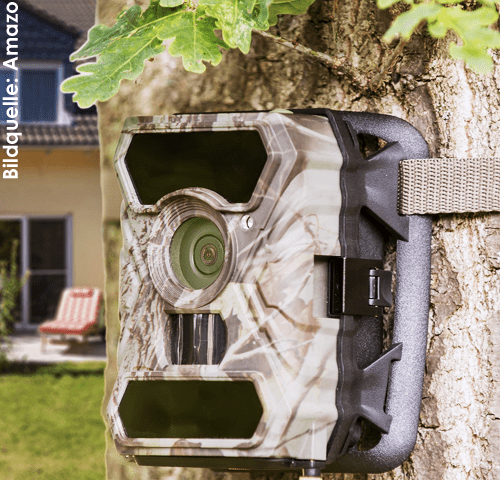 Who has his own piece of forest, wants to track down animals in his garden or a photo trap as a surveillance camera for securing the property would like to use, there is a large selection of wildlife cameras available on the internet. Here I would like to show you the Amazon bestsellers of photo traps and wildlife cameras that you can use for home and garden, but also for animal observation.

A game camera with night vision function is suitable for game observation, but also for building and property security. Thanks to the motion sensor, a wildlife camera reliably records images and videos as soon as animals or people move in the field of vision - ideal as a surveillance camera!

This handy device in camouflage design brings you full HD images including date, time and temperature directly to the supplied and already in the device memory card. The necessary batteries are also included in the scope of delivery. However, the photo trap can also operated continuously by power supply become. Whether deer in the forest, birds in the bird feeder or burglars on the balcony - this wildlife camera takes high-resolution pictures of them; either up to 5.500 photos or up to 70 minutes of video.

Here are the highlights according to the manufacturer:

Here is a quote from one of the many 5-star ratings for the wildlife camera: "I found it positive that the camera came with easy-to-understand, detailed operating instructions in German. I found it very good that the camera was already ready for the start. [...]
The picture quality during the day is excellent. If you consider that for less than 140 euros you can get a camera with a motion detector that can last for several months on a set of batteries, then the image quality is really astonishingly good. [...]
At night the camera only takes black and white pictures. The image quality at night is okay, but it cannot be compared with images taken during the day. But at least because of the night LEDs you can still see who is around the camp even in complete darkness. Smaller animals are also recorded well."

You get the camera with four batteries and an 8 GB memory card for just under 46 euros on Amazon:

Update December 19, 2016: Information from the manufacturer

The maker of the Wild Vision, SecaCam, got in touch by e-mail and provided a little more information about products similar to the one presented above. Do not understand this update as advertising - but if you already get the information ready, you can share it;)

It was said, for example: "In addition to our test winner Wild-Vision Full HD 5.0 ​​(at Amazon under the search term "Wildlife camera" in 1st place), we also sell our successor products - SecaCam HomeVista and SecaCam Raptor. These are the direct further developments of the Wild-Vision Full HD 5.0. [...]The new releases from SecaCam have an astonishing trigger time of 0,4 seconds and, thanks to the interplay of 56 black LEDs and the developed Dark Motion Freeze technology, make impressive recordings during the day and especially at night.[...]

The SecaCam Raptor has been specially developed to monitor an object in detail. Due to the 52 ° shooting angle, it directs the focus to a specific object and you won't miss any detail. The SecaCam HomeVista has a 100 ° viewing angle and is therefore perfect for monitoring large areas or for maintaining a complete overview in narrow spaces. [...] The SecaCam cameras are versatile. This means that you can use the cameras to monitor your private property without any problems, for example to track down intruders or newspaper thieves. You can also use the cameras to watch deer grazing in a forest or hang the camera to monitor a bird breeding station."

It doesn't sound too bad, does it? And since the two newer wildlife cameras and photo traps from SecaCam also have good and very good ratings on Amazon, I'll link them to you right away:

Also this wildlife camera that also with night vision LEDs and a display for viewing pictures and easier operation is a bestseller on Amazon. There is currently even a 10% discount on the device, so that the price slips below 100 euros (as of December 15, 2016). The three motion sensors cover a wide angle of 120 ° and the low glow LEDs that are also used here ensure good night shots. Pictures and videos are also in full HD or 12 megapixels. The housing is designed in a camouflage pattern.

Similar models from other providers

It is amazing how identical models are advertised differently. The VicTsing model is available with a slightly different camouflage, but otherwise the same construction, also from Crenova and Linkpower. The values ​​given as original prices on Amazon range from 190 to 220 euros. However, these identical models are currently reduced to less than 100 euros. In addition, there are also bestsellers on the shipping side. Here are the links: Crenova model / Linkpower model.

In addition to the bestsellers and other good or very good rated photo traps on Amazon, I also found a few models there for the small budget. But what you save in money here, you mostly forfeit in terms of quality. The weather and weather protection, the image quality, the durability, the operating temperatures - here and there or even everywhere you have to make compromises. In addition, and that is the main reason why I do not link the models here, these devices under 90, under 70, sometimes under 50 euros do not have good ratings; certainly not very good ones. So they are not for quality lovers.

Legal use of wildlife cameras? The hunting association takes a position

The question of the legality of game cameras near forest trails was discussed a few years ago. While the camera is of course primarily intended for observing wild animals, it may still capture walks or hikers running through the forest. The protection of privacy is out of the question from the point of view of data protection, but the legal situation is made more difficult by the fact that each federal state can decide independently on this matter.

The German Hunting Association has for the reason an article with recommendations written, but what the practical implementation looks like for foresters and hunters depends on the federal state. However, here are the principles of the DJV:

Legal situation with surveillance cameras and wildlife cameras - what do I have to consider?

In the private area you can use the wildlife cameras without hesitation, if you take into account that the camera does not capture a public area or the property of the neighbor. The consumer advice center has in this regard an article published on the legal situation with the use of surveillance cameras, which also applies to wildlife cameras and photo traps.

Conclusion and your experiences with photo traps

From time to time this page is about solutions for them Building surveillance, For networked security cameras and the like more. If you want a secure way to take automatic pictures and videos that doesn't need to be networked and maintained, you can buy a trail camera. It works independently of WLAN, Apps and complicated operating systems. Of course, if it were to send the pictures directly to the iPhone or iPad, the photo trap would be almost perfect - but the models mentioned above are at least independent, also in terms of power supply.

Have you had any experience with a wildlife camera or photo trap? Which model do you think is recommended? Feel free to leave a comment on the topic! :)

By the way, we have an article on how to continue reading Tracking down wildlife cameras in the forest or in nature in general can.