Fusion Drive on the Mac: Combine SSD and HDD hard drives into one volume

The "Fusion Drive"from Apple is an option that has been available for Macs in the Apple shop since October 2013. Technically, it is a combination of an HDD hard drive (the models with rotating magnetic disks) and SSD (hard drives that work with flash memory). The operating system combines both hard disks into one volume, so that instead of two separate disks, you only see one large hard disk in the Finder.

Apple Fusion Drive - HDD and SSD hard drive effectively combined. The article explains the advantages and disadvantages of this and how you can set up a Fusion Drive on the iMac at a later date.

Benefits of the Apple Fusion Drive

The advantages of the Fusion Drive are as follows:

Cons of the Fusion Drive

In addition to the advantages, there are also some disadvantages that you should keep in mind when combining your HDD hard drive with an SSD to form a volume:

On the English-language Anandtech blog I was able to find a post in which someone used a Fusion Drive in comparison to the HDD and a pure SSD in his everyday life. The results of the various tests are hardly surprising: the pure SSD is always the fastest solution, the pure HDD (hard drive with rotating disks) the slowest and the Fusion Drive moves somewhere in the middle. 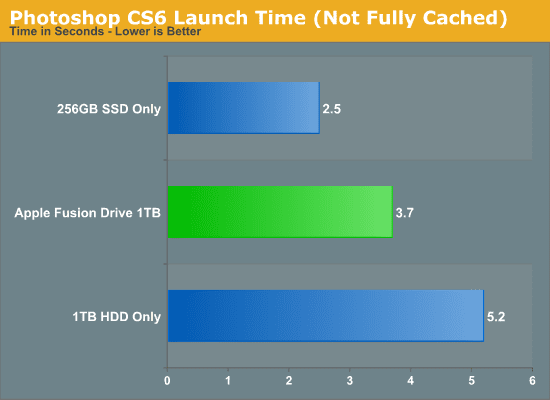 Do you prefer Fusion Drive or pure SSD?

If you really want maximum performance and are ready to make some money for it, you should buy a pure SSD. Here, too, you can connect an external SSD to the Mac (via Thunderbolt or USB 3.0) and then copy the entire system with all the data to it (the Super Duper or Carbon Copy Cloner help here). Then you can also boot from the external SSD and use the internal drive as a Time Machine backup volume, for example. So you always have the solution with the best performance.

Upgrade MacMini or iMac with external SSD to Fusion Drive

If you still have an old Mac with a slow hard drive installed, you still have a few options to get it faster. On the one hand, you can (or have it replaced) by yourself (or at an Apple dealer) for an SSD hard drive. Alternatively, you can pack an external SSD in a Thunderbolt housing and then create a Fusion Drive with the internal HDD hard drive. Of course, this is only possible if your Mac already has a Thunderbolt connection.

If this is available, then you can, for example this Delock Thunderbolt housing (Don't forget the Thunderbolt cable!) And one 128 GB Samsung SSD build an external SSD, which then becomes part of the Fusion Drive. The 128 GB are usually easily enough, as the operating system usually only swaps out a large number of small files on this disk. The SSDs that Apple itself installs in the Fusion Drives are usually many times smaller.

Finally, all you have to do is combine the two hard drives into a Fusion Drive volume. I will write instructions for this in the next few days.