With the 4th generation of the Apple TV, games based on tvOS can be installed for the first time. As a result - and of course due to the 4K resolution and the fast processor in the new ATV (abbreviation for Apple TV) - the set-top box is for the first time serious competition for game consoles. It is connected to the TV set via the HDMI connection and the games can be installed and purchased for the Apple TV via the App Store.

Update May 2021: It has been six years since the first version of this article. In the meantime, the Apple TV 4K with A12 Bionic Chip and HDMI 2.1 for high frame rates has been released. But controllers can also be connected to this in order to play video games via tvOS - for example in Apple's video game subscription "Apple Arcade". You can find more information below in this post as a further update;)

The best game controllers for the Apple TV 4 - my recommendations!

Siri Remote as game control for the Apple TV

For the first gimmicks on the Apple TV, the "Siri Remote" remote control, which is supplied with the Apple device, is certainly sufficient. The integrated touchpad can be used to control characters and the buttons can perform actions in the games.

Which game controller is suitable for the ATV?

The games are usually only really fun with a real game controller, which is also comfortable to hold and which can be operated with two hands. For this reason, Apple has also created the option of connecting up to 4 controllers to the Apple TV. These are coupled via Bluetooth 4 and are then available as input devices.

If you are looking for a game controller for your ATV 4, you should look out for the abbreviation MFI. MFI means "made for iPhone" and gives you the certainty that the controller works with iOS devices such as the iPhone and iPad. And the game controllers that work with iOS should usually also work with the Apple TV - even if it runs with the tvOS operating system. I am going to introduce you to an MFI controller below and consciously another one that also works (from iOS 8), but is not MFI-certified.

Since it is always asked: No, you do NOT need a jailbreak to use a gamepad on the iPhone and iPad. The controllers can easily be coupled as input devices via Bluetooth and can then be used for games. This is also possible on the Apple TV 4.

My recommendation: Steelseries and Qumox gamepads

There are two manufacturers who have very well-rated devices on the market that have already been tested by users with the new Apple TV:

If you order the Apple TV 4 in the Apple online shop, you can get the Nimbus + order as an accessory. It is, so to speak, recommended by Apple as a controller for gaming. MFI certification is a matter of course. The controller works with Bluetooth 4.1 and can be paired with iPhone, iPad, Mac and Apple TV. It has an internal lithium-ion battery that can be recharged via the Lightning connector.

A special goodie for Apple users: when you buy the Nimbus + controller you get up to 4 months of Apple Arcade free of charge.

I mention the "old" Nimbus controller here, as some people have strong criticisms of the Nimbus +. For example, the control pad should click and the overall processing should be a little rickety. With some people it also seems to happen that the Nimbus + "breaks" - that is, it switches off and cannot be started anymore. All points that you might not want and therefore prefer to the tried and tested old nimbus without a plus engages. 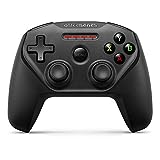 The controller from Qumox comes in a chic retro design. It also works with Bluetooth and can be used on Apple TV 4 as well as on iPhone, iPad and Mac. It is much cheaper (around 30-35 EUR), but it also has very good ratings from Amazon customers to get. It has the typical SNES button configuration A, B, X, Y and L & R as well as a control pad.

The Qumox NES30 game controller is NOT MFI-certified and therefore does not meet the requirements that Apple has for game controllers. Nevertheless, it can be connected to the iPhone or Apple TV via Bluetooth and without jailbreaking (Photo: Amazon).

Since some elements on the controller are not built as prescribed by Apple's MFI certification, you unfortunately have to forego this "guarantee" with the NES30 game controller. Most games will still work with the Qumox Game Controller. The one is available Qumox NES30 for about 35 EUR on Amazon.

Conclusion: MFI certification is my recommendation

If you don't want to experience disappointment, you should opt for the Steelseriesn Stratus XL. The price is quite high, but you get the assurance that it works for all games that work on the Apple TV with a game controller.

Gaming controller for the Apple TV 4K from 2021

On April 20, 2021, Apple presented its new set-top box with the A12 Bionic Chip (known from the iPhone models from 2018) and with HDMI 2.1. This is also compatible with wireless gaming controllers, above all with a model from SteelSeries. Details and prices of the new Apple TV 4K from 2021 can be found with this link. Here you can continue with the compatible gamepads.

Among other things in the official Apple online shop, but also at Amazon with Prime Shipping, you will find the “SteelSeries Nimbus +” gamepad certified by Apple for its TV box. This can also be used on other Apple devices such as the iPhone, iPad or Mac. A separate version of the gamepad is also available for Windows PCs and Android devices. Both versions offer two joysticks, a directional pad, A, B, X and Y buttons as well as two shoulder buttons on the left and right. There is also a home button and two other buttons for the menu, etc. A holder for the iPhone is included in the scope of delivery.

The advantage of the SteelSeries Nimbus + Wireless Gaming Controller for Apple TV, iPhone, Mac and Co. is that it is officially licensed by Apple. This ensures compatibility with tvOS, iOS, iPadOS and macOS. The MFi-certified video game controller also offers a battery life of up to 50 hours. You can get it at Amazon for 59,99 euros. Prime members benefit not only from free shipping, but also from fast Prime delivery. So you can quickly enjoy Apple Arcade - or the trial subscription of the service that becomes available with a new Apple device - to the fullest.

Details, all Amazon links and an example of compatible batteries can also be found here: Game controller for Apple TV 4K and Apple Arcade (Posted on April 22, 2021). If you are interested in the Apple Special Event on April 20, 2021, where other products from Cupertino were also presented, then take a look here: Apple Event - Keynote Summary on April 20, 2021.