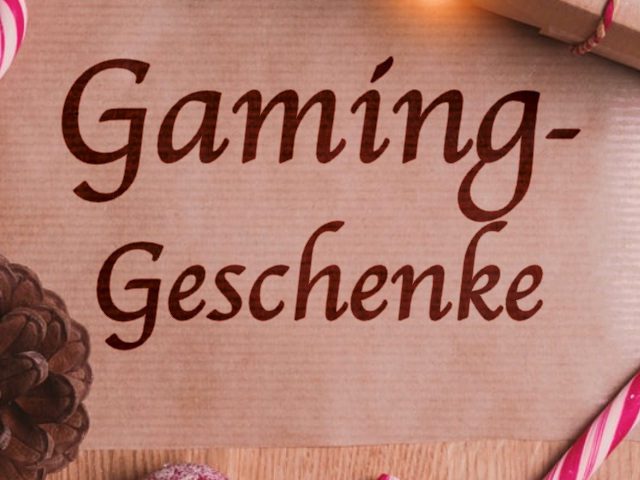 Gaming can be an extensive hobby. As a gamer, you are happy when a collector's item, game, device or accessory is added to your collection as a gift. I already met you yesterday a selection of game capture cards shown. Today it should be about less technical, but more fun, informative and functional gifts. This includes cheap mini consoles, books, accessories for various devices, credit for Steam, Xbox, PlayStation, Nintendo Switch and more.

Whether retro gaming, credit for current game platforms or literature on video game history: Here you will find gift ideas for gamers for Christmas 2020 :)

The design and operation of this mini-console is based on the old arcade machines of the 80s and 90s. The control works accordingly via a joystick as well as an A and a B button. The 240 games, which are mostly rip-offs of classic games, are to be arranged in the 8-bit range. They are shown on a 2,5 inch TFT display that has lighting. The three AA batteries (preferably rechargeable batteries) are not included in the scope of delivery. The small console and alternatives to it can be found with this link. Matching batteries Is there ... here.

Nerd and gaming books for the relaxed Christmas season

For everyone who is fascinated by the history of video game consoles, I always recommend “The Game Console” by Evan Amos. I have the book for you already presented two years ago. It shows the first home consoles for video games from 1972 as well as the Apple Pippin from 1996 or the Nintendo Switch from 2017. Handheld consoles such as the Sega Gamegear or the Nintendo Game Boy are also included.

Richard Moss' The Secret History of Mac Gaming is just as interesting. I have this book for you too already presented here in the blog. It is interesting to note that early computer games in the 1980s were primarily programmed on and for the Mac. It was not until the 1990s that developers and studios preferred Microsoft's Windows and DOS platforms. This book will tell you what the history of Mac video games was like.

“Bitmap Books” describes not just a book, but a publisher that offers various titles related to video games, their genres and the corresponding history. The book series was mentioned for the first time here on the blog a year ago. In the linked article you will find various issues on NES and Famicom games, on SNES and Super Famicom titles, Commodore 64, Amiga and NEOGEO. A special volume also deals exclusively with point-and-click adventures.

The book “Stark verpixelt” by Christian Keichel is a little more text-heavy and less concerned with a graphic spectacle with screenshots of old games. "When technology-loving students first used computers for games in the early 1960s, it was just hacking. From this, however, an established leisure time entertainment quickly developed. From then on, every generation of games could fall back on more memory, colors and speed“, Already introduces the blurb. Take a look at the book Is there ... here.

Gaming headset with very good reviews at a low price

A gaming headset can be a real hot topic. Good fit, suitability for glasses wearers, rigid or adjustable microphone, connection via 3,5 mm jack or USB-A, and so on ... But where everyone seems to agree is the Beexcellent gaming headset at a low price on Amazon. The headphone-microphone combination is connected to a PC, Mac, mobile phone, tablet, Nintendo Switch, PS4, PS5, Xbox or their controller using a jack, jack splitter or USB adapter. The customer reviews are mostly provided with 5 stars.

Steam credit as a game voucher

Steam is the largest and most popular game platform from which games for various platforms (Windows, macOS, Linux, etc.) can be downloaded. As with buying DVD-Roms, this obviously costs money. You can find Steam credit in the form of voucher cards, for example, in supermarkets, discounter, in some post offices and in other places. You can also buy Steam credit digitally from Amazon. Then the card will be sent directly to your home - 20 Euros or 50 Euros (unfortunately with a large surcharge).

There is no surcharge for other solutions for game credit via Amazon (at most for shipping). A 25 euro credit therefore costs 25 euros. For the Xbox there are offers from 10 euros to 100 euros in various levels. The best thing to do is to look for the right one from this list. It looks the same with the PlayStation. If you want to give away credit for the PlayStation 4 or PS5, then take a look at this list.

With regard to Nintendo, you may have to be careful. Because here there is sometimes a distinction between credit for the eShop, which is still active for the Wii U and Nintendo 3DS, and credit for the eShop on the Nintendo Switch. However, credit for all three offers is available here: Product page with 15, 25 and 50 euros as Nintendo credit (download codes without a physical card).

Here in the blog there were always a few posts with gift ideas, special gift lists and individual presentations of gadgets, books and more. In the following you will find a small overview, in case you haven't found the right thing for the above items: