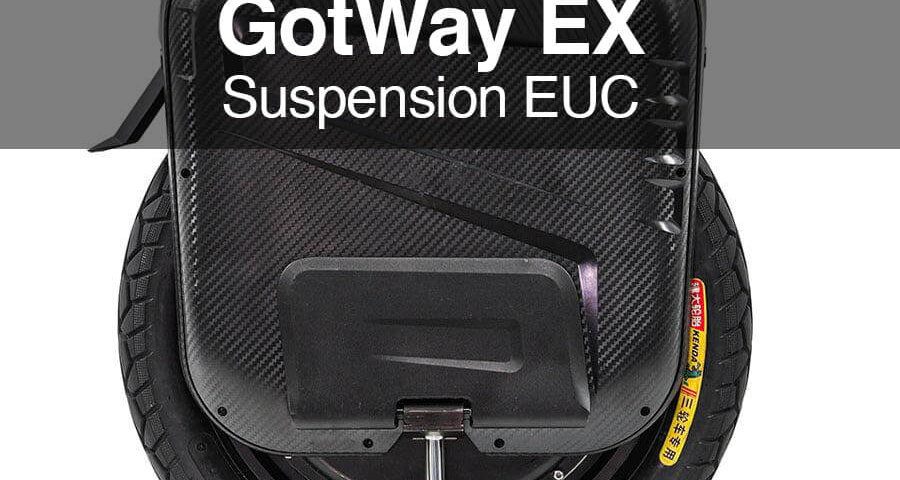 After KingSong launched electric unicycles with suspension with the KS S18 and Inmotion with the V11, it was only a matter of time before GotWay delivered a suspension model. The technical data - as usual from GotWay - are at the top of the flagpole. Before we get to the opinions of the first test drivers, I would like to first introduce the specs of the GotWay EX. 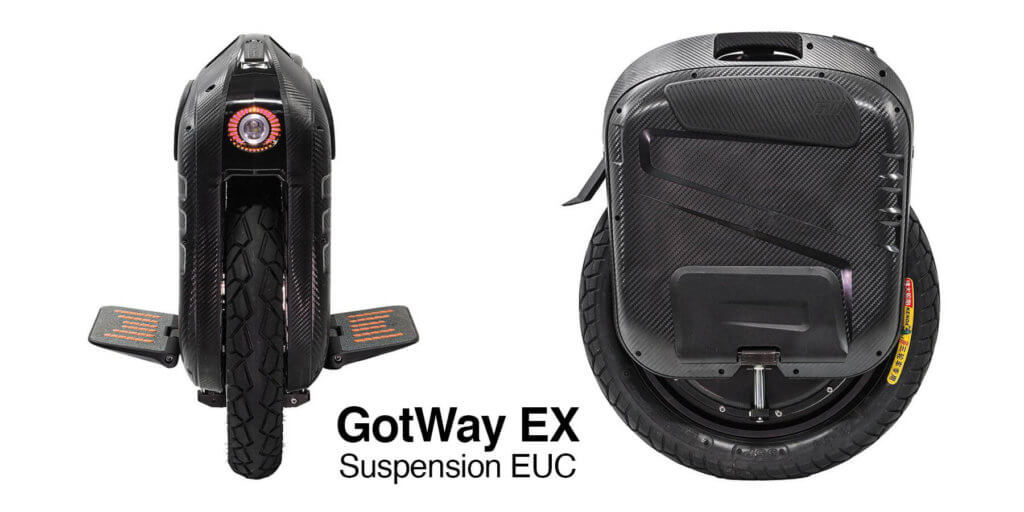 The GotWay EX is the first GotWay unicycle to be equipped with a suspension (Photos: MyEWheel.com).

Technical data of the GotWay EX

5% discount when purchasing the Gotway EX

If you are interested in the Gotway EX, you can get it with free shipping via the MyEWheel.com shop buy cheap. With the code "SIRAPFELOT" you also get a 5% discount on the purchase price.

» continue to Gotway EX at MyEWheel

While KingSong uses a steel spring with the S18, as you may have seen on some full-suspension mountain bikes, Inmotion and GotWay use air suspension. The term "oil suspension", as you sometimes read it, seems to be technical nonsense, since both models (steel and air) use oil for damping.

The air suspension from Inmotion and GotWay have the advantage that they can be adjusted to the driver's weight and weigh less. In return, the more complex construction with more seals is a disadvantage. 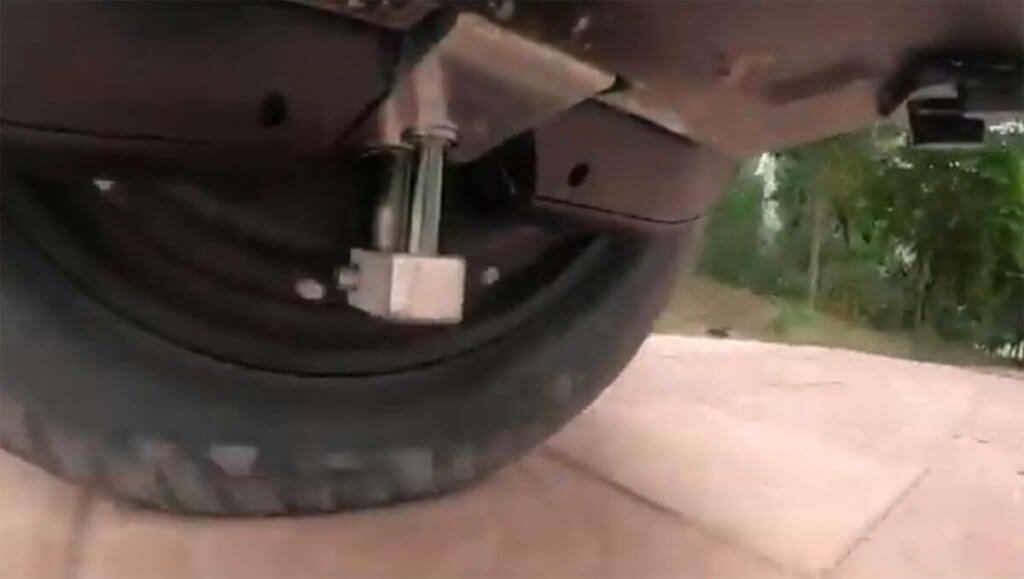 The suspension looks out from under the footrests of the GotWay EX and could thus restrict the ground clearance a little.

Little experience of the GotWay EX is available

The GotWay EX Suspension Unicycle is not yet available in stores and what you can currently see in photos and videos are prototypes, which are probably already close to the sales model.

To put together the blog post, I looked at various forum threads and YouTube videos, but there are still not many first-hand experience reports.

In this video you can see the GotWay EX as well as the Monster Pro and also the well-known unicycles KingSong S18 and Inmotion V11 in practice. The pictures of the GotWay EX already look like a very solid electric unicycle, but you will have to wait a few more weeks after the sales start until you get more precise practical values ​​for durability. 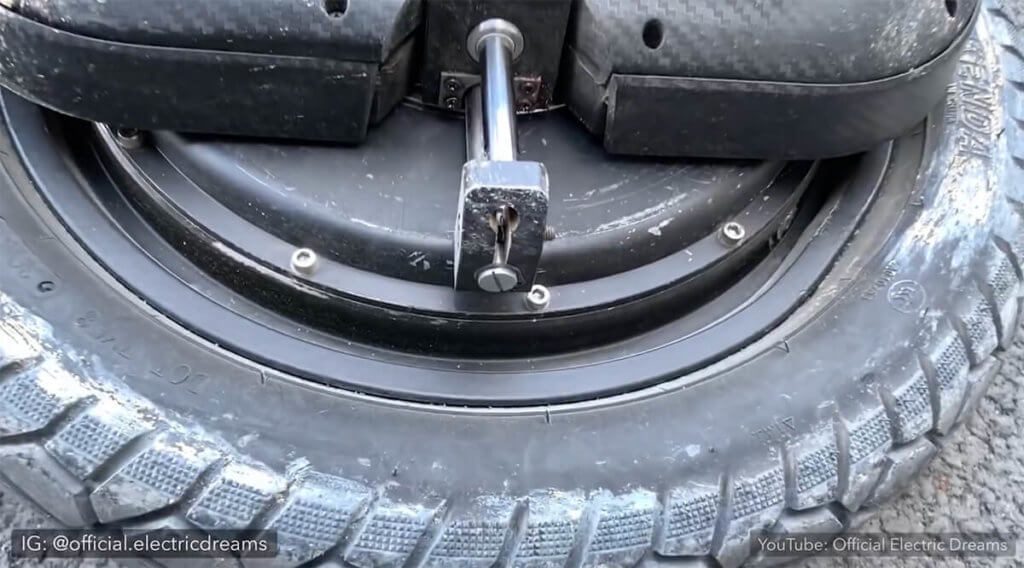 The thick tires and suspension ensure that the GotWay EX feels just as comfortable on fast roads as it does on bumpy slopes.

Plus points of the GotWay EX

The GotWay EX is currently the only 100 volt EUC with suspension on the market. The advantage of the higher voltage is a higher maximum speed, which is "bought" by the fact that the unicycle has less acceleration and torque than an 84 volt model.

According to reports from various riders, the 84 volt unicycles also feel more “responsive” than the 100 volt models. That means they react faster to the driver's input. Overall, however, the differences seem to be so marginal that you might not notice them without a direct comparison.

Thanks to the large battery pack, the GotWay EX is also able to achieve a greater range than the Inmotion V11 and the KingSong S18 can. However, this is also associated with a higher weight, which makes it more difficult to maneuver or carry the bike.

The bottom line is that from my point of view the GotWay EX is an electric unicycle for extremes: If you want to go very fast or cover very long distances, the EX should be the right choice.

However, if you are more sporty on short distances and also like to drive through rough terrain, where you can't reach speeds of 50 km / h or more anyway, you should look at the KingSong S18 or the Inmotion V11.

While KingSong and Inmotion usually provide reliable and durable unicycles, GotWay is known for the fact that the covers fall apart quickly and you often find untidy electronics and tangled cables inside, which may even be held in place with hot glue.

For this reason I hear subjectively more often about heat problems and cutoffs with GotWay unicycles than with other models. But you usually get unicycles that have extremely good technical specifications. 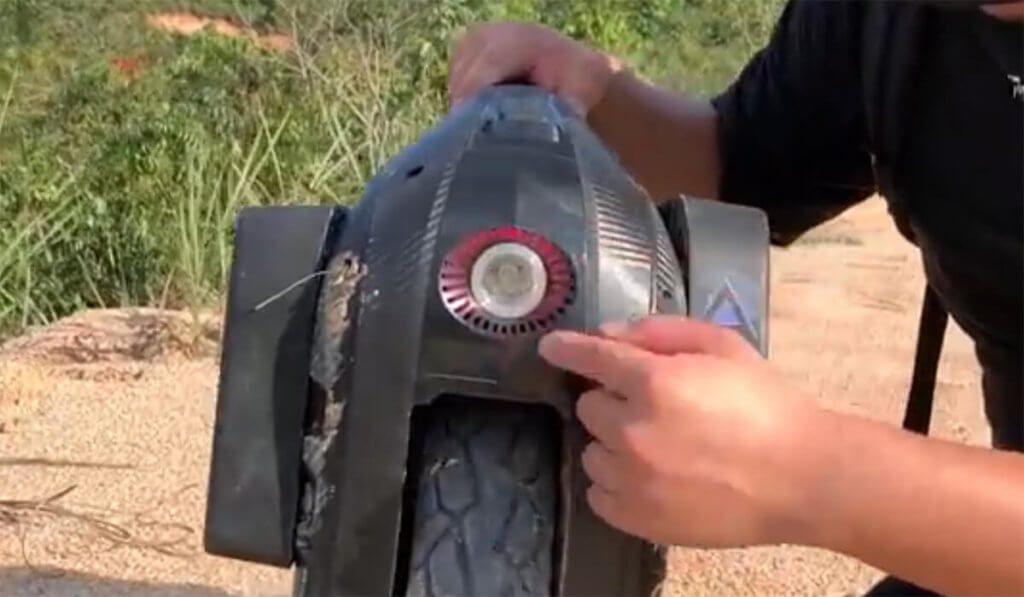 The front light of the GotWay EX not only emits white, but also red light and is therefore reluctant to be seen on the streets of many countries (Photo: Official Electric Dreams).

Front light: strong, but may not be legal

Another feature that may be well meant but poorly thought out is the front light, which has been "embellished" with a red ring light. That may look good, but it causes trouble with the police in many countries, as colored light is not allowed in the front lights of vehicles. Here you have to look at the laws of the country in which you are. In Germany, unicycles are generally not allowed on the road. The front light would only be the icing on the cake ... 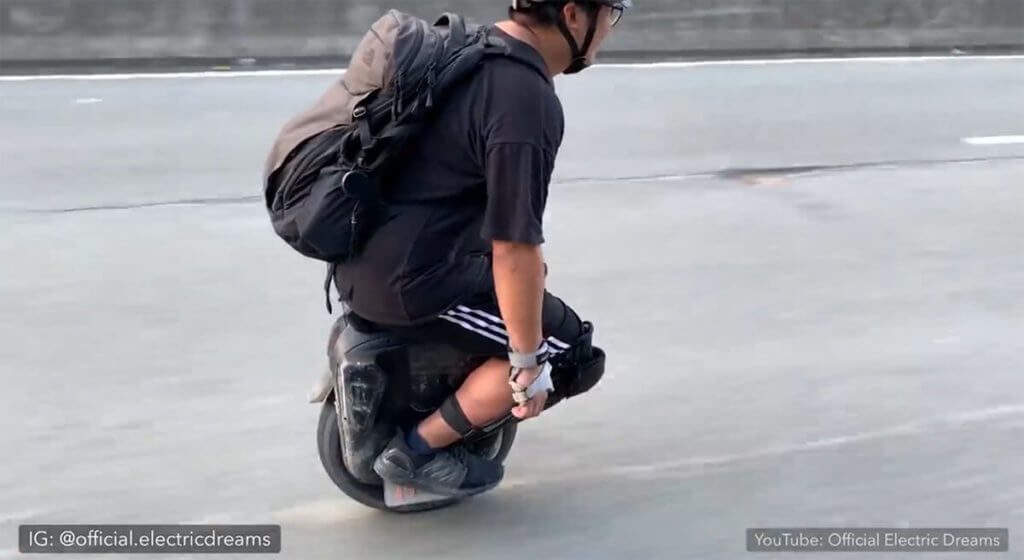 With the seat supplied, you can cover long distances while sitting. However, you should practice this before you do it at 50 km / h.

The housing of the GotWay EX is the new design of the manufacturer. The central handle makes handling the EX relatively easy despite its weight.

The goodie is that you get the new GotWay seat attachment for the EX. This seems to have been improved so that it does not come off the unicycle even on bumpy surfaces.

Like the KS S18 and the Inmotion V11, the GotWay EX also comes with a 20 × 3 inch tire. The 3-inch tire thickness makes driving in scree, on dirt roads or on firm sand much more comfortable. For this reason I am glad that GotWay also decided to install a 3 inch tire here.

As you have already seen on the Inmotion Z10, the larger the tire size and thickness, the less maneuverable a unicycle becomes, as you have to use a lot of physical effort to steer the bike. A little unicycle like that MTen3 on the other hand is very easy to steer.

For this reason (and because of the high maximum speed) I would not recommend the GotWay EX for beginners. For your own safety, it's not a bad idea to start riding on a smaller bike like the Inmotion V8, Inmotion V10F or the KS 18L to practice. 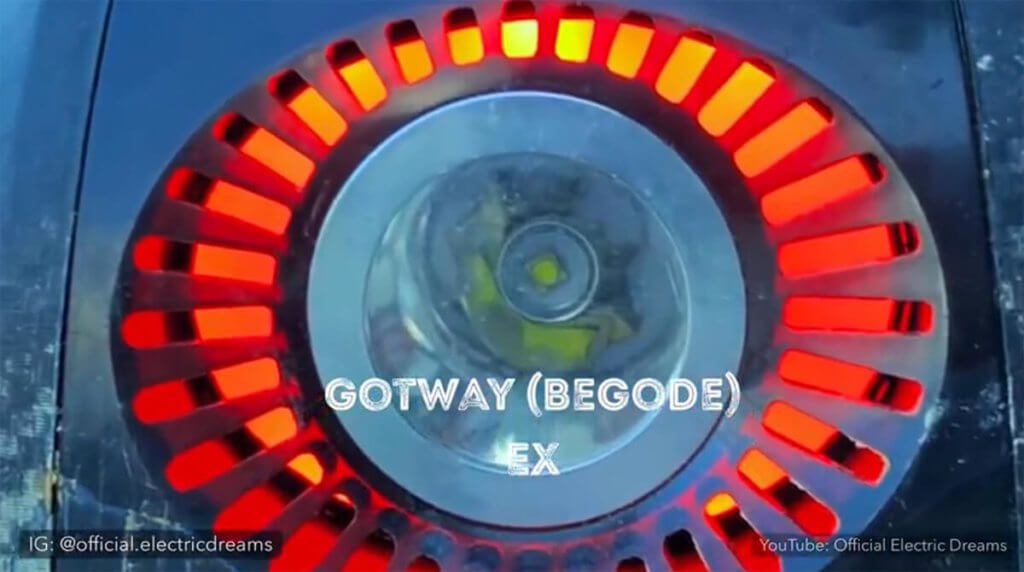 The headlight is definitely an interesting construction, but I'm afraid that in everyday life you will have problems with the police more quickly when you are out and about in the dark.

Is Veteran the Better GotWay?

A comment from a forum discussion sounded like this: It would be nice if the GotWay EX got a durable and sturdy case like that of the veteran Sherman.

Funnily enough, the “Veteran” brand was founded by former GotWay employees. I'll guess because they were no longer satisfied with the poor quality of GotWay and wanted to build high-quality unicycles that still have the extreme performance of GotWay bikes.

With the veteran Sherman, they brought the fastest unicycle onto the market, which is also superbly processed. The GotWay EX wants to top the top speed of 61 km / h and advertises the EX with 68 km / h. 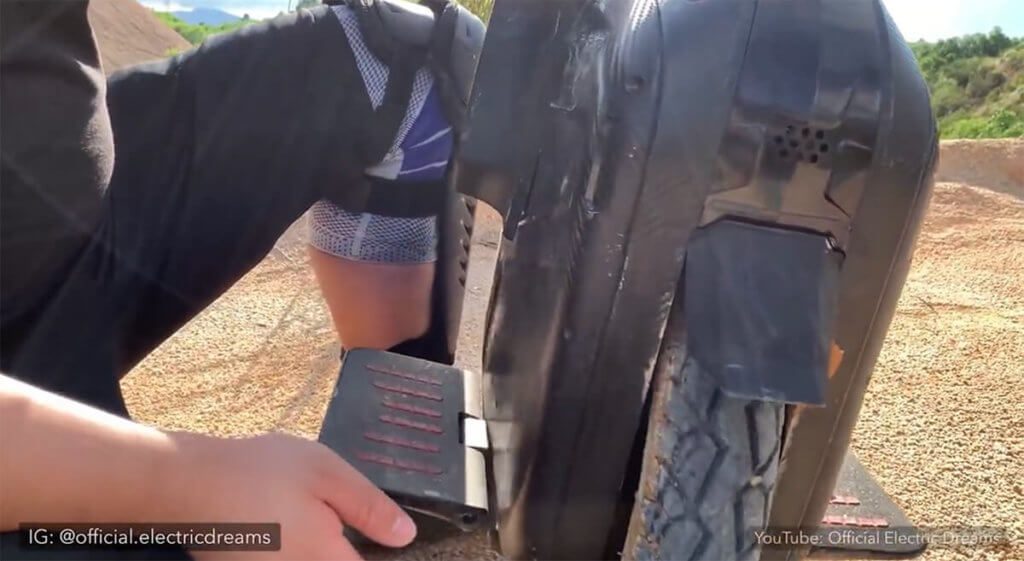 The footrests of the EX are quite large at 25 cm and are therefore also suitable for longer feet.

Conclusion on the GotWay EX

It is of course too early for a final conclusion, because the EUC can only be pre-ordered. For me, however, it would be out of the question as I have doubts about the quality control at GotWay. The suspension unicycles are all completely new designs and I think none of the models had a long test phase, so that the manufacturers were all represented on the market with a suspension unicycle relatively soon.

My recommendation would be to wait the first few weeks after the market launch and check forums and videos to see what the opinions of the first owners are.

However, one can already say that the GotWay EX is more for people who love the extreme. The EX stands out from its competitors in terms of weight, top speed and range.

Personally, I'm more of a leisurely driver who cruises at a maximum of 35 or 40 km / h and doesn't need a range of 160 km. For this reason I tend to prefer the Inmotion V11 or the KingSong S18.