Stickers and sleeves made of graphene: longer battery life by cooling the smartphone? 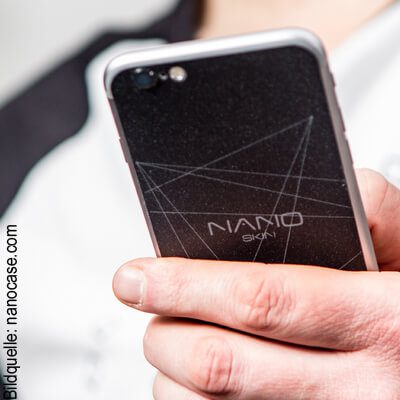 Among other things, the Nano brand from Stockholm Industries AB from Sweden offers the NanoSticker and NanoSkin on the Nanocase website Solutions from graphs, which should increase the battery life of smartphones. With the smartphone cases and stickers made of graphene, a carbon compound, the cell phone is to be cooled and the battery life is to be extended; by up to 25%. What graphene is, where you can buy smartphone cases and stickers made of graphene and you can find out a lot more in this post.

Graphene is offered by Nano from Sweden as a solution for longer battery life for iPhone and co. The carbon compound is much more than just heat conductive. Info in this post.

What is graphene, what makes the carbon compound so important?

When it comes to using it as a sticker or cell phone case, the thermal conductivity of graphene is particularly important. For example, the NanoSkin sticker from Nano from Sweden or the NanoSticker, a round version for several smartphone models, use the cooling effect of graphs to extend the battery life of mobile devices. Up to 25% more battery life is promised, but reliable studies are not yet available. 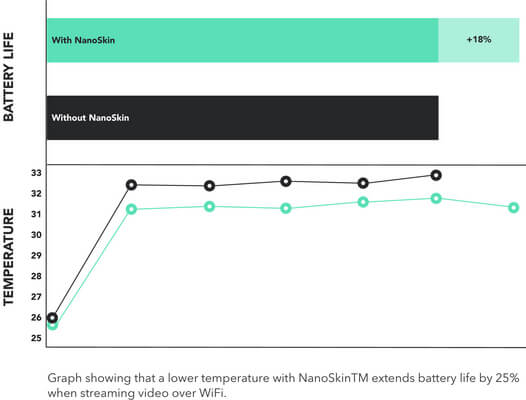 But graphs (with the emphasis on the second syllable, not like diagram lines on the first) is much more! The carbon compound is built up from carbon atoms arranged in a honeycomb shape and brings according to the wiki "Unusual" properties with. Graphene has become a hot topic in physics and chemistry in recent years. Among other things, n-tv reported back in 2015 about the "miracle material". It is not only harder than steel, but also as a semiconductor and therefore noteworthy as an alternative to silicon. A 2013-year EU funding project to research graphene and its potential has also been running since 10. Info about it can be found here. "This fabric could become the wonder material of the 21st century, like plastic in the 20th century, and even replace silicone in ICT products.“, It says in the EU paper.

In view of the importance that the EU attaches to the material, the use of the carbon compound graphene as a mobile phone sticker seems a bit banal. However - if the information on extending the battery life is correct - buying NanoSkin or NanoSticker products is probably worthwhile.

Here is a video from the manufacturer, in which he discusses the problem of battery life and its solution:

Nano offers in its Online-Shop including the NanoCase, the NanoSkin, the NanoSticker and power banks with NanoInside. The prices are in the lower to mid-range, the NanoSkin, for example, costs 19,90 euros for Android smartphones and the iPhone. The products cannot be found on Amazon; if you search for “graphs”, you will get some (scientific) reading about graphs or graphene in English. If interested, click here.

Short legal notice: the brand and product names in this article are all protected, but the TM was not always added - that's basically what it is called Nano ™, NanoCase ™, NanoSticker ™ and NanoInside ™.

What do you think of graphene or graphene as a miracle material?

It is hard, suitable as a semiconductor, it dissipates heat and has many other interesting properties (see Wikipedia and EU declaration), the material graphene made of disdainful carbon. Do you already know the material, are you already using it? What do you think of the topic?