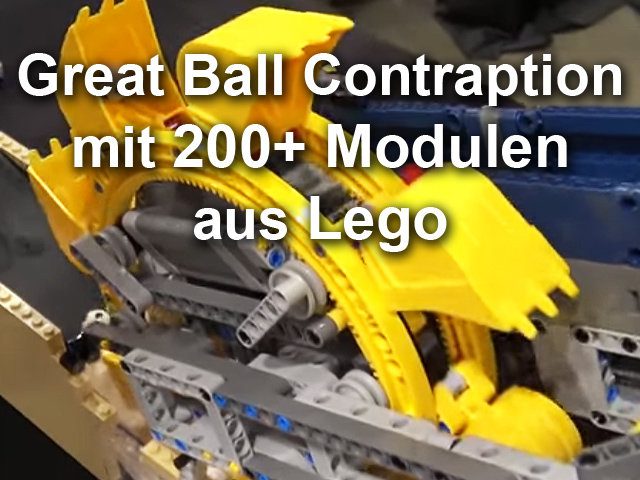 The Brickworld Chicago, a Lego convention held on June 17-18, 2017, featured a Great Ball Contration (GBC), a large device in which Lego balls are moved automatically. The partly motor-driven, partly mechanically running modules added up to over 200 individual pieces at the event. Since Lego in a variety of forms - from Lego Star Wars to Lego robots - is a big topic here in the blog, the large device at Brickworld Chicago 2017 should not go unmentioned at this point.

Great Ball Contraption is the name given to large, ingenious devices that move balls from A to B. More than 200 GBC modules built from Lego were connected in series at Brickworld Chicago 2017.

Whether football, basketball or other round Lego marbles, they are all moved in the following video. Tom Atkinson, a veteran in the GBC scene, will guide you through the individual devices and modules. Moving and transporting Lego balls is one of the favorite goals of hobbyists and builders of Lego machines. Children also get easy access to the functionality of technology, mechanics and machinery - this video can therefore be viewed as a teaching piece:

As I said: here in the Sir Apfelot blog there are reports about the popular and world-famous plastic building blocks. For years, information, details, offers and background information on individual sets or topics have been provided here. Far ahead are, for example, the Lego sets from Star Wars - for example in this post: The Lego Death Star for hardcore fans - or: Star Wars for adults. If you expect a little more interaction from your Lego set or want a bigger learning factor for the children, you can stop by here: Construction toys LEGO Mindstorms EV3: Control and program robots with Apple devices.

What do you think of Lego?

What do you think of the diverse world of plastic and fantasy? Are you the collectors or the hobbyists? Feel free to leave a comment on the topic here;)