From 2006 to 2015 Apple MacBook models had a MagSafe connection, a magnetic power supply interface that should make the Apple notebook “fall-proof”. With the MacBook early 2016 and the MacBook Pro models late 2016, MagSafe was replaced by USB-C. If you are currently looking for a USB-C dock with a magnetic connector for a charging cable to equip your MacBook or MacBook Pro with, then this post is made for you.

The BreakSafe USB-C cables for charging MacBook and MacBook Pro have a magnetic connector. A good replacement for the missing MagSafe port, but not the only one.

BreakSafe instead of MagSafe: Griffin cables for MacBook (Pro)

The manufacturer Griffin has already delivered for last year's 12 inch MacBook. The Griffin GC42251 BreakSafe Magnetic Cable USB-C covers the power supply on the MacBook and ensures a certain level of security should someone trip over the cable. The same can only be used for the power supply, not for data exchange.

Then Griffin will also be offering a BreakSafe cable for the MacBook Pro late 2, probably from Q2017 2016. Contrary to the model described above, this magnetic charging adapter should bring 100 W of power instead of 60 W. Is this the reason for the chunky look?

From Q2 2017: The Griffin BreakSafe charging cable with USB-C connection and 100W power for the MacBook Pro late 2016.

Wherever you find out about the new Griffin BreakSafe: the word "ugly" is often used ... In addition, the model for the MacBook Pro is not yet available. So now a couple of alternatives.

Magnetic USB-C charging cable for MacBook Pro and other devices

Here are three models that seem suitable or indicate on the product page that they can be used with the new MacBook / MacBook Pro. As a precaution, however, information is not guaranteed: 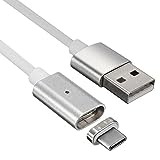 Is MagSafe an issue for you?

Do you think it is important that the notebook's power cable is attached magnetically? Or should MacBook (Pro) users and other people in the coffee shop or co-working space be more careful and just not trip over the cable? Do you think it's good that Apple has abolished the MagSafe connection on MacBook and MacBook Pro and has more to do with it USB-C / Thunderbolt has set? Feel free to leave a comment with your opinion!