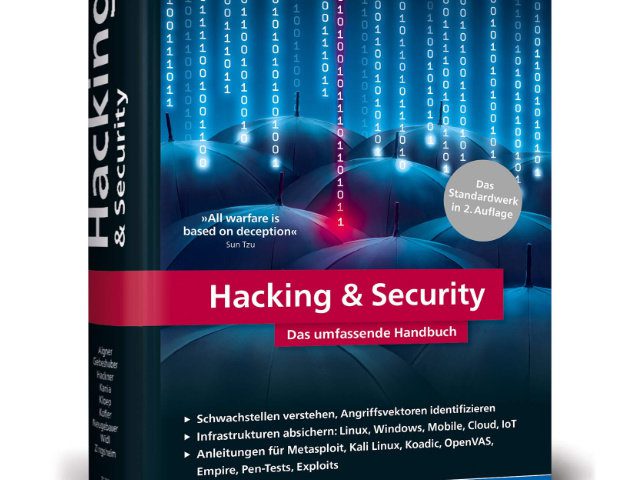 The second, updated edition of “Hacking & Security: The Comprehensive Handbook” from Rheinwerk-Verlag has been available since the end of June. The standard work on IT security is aimed at specialists and admins, but can also be used to learn something privately. Because the more networked everyday life becomes and the more you rely on your smartphone and smart home, the more you might want to immerse yourself in the subject. What is behind the Internet of Things (IoT)? Which attacks are possible via Bluetooth and USB? And how can you secure the individual infrastructures in a system? This extensive book shows the answers in three parts.

TL; DR: Take a look at the book here for free

Hacking & Security: The comprehensive manual - the IT standard work was published in June 2020 in the second edition by Rheinwerk Computing. With 1.134 pages, a comprehensive volume by experts from various IT areas.

Hacking & Security - Book by authors from the IT department

The volume with a whopping 1.134 pages Hacking & Security: The comprehensive manual was reissued on June 25, 2020 at Rheinwerk Computing. Various authors have worked on the three parts “Introduction and Tools”, “Hacking and Protection” and “Cloud, Smartphones, IoT”, which are divided into a total of 21 chapters. The authors are as follows:

Technical book on IT security with the best ratings

The book Hacking & Security: The comprehensive manual effect on the Amazon product page a solid 5-star rating (as of August 6, 2020). After an introduction to hacking, security, exploits and other issues as well as terms, it provides information on Kali Linux and learning environments, hacking tools, offline hacking, WLAN, Bluetooth, USB attacks and security checks, for example. In addition, there is penetration testing, protection of Windows servers, information and usage methods of Active Directory, security with Samba and web applications, security in the cloud, mobile security, IoT protection and so on.

Headings of customer reviews on Amazon are e.g. B. "Everything you need to know is included"Or"Comprehensive tour of IT security". For example, the hands-on examples are positively highlighted in the reviews. In addition, it says in an evaluation "I particularly like the topics that cannot be found in every hacking book, such as software defined radio, wireless hacking, or attack vectors via USB devices. But of course the classics, such as internal or external penetration tests, are also represented". In addition to pure teaching text, the book offers numerous illustrations, instructions with screenshots and examples of code.