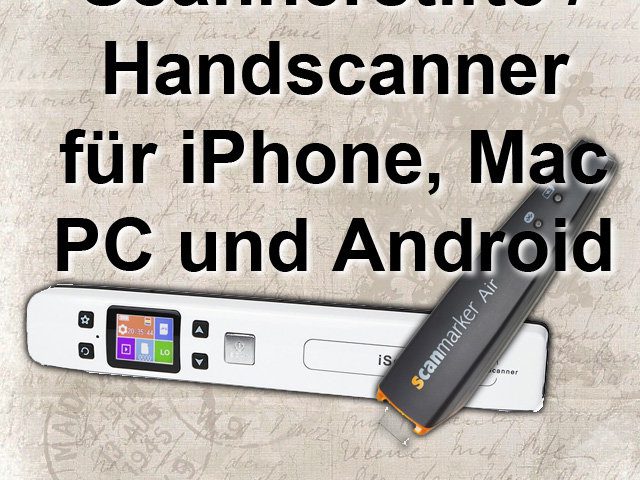 One would think that mobile technology is already so advanced in the field of hand scanners or scanner pens that it is possible to scan lines of books, magazines, recipes, photos, business cards and the like without errors. Well, there already seem to be some good and usable models - but not all are made directly for the iPhone, iPad or Apple Mac. Therefore, here is a collective article that also shows devices for Android smartphones and tablets as well as for Windows PCs. The good thing about it: some scan pens have Bluetooth or WLAN for enhanced compatibility.

Scanner pen, hand scanner, book scanner, scan pen or scan pen - as the products are also called, the correct transfer of texts takes some practice with many models.

There are many names for mobile scanners that can be used to scan lines of books, business cards, magazines, photos, and the like on the go. There are also models with multiple speech recognition and transmission functions including OCR (Optical Character Recognition). Whether it's a scan pen, scanner pen, hand scanner, scan pen or other designation, here I have picked out a few models for you that should be reasonably useful: 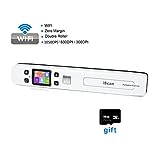 Mobile document scanner with microSD memory
Handy scanner that scans entire documents rather than line by line. The images can be transmitted via WLAN. Connectivity with PC, Apple Mac, Android smartphone / tablet, iOS on iPhone / iPad, etc. With LCD display.
Buy it at Amazon Price includes VAT, plus shipping costs (updated: 21.01.2022 at 18: 30 clock)

Scan marker with USB, without Bluetooth
Similar to the above scan pen or hand scanner, only that it only transmits via USB. Reading and digitizing of writing (43 languages), numbers and barcodes, for Windows PCs and Apple Mac / MacBook.
219,90 EUR
Buy it at Amazon Price includes VAT, plus shipping costs (updated: 21.01.2022 at 18: 30 clock)

Wizcom Quicktionary 2 - pen to translate
Scans printed text and can translate it into three languages: English, French and Spanish. Recognition of eight languages. Translation word for word. Alternative for everyone without a smartphone and corresponding Google real-time translation.
Buy it at Amazon Price includes VAT, plus shipping costs (updated: 21.01.2022 at 18: 30 clock)

Text from books, magazines, business cards and other sources can be transferred to the iPhone, Apple Mac, Android device or Windows PC with a scanner pen. The text is often recognized by OCR in such a way that it can be processed further directly. The handling of the individual devices for mobile scanning on the go usually has to be practiced. If you have a keyboard at hand and have mastered the 10-finger system, you may be faster.

But if you can't type quickly, don't have a keyboard with you, or want to have the text read out to you (coupling of scan pen, OCR and reading software for dyslexic / illiterate people, for example), you can benefit from the scanner pens, handheld scanners or mobile scanners . For people with severe visual impairment, however, such a gadget is not the right thing, I think, because you have to stay on the line for scanning.

Worth reading: The bestselling OCR software for Mac and PC

Conclusion and your opinion

Scanner pens, scan pens and hand scanners are among those niche products that have their own target group. If, with a little practice, they can master the use of the Scan Pens, then these products can definitely pay off. What do you think? Do you think that the technology will be even better or will become more obsolete with scan and translation apps? Which scan pen would you recommend / buy?