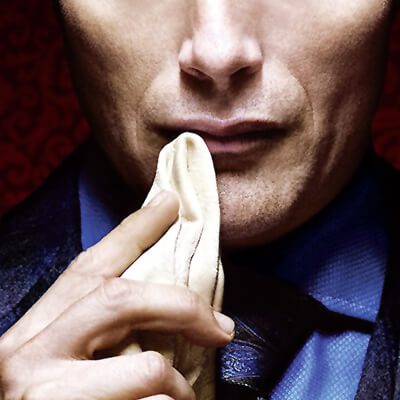 Hannibal as a TV series with Mads Mikkelsen and Hugh Dancy - the highlight so far in the portrayal of Hannibal Lecter. Here you can find all information about the books, the films and the Hannibal series.

Hannibal is not just a series for television. The story of the war-damaged psychopath who is thirsty for knowledge from surgeon to psychologist begins in the books of Thomas Harris. This researched real cases of the FBI and developed - in connection with the investigation method of profiling emerging during his work - his character Hannibal Lecter. In the end, a trilogy and a prehistory emerged around this figure; all filmed, the story about the "red dragon" even twice (see below).

The Hannibal book series by Thomas Harris is available from HEYNE in a matching design - images: Amazon

In the books, of course, characters such as Mason and Margot Verger, Will Graham, Dr. Abel Gideon, Jimmy Price and Brian Zeller as well as Dr. Bloom up. The FBI Special Agent Jack Crawford also appears in the book series - one of the main characters in the Hannibal series on US television (see below). In the movie Manhunter and in the movie Red Dragon (a remake of Manhunter) he also plays an important role alongside Will Graham. Here is the whole series of books about Dr. Hannibal Lecter in a matching design (paperbacks and bound books, selectable on the product page):

Hannibal film series: Anthony Hopkins in his most famous role

When it comes to Hannibal in the film, the best-known is probably the 1991 film “The Silence of the Lambs”. The story of Clarice Starling has not yet been picked up as a plot arc in the TV series because Bryan Fuller did not get the rights to the material. Elements from Hannibal Rising, Roter Drache (both season 3) and Hannibal could be processed. However, one also sees Dr. Frederick Chilton at the Baltimore Forensic State Hospital and Baltimore State Hospital for the Crimanally Insane. Be that as it may, Anthony Hopkins and Jodie Foster, among others, were convincing in “The Silence of the Lambs”. One of a total of five film adaptations of the book series:

DVD Trailer: Hannibal - The Silence of the Lambs

Bryan Fuller, who is also responsible for series such as Pushing Daisies and Heroes and as a screenwriter for Star Trek, has caused a sensation with the NBC television series Hannibal since 2013. With Mads Mikkelsen as Hannibal Lecter, Hugh Dancy as Will Graham, Laurence Fishburne as Jack Crawford, Lara Jean Chorostecki as Freddie Lounds and many others, he created a kind of remix or fan fiction of the Thomas Harris material from 2013 to 2015 that is second to none seeks. After the third season it was over for the time being, the interest of the fans, the ambition of Fuller and the willingness of Mikkelsen, Dancy, Fishburne and Co to continue, but sequels are on the horizon.

Picture of the back of the Hannibal DVD box as UK import - Photo: Sir-Apfelot.de / Johannes Domke

The series wasn't for the faint of heart from Season 1 to Season 3 and that started with Episode 1. Therefore, from season to season, from episode to episode, it was always a small miracle that such a series could be shown on US television. Fans were still hoping for another season or maybe even a movie in 2016, although Mads Mikkelsen thinks a movie is too short in interviews to exploit the potential of Bryan Fuller and his team of authors. Again and again there are reports that a season 4 could be brewing. Since 2017 is still young, there is still hope for this year.

The three current seasons of the Hannibal series on a total of 12 DVDs; 39 episodes and plenty of bonus material - Photo: Sir-Apfelot.de / Johannes Domke

If you want to order the individual seasons of the series with Mads Mikkelsen, Hugh Dancy, Laurence Fishburne and Co with a German audio track, you can do so on Amazon. Here are the individual product pages from season 1 to season 3:

Much cooler is of course the Hannibal DVD or Blu-Ray box in an elegant design:

Here you can order the Hannibal series from TV as a Blu-Ray or DVD box with season 1, season 2 and season 3 as well as additional material as a UK import and only in the original sound:

Trailer of the Hannibal TV series

There is corresponding literature on the books by Thomas Harris as well as on the Hannibal series by Bryan Fuller and on the films. However, I find the two books the most interesting The Art and Making of Hannibal: The Television Series and Hannibal syndrome: serial murder as a phenomenon.

Conclusion on the Hannibal series / the Lecter series

Whether and why one can and may be a fan of such a series of stories about a psychopath can be debated for days. In the end, it is probably the presentation that is used in the books, in the films as well as in the Hannibal series by Bryan Fuller with Mads Mikkelsen in the role of Dr. Hannibal Lecter, takes on the attractive part. Above all, the NBC series is full of allusions, puzzles, FBI entanglements, psychological games and, moreover, optical and acoustic (musical) stimuli that it is almost a pleasure. Therefore it is also clear why all fans are waiting for a new season of Hannibal over 2016 and now also in 2017. However, it is according to TVLine and Hugh Dancy it is possible that the series will not come back for four or five years ...