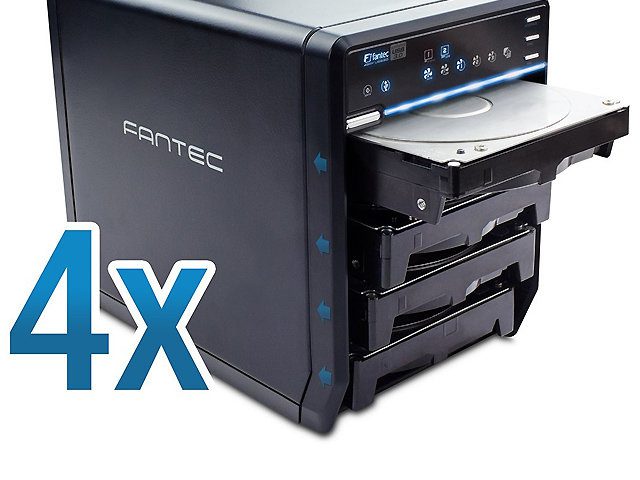 If you want to set up a RAID, NAS or a "JBOD" (explanation below!) On your Apple Mac or Windows PC, you not only need several hard drives, but also a hard drive housing. I would like to introduce you to a fast hard drive dock for up to four 3,5 inch HDD platters with eSATA connection and USB 3.0 connectivity. It is from Fantec and comes with an individual LED display and an 80 x 80 mm fan in addition to the slots. At just under 100 euros, the Fantec box is not too expensive either.

The Fantec hard drive housing for up to 4 x HDD hard drives. You can order the device in elegant black and with its own fan empty or with four 3,5 inch plates.

Fantec's ventilated housing is compact and made of aluminum. Up to four 3,5 inch plates can be stowed in it and individually selected. Of 119 reviews on Amazon, 58 are 5-star and 30 are 4-star. In addition to the empty case from Fantec, you can also choose sets with cases and hard drives of 1TB, 2TB, 3TB or 4TB each on the Amazon product page.

Whether an HDD hard drive or up to four of them, this case from Fantec seems to be worthwhile. For the sake of clarity, I have summarized the technical data for you:

Build RAID, NAS or JBOD with the USB housing

If an external hard drive is not enough for you and you want to hang up to four of them on your PC, Apple Mac, iMac or MacBook, then you only need a USB port thanks to the Fantec box. So you create a RAID quickly and easily (Redundant Array of Independent Disks). You can also plug the case into a WiFi router via USB to connect a NAS (Network Attached Storage), which you can access wirelessly with multiple devices.

Current WLAN routers for DSL and cable would be z. B. this:

However, my desired function for the hard disk dock would be a "JBOD", which is the abbreviation for "just a bunch of discs" and means something like: "Just a bunch of hard disks...". So no redundancy, but the full capacity and every single hard disk appears in the Finder independently - although all four are only connected with a USB cable.

The individual options are ideal for backing up, storing media files such as photos, videos and films at home, as well as for the office and other areas of application. As an accessory for the workplace and with the appropriate accessories such as a WLAN router including a USB connection, the Fantec hard drive housing is also something for those who work creatively who want to back up their photos, videos, drawings and project files.

More information about the device

The compact Fantec housing in black seems to be the ideal solution to use only one USB connection for four hard drives or to derive other advantages from it, according to the numerous very good and good reviews on Amazon. Some users complain about bugs or malfunctions that a reviewer explains in detail. He goes into the fact that the errors and malfunctions do not emanate directly from the hard drive housing. You can do the explanations read here.

Interesting articles on the topic

Do you operate a hard drive or several hard drives externally - and do you rely on HDD or SSD? Do you prefer 3,5 inch disks or storage with space-saving 2,5 inch? Have you perhaps already had experience with the Fantec hard drive enclosure? Feel free to leave your opinions and experiences as a comment!