Have you tried turning it off and on again?

Solving technical problems - especially in larger companies, but also in the family or among friends - is often the task of a suitably capable person. In addition to all the knowledge and possible skills, two other things also prove to be useful for just those: the targeted use of Google and the first step of every support, which consists of switching the device in question off and on. The often quoted English saying emerges from the latter Have you tried turning it off and on again? - Not least with the British sitcom "The IT Crowd", which I am currently watching again, the saying has become part of pop culture.

Have you tried turning it off and on again? - A saying that leads to problem solving not only in The IT Crowd. Here is a little homage to the standard statement from technology helpers;)

Not a relic of old technology: switching off and on is the solution

I'm watching the series again The IT Crowd (Wiki) and find the standard saying of the IT nerds depicted in it “Have you tried turning it off and on again?” simply good. Above all: The procedure described works just as well today with the Apple iPhone, iPad and Mac as it did with the first Windows boxes. Even with Internet routers, the first thing you should do in the event of a problem is to pull out the power plug for ten seconds and then restart the router ...

A current case goes with this: A friend called because his son couldn't get into the WLAN with his iPad. A message was displayed that the connection was not possible, and the way it was phrased reminded me a lot of the "Screen Time" feature of iOS. However, no restriction was made in the screen settings. Everything looked good in the WiFi settings too. Since I couldn't think of anything else, I said you should completely restart the iPad. And what can I say: it worked. Internet access was possible after the restart: D

IT equipment: Have you tried turning it off and on again?

If you work in the IT department of your company and / or are repeatedly asked by your family about problems with your computer, smartphone and maybe even microwave, simply use the iconic slogan to convey your displeasure. Whether T-shirt, mug, sweater or even gym bag (as if nerds were doing sports) - among other things on Amazon you will find numerous allusions to the simplest of all IT problem solutions;) 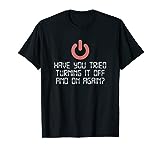