HDMI ARC - what is it and what can it do?

HDMI ARC Although it is not a new technology standard, it is still uncharted territory for many. With the use of HDMI-ARC cables in the home theater, other cables can be saved and new advantages can be used. The abbreviation stands for Audio Return Channel and means exactly what it sounds like: the transmitted audio signal is sent back via the same cable or another HDMI connection. So do you have the DVD or Blu-Ray player, the PlayStation or Nintendo Switch or another video source connected to the AV receiver and connected to the TV, you don't have to run an extra audio-out cable (S or PDIF) from the TV to the receiver - at least if the devices and cables are designed for the return of the audio signal .

HDMI ARC - What is it and what can it do? Information on the audio return channel and the coupling of TV and AV receiver can be found here - as well as cables and tips on HDMI CEC from Sony, Philips, Sharp and Samsung.

What can HDMI ARC do?

HDMI ARC is there not only to route video and audio to the television, but also to route the audio back via the HDMI cable. This can work in the same way with a chain from source -> AV receiver -> television, as well as with the direct connection of the source to the television and its connection to the AV receiver. The latter then forwards the audio supplied via HDMI ARC to the sound system. The point behind it: extra audio-out cables can be saved. At least this should be the function for most audio formats, as not all are supported. In addition, the support and functionality of the technology always depends on the combination of devices and brands.

Here is an overview of the supported audio formats when using HDMI-ARC:

This is how the HDMI audio return channel works properly

HDMI ARC only works if the two main devices - the TV set and the AV receiver - are not only connected with the appropriate cable, but also support the function. If necessary, the cable must be plugged into the slot specially marked “HDMI ARC” so that the structure works. The best way to find out whether your devices offer you the option for audio feedback and which installations / settings are necessary for this is in the respective operating instructions - a general statement cannot be made here. If your instruction manual went wrong, these steps in the settings of the devices from Sony, Philips, Samsung, Sharp and Co. could help you:

A probable case that can occur, especially when using standard cables that are enclosed with the devices, is the lack of support for the audio return channel. Then you have to buy a cable that supports HDMI ARC. These HDMI ARC cables do not have any disadvantages with regard to the supported high-definition images, but can depending on the model 4K UHD, 3D video, HDR as well as HDR +, Dolby Vision and the like. For example, there are two well-known products that have been bought a thousand times on Amazon and rated well to very well this Ultra HDTV cablethat is a little more expensive, or this cheaper KabelDirekt cable with similar characteristics. Full high definition as well as ultra high definition with high frame rates are possible in every price range. 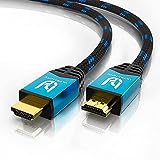 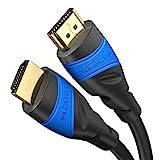