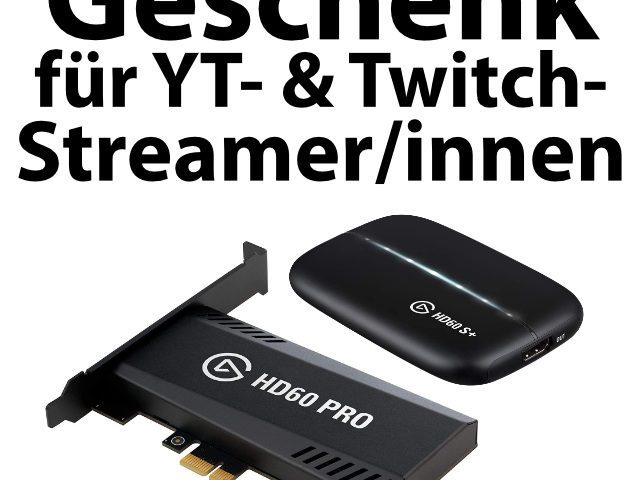 Looking for a Christmas present for a YouTube or Twitch streamer? Then a Capture Card for the PC can be the right surprise! Because it allows HDMI signals from Xbox, PlayStation, Nintendo Switch, Blu-Ray players, MacBook and Co. to be transmitted and streamed directly to the PC. Recordings for YouTube videos or your own website are also possible. Whether it's gameplay, tutorials, glitch captures, or streaming Jackbox Party to play with the community - with a HDMI Capture Card makes it all possible.

A game capture card for Twitch streamers or gamers who make YouTube videos can be a great Christmas present. Here you will find different models for USB and PCIe.

If you want to go live with a game on Twitch or YouTube, you are spoiled for choice: Should the HDMI signal be fed into the computer via USB? Or should a card be installed in the PC that the video signal via a PCIeConnection transmits? The latter of course has the advantage that you don't have to pay attention to USB 3.0 or USB 3.1.

In addition, lower latency is to be expected. In addition, there is no USB device attached to the computer that requires space. A capture card with PCIe connection is installed directly in the housing and connected to the motherboard there. When buying, it must be clear which connection options the PC offers and which should be used.

If you look around at YouTubers and streamers, you will mainly come across transmission solutions from Elgato in their technical equipment. Elgato is an internationally recognized brand for gaming matters, which has also been mentioned several times here in the blog - on the subject Green Screen, Light as well as Camera streaming on PC and Mac. The Elgato solutions also offer their own software with which the game stream can be optimized. This is an important point, especially for beginners who don't want to experiment too much with OBS.

Here are the current offers that you can buy and give away for Christmas 2020:

AverMedia is also a manufacturer that offers various solutions for recording and streaming HDMI signals from video game consoles or other multimedia devices. On this product page from Amazon there are five different devices to choose from, each offering different options. Mostly they provide a pass-through for 4K60 signals, but only offer the option of storing or streaming 1080p60 content. But that doesn't have to be a disadvantage, as streams beyond Full HD are not that common anyway. The 4K playback on site is more important and is made possible with the devices.

Cheap solutions from other manufacturers

Are you looking for a way to convert HDMI content from Xbox, PlayStation, Nintendo Switch and Co. into video or stream solutions - but at a lower price? Then there are also other capture cards from manufacturers that are not called Elgato or AverMedia. Their hardware also has good to very good ratings. However, you should always look at the customer reviews before buying to discover possible weaknesses.

Here are a few external alternatives to the above models: