iPhone, headphones and driving - prohibited or not? 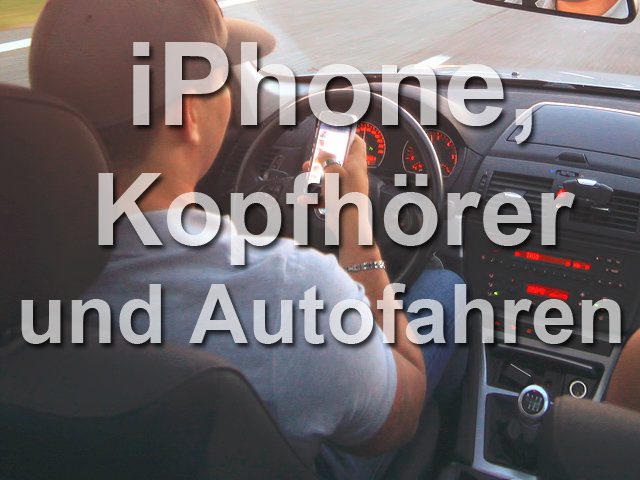 Using the iPhone or headphones such as the Apple AirPods while driving - is that forbidden per se, or are there exceptions? I want to get to the bottom of this question with the following considerations. Because in the car, on the bike and elsewhere, one would like to listen to music and remain available for contacts. According to the German Road Traffic Regulations (StVO) this is actually not a problem - if the distraction is not too great or if your concentration suffers ...

iPhone, AirPods or other headphones while driving a car, on a moped or bike? That doesn't have to be forbidden per se!

As always, with such a topic here in the blog, the note that the corresponding post is not intended to be or replace official legal advice. The information given is provided to the best of our knowledge and belief and after careful research. So if you are looking for help in a legal dispute, please contact a lawyer. From experience I can say that this brings a lot!

§23 StVO - Other obligations of vehicle drivers

In §23 paragraph 1, sentence 1 of the road traffic regulations: “Who drives a vehicle is responsible for ensuring that his vision and the hearing not by the occupation, animals, the cargo, devices or the condition of the vehicle. ”- In paragraph 1a, it is also pointed out that a mobile phone must not be used while driving or with the engine running if it has to be held in the hand. ( )

Use your iPhone in the car: With a hands-free system

If you want to use the iPhone or another smartphone in the car, you can do so while driving or with the engine running. However, only if the device does not draw your attention too much and if you have both hands free. Car mounts for the iPhone are available from, for example Quad lock or TaoTronics. With Siri, you can even make calls, plan appointments, check your emails and much more - without taking your hands off the steering wheel or your eyes off the road.

Using AirPods in the car: no problem in general

If you have both AirPods in your ears and are listening to music so loud that you can no longer hear the traffic and other noises surrounding you, then you are doing something wrong. According to the road traffic regulations. But if you have one or two AirPods in your ears as a prophylactic, so that you can answer calls or better understand the navigation system when giving instructions, then that could still be okay. Especially if it's the Apple earbuds only as a headset used, there are actually no problems.

Headphones on the bike

Many pedestrians listen to music through headphones and thus actively exclude their surroundings. Actually, they are also participants in road traffic, for example when they cross the street or share their route with cyclists. But nobody says anything with pedestrians. It's different with cyclists - logical, in an accident more can happen. Listening to music on a bike is not forbidden per se, writes the time in hers Blog. "But the prerequisite is that you can continue to notice the traffic and hear warning signals such as bells and horns," quoted Die Zeit a knowledgeable lawyer.

An important factor on the road: concentration

In addition to all the rules, regulations and technical aids that help ensure that iPhone and Co. can also be used while driving by car, motorcycle, moped, bicycle and so on, there are other important factors. Because a phone call or listening to the sat nav demand your concentration. You miss every bit of attention that the interlocutor, the instructions for Siri or "if possible, please turn around" are missing in traffic. Dangerous noises are perceived with a delay, optical stimuli are not implemented as quickly - ergo: the reaction time is extended.

Hands-free, Siri and AirPods - how do you keep it?

How do you feel about smartphones, headphones and similar technical gadgets in the car? What do you use and how? And how do you make sure that you still pay enough attention to the road? Feel free to leave your experiences and opinions as comments!