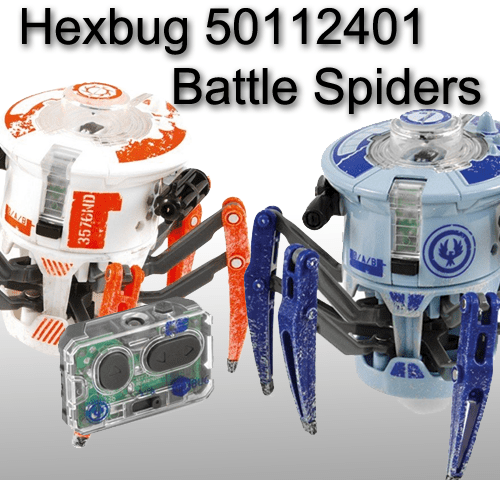 Spider robots for Christmas may not please everyone, but technology freaks and friends of robot battles can use the Battle Spider devices from hexbug skip properly. The visually appealing Battle Spider robot can be operated by remote control and can compete against each other. In the following I want to introduce you to a double pack that comes complete with remote controls and batteries. Maybe it's something for yours too Christmas wish list ;)

The almost 18 cm tall robots, which are designed as amusing arachnids, have a futuristic look and stand out from each other through their color scheme. The same applies to the respective remote controls, which cannot be confused with the orange and blue labeling. The "fight" that the two robots can carry out is realized using light signals ("laser"). A massacre like them BattleBots one shouldn't expect, however.

The how it on Amazon called, "fighting sci-fi robots“Bring consistently good ratings on the side of the largest internet mail order company. The price, which is currently around 50 euros, is justified and entirely appropriate to the good quality of the toy. In addition, the fun of the game also results from the concentration in combat mode. Hits are only registered if the target is properly aimed - that trains the eye and the dexterity!

Small point of criticism: batteries and their runtime

The 4-star ratings on Amazon indicate that the Battle Spider robots from Hexbug would actually have deserved 5 stars if it weren't for the "ridiculous button cells". An integrated set as well as one for replacement are already included in the set, but with intensive use, the replacement batteries can also be gambled down relatively quickly. It is not for nothing that Amazon thinks that this article is often ordered with a pack of 20 button cells (LR44) ...

The two robots with their remote controls. The only downside to this toy, according to the reviews, lies in the batteries; Image source: Amazon

One reviewer solved the problem in his own way and switched the power supply to LiPo batteries. After a bit of tinkering, the Hexbug Battle Spider Bots now run longer and more persistently (voltage drop is not so noticeable). If you are also interested in the Battle Spider Twin Pack and want to modify the power supply, then unfortunately you have to click afterwards Guarantee and warranty dispense. But there doesn't seem to be any other defects than the batteries. Therefore: good luck!

By the way: Instead of letting the devices compete against each other in the open, you can also build obstacles and hiding places to make the battle more interesting - as shown here by Eva and Frank:

Conclusion on the robots for Christmas

As a little present in between they are Battle Spider robot from Hexbug maybe a little too expensive. At Christmas, which will soon be inevitable, children interested in technology and adult play children should be happy about it. Then the price should also be justified. What do you think of this toy? Cool or not?