Surely everyone knows the problem: After a few hours of working on the Mac with various programs, more and more windows "garbage" the desktop, so that after a while you completely lose the overview and only go to the desired program with CMD + TAB or via the dock comes. Some people help themselves with that too Keyboard shortcuts CMD + M and minimize apps manually or use the abbreviation CMD + H to "hide" certain apps manually. All laborious manual work that you still have to think about. Nothing for me ... in contrast to the beautiful app I recently got to know!

Hocus Focus - The replacement for Houdini or Spirited Away

The Mac app "Houdini" saw the light of day back in 2011. In the background she always made sure that windows of apps were hidden that were not used for X seconds. Unfortunately, Houdini - just like the alternative "Spirited Away" - was no longer developed and so the programmer Nial Giacomelli got down to it and programmed the software from scratch to make it look Yosemite-ready. You can see the result on http://hocusfoc.us download it for free. But I would ask you to make a small donation to the programmer if you use the app over the long term. 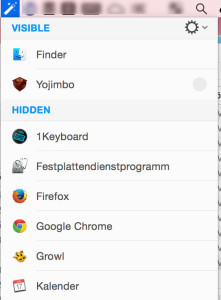 Via the menu bar you can see which apps are visible / hidden and you can set the time for each app.

I have been using Hocus Pocus for a while now and I think the principle is as simple as it is ingenious. The app can be found in the menu bar behind a magic wand. There you can either call up the settings and create various profiles there. In each profile you can set a "default time" after which Mac programs will automatically hide if the time is exceeded. If you have programs that should be shown longer or shorter, you can adjust the time for these individually using the icon in the menu bar. If you want to completely prevent the hiding of a Mac app, then you pull the time with the slider to "0".

In the settings there is an option called "Hide apps when focus is lost by default". If you have ticked this box, then all other programs and their windows are automatically hidden if, for example, a new program is started or you go through the program list with CMD + Tab. That was a bit too much of a good thing for me, so I deactivated it. I often switch between text editor and Browser and would like to see both.

The developer has decided to no longer offer the app via the app store. He cites the possible rejections due to the functionality of his software as the reason for this. Apple wants the apps to run in a sandbox as far as possible and not have access to other apps. If the programmer were to take this as a basis, his little app would no longer be able to perform the actual function and would be correspondingly pointless. So if you want to get the software as a download, go directly via the developer's website.