HomeKit socket: Control and monitoring of power sources in the smart home 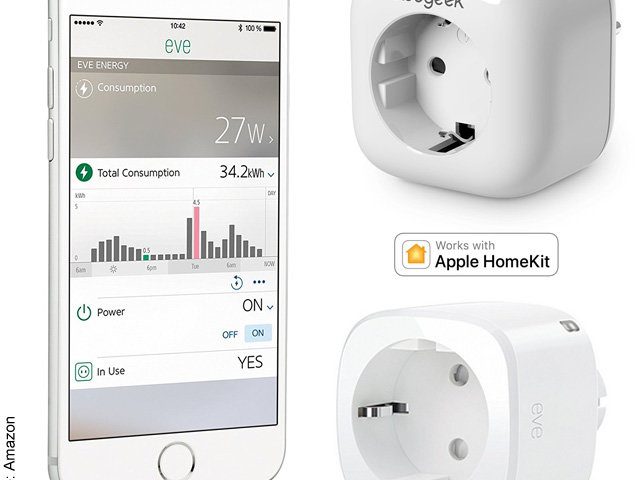 In the smart home, electrical devices and systems in particular should be able to be controlled and monitored using smartphones, tablets, voice control and the like. With a HomeKit socket, you can also integrate devices that are not intended for the Internet of Things (IoT) or are simply old into your Apple Smart Home. Via WiFi, Bluetooth and a suitable app or the HomeKit application on the iPhone or iPad, you can switch on a HomeKit socket, switch it off, monitor its consumption and much more.

When looking for a HomeKit socket, you come across Koogeek and Elgato Eve. They can be controlled via WLAN or Bluetooth, power consumption can be monitored, and much more.

You simply integrate this adapter for the socket via WLAN into your Smart Home equipped with Apple HomeKit and you can then control it with the HomeKit app, an app that accesses it or via Siri. For example, if you have the radio that always plays when you fall asleep connected to the mains with this HomeKit socket, you can tell Siri to cut the power supply while half asleep - and the radio will go off.

Another example of using the Koogeek HomeKit socket: closes by Distribution strip your home theater and supply it with power via Siri command or switch it off with the Apple voice assistant. You can also use the Koogeek XMG9097076232422XA (Item number) monitor power consumption, set schedules (lighting of the aquarium, radio activity, making coffee in the morning, etc.) and select other features.

We don't have our own test here on the blog yet. Reviews, opinions and experiences of customers who have already tested the Koogeek socket can be found on the linked product page.

The Elgato Eve Energy (not to be confused with the previous model) brings Apple HomeKit support and compatibility via Bluetooth. So if you want to access the HomeKit socket via Bluetooth rather than 2,4 GHz WLAN and view the power consumption, then this is the model 1EE308307002 from Elgato is the right thing for you. 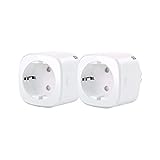 2 x Elgato Eve Energy wireless current sensors and switches
Here the Elgato Eve HomeKit socket in a double pack for € 99,90 (as of July 2017). You can also find individual Elgato Eve socket adapters on the Amazon product page. With the Elgato Eve app, you can view power consumption, usage times and similar values, as well as activate and deactivate the socket.
Buy it at Amazon Price includes VAT, plus shipping costs (updated: 4.12.2021 at 18: 10 clock)

Using the location service / proximity detection via Bluetooth, you can also use the Elgato Eve app for the iPhone or iPad to switch off the HomeKit socket when you leave the house and to switch it on when you return home. This should also be possible with the Apple Smart Home extension in one or two special steps. As with the Koogeek model, it can be controlled via iPhone, iPad, iPod and Apple TV.

Here, too, we cannot (yet) deliver our own test. You can find test reports and honest opinions on the product on the linked Amazon page - for both the single device and the cheaper double pack.

Smart sockets for use with Echo, Echo Dot and Alexa

Perhaps you are not (yet) on the move with Apple products and the HomeKit function for your smart home. Or you are simply fans of the Alexa voice assistant from Amazon, which comes to your home via Echo or Echo Dot device. If so, then here is a list of the first five bestsellers in the field of smart sockets for use with Alexa and Echo (Dot) for you:

Questions, answers, customer reviews and experiences with the smart socket adapters resulting from one or the other test can be found on the Amazon pages of the products.

Amazon Alexa, HomeKit and Siri or your own app?

Do you use devices and adapters for the smart home and if so, which features have you already installed / integrated? Do you rely on the apps offered by the manufacturers Koogeek, Elgato and Co. or do you prefer systems like Siri, Alexa and Google Now? Feel free to leave your opinion and experience as a comment! ;)