The Apple HomePod mini can be used as a smart speaker, intercom, sound system and auditory extension of the iPhone. But what can you do if it doesn't really want to blend in with the surfaces of your house or apartment? Of course, screw it to the wall! If you are looking for a HomePod mini wall mount looking, then take a look at the following suggestions. Some come in a double pack so that you have the right accessories for a stereo setup on the Apple TV.

Are you looking for a HomePod mini wall mount with or without screws? Here you will find brackets for the Apple Smart Speaker in various designs - in black or white as well as individually or in a pack of 2.

Many holders for smart speakers are not only designed for the Apple HomePod mini, but can also be used for Echo devices from Amazon. For example Delidigi's model. You can get this individually or in a 2-pack as well as optionally in black or white. Not only can the Bluetooth speaker be placed on it, there is also smart cable management. 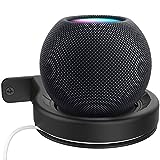 But what about the HomePod mini wall mount without screws? If you don't want to drill holes in the wall, install wall plugs and always use the loudspeaker elsewhere, then have a look at them Bracket from Molitececool at. This uses the HomePod mini power supply unit as a suspension and can be used individually at sockets. The cable routing was also taken into account. 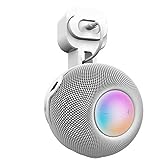 The provider LUOGAO follows the same principle with its HomePod mini wall mount without screws. However, you can do this in addition to individual brackets also buy packs of 2, optionally in black or white. The construction hangs on the plug of the Bluetooth speaker from Apple, the cable management can be implemented on the back and the speaker is clamped on the front. That looks pretty neat. 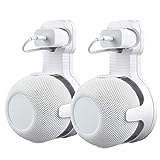 If you want a more subtle design, there are also offers for this. It is available in black or white, single and double, and optionally with a HomePod mini cover for extended protection Offerings from Baomaeyea. Unlike the models above, these brackets are not so noticeable and are not made of plastic, but of metal. There is a cable feed-through, but no cable management devices.

Also subtle, but made of acrylic and, in addition to the Apple loudspeaker, is also offered directly for the Amazon Echo Dot 3 and 4 Bracket from SPORTLINK. It also has a cutout for the cable so that it can be attached directly to a socket. Note on the current price: it is cheaper to buy two individual products than a 2-pack (for whatever reason). 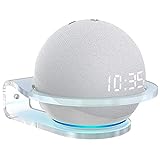 SPORTLINK Wall Mount Stand for Dot (4th Generation) ＆ Homepod Mini, Robust clear acrylic ...
10,99 EUR
Buy it at Amazon Price includes VAT, plus shipping costs (updated: 24.01.2022 at 13: 54 clock)
-
Do you like my blog? Then I would be happy to receive a short review on Google. Easy leave something here for a moment - that would be great, thank you!