Hockey as an iOS app: The best 5 ice hockey games for iPhone and iPad 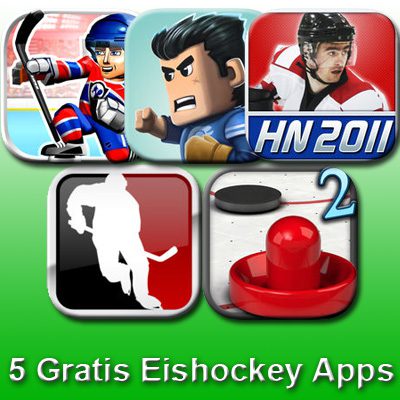 In addition to many practical and useful iOS apps, there are also a number of games for entertaining entertainment; not only Soccer games, but also hockey and ice hockey games for iPhone and iPad. I did a little research and picked out five good and very good rated ice hockey games for iOS. You can now indulge in the icy puck sport on the beach in the coming spring as well as in summer. The last app is a bit out of the ordinary, but provides variety.

Three of the five hockey and ice hockey games for iPhone and iPad listed here as screenshots.

With the name "icebreaker" the game must Icebreaker hockey are of course at the beginning of this list;) But otherwise it is also predestined for it: good graphics, exciting moves on the virtual ice, and ever increasing challenges in a total of 50 levels are worth mentioning. "Make your way to the gate with deception maneuvers. Skate past those who only want one thing - stop you.“, It says in the app description.
Download Icebreaker Hockey here

You can select a total of 18 national teams (including Germany, Austria and Switzerland) as well as 40 customizable city teams in this game for the iPhone and iPad. There is even the option of dueling in multiplayer mode via WiFi and Bluetooth. Even if the year is in the name Hockey Nations 2011 Pro A few moons ago, it is still one of the coolest graphically of the ice hockey games for iPhone and iPad.
Details and download for iOS

The Ice rage it's not about building a team out of the ground or leading a national team to victory. The little arcade game with at least 3D graphics and 60 fps gives you the opportunity to compete against the CPU or a friend. Everyone has a player and a goalkeeper on the field. Special characters like Santa Claus loosen up the game even more. Fun thing!
Watch Ice Rage on iTunes

The Big Win Hockey put your own team together individually and then build it up using cards. Your team's skills are also based on these cards. Skills and strategy are then tested in a match against teams from other users - worldwide. But playing yourself is not really possible. You can watch and help with the "Boost" ... but if you prefer to control a player yourself and fire the puck into the goal, you should download the app mentioned above;)
Big Win Hockey details and download

Touch Hockey 2: table hockey according to your taste

Strategies, teams and games against clever opponents - if you need a break from that, the game can be yours Touch Hockey 2 help. Admittedly, it is not a new app that has not been updated for a long time, but a game that has been rated quite well by experts for in between. Just play table hockey, make the game tables and rooms cool and have fun. A good change.
Details and alternatives on iTunes

There are tons of ice hockey games for iPhone and iPad, not just the ones mentioned. But I noticed these five positively. If you follow the links given, you will also find some alternatives by default under the app description. This opens up many other interesting games, some of them good, some not that well rated. But for various reasons and expectations. In short: it's always worth browsing.