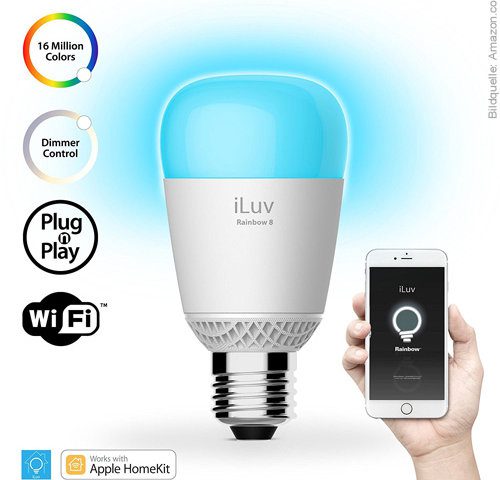 The iLuv Rainbow 8 LED lightbulb is a light source for E27 sockets that was presented in the middle of the month and, with 800 lumens, has about the power of a 60 watt lightbulb - but with WLAN integration, compatibility with the Apple HomeKit and 16 million colors. You can illuminate your smart home individually using the HomeKit application from Apple, i.e. with the Home App, as well as with the iLuv App. Automatic switching on and off according to a set schedule is also possible.

This LED bulb from iLuv is not yet available in Germany. In the US, however, you can already get them on Amazon as well at iLuv itself order for $ 49,99 each. According to the manufacturer, the life or cumulative lighting time of the iLuv Rainbow 8 should be 20.000 hours; that's around 2,28 years. So if you use it about 5 hours a day, it will probably last 10 to 11 years. The control happens without a hub, i.e. without additional hardware. Basically you only need the iLuv Rainbow 8, the Rainbow App from iLuv or the Home App from Apple and WLAN. Then you can use light in 16 million color gradations and individually dimmed. Several lamps can be combined and set up accordingly.

HomeKit is Apple's answer to the question What actually is Smart Home? With the Home App from Apple, compatible devices such as the LED light bulb presented or the one recently described here in the blog E14 LED bulb from Philips Hue being controlled. In addition to light, there are also many other components in a smart home that can be controlled via smartphone, tablet and hubs: sockets, thermostats, windows and shutters, air conditioning and fans, sensors, locks and security systems, cameras and much more. You can find information about the HomeKit in Support area of ​​the Apple site.

Do you already use the Smart Home solution for iOS on iPhone and iPad? Or do you turn your light on and off at the switch? ;)