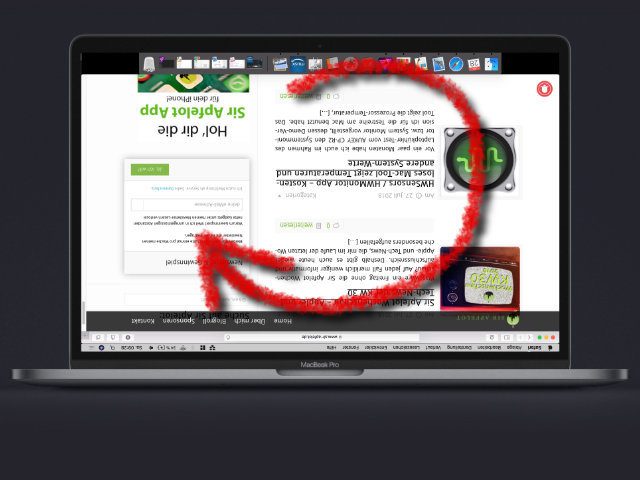 For external displays and monitors, there is the option of rotating the display under macOS on Apple Mac, iMac and MacBook in order to display it on the rotated monitor. This is useful if you z. For example, rummaging through texts every day, designing magazine pages or looking at large-format portrait photos - then it is worth setting up the monitor lengthways and rotating the ad. For the fixed displays of the iMac and MacBook, the function to rotate the screen and rotate the display is not intended directly. How you can still rotate the picture by 90 °, 180 ° or 270 °, I'll show you here.

Tip: Please note the problem-solving tips for each manual.

Rotate the iMac and MacBook screen or rotate the display: Here I show you two options.

This is how you can rotate the iMac and MacBook display

Admittedly, there aren't many occasions when you can and should change the display of macOS, apps and menus on the iMac or MacBook from landscape to portrait - or turn them upside down. Because the hardware cannot be turned so easily and set up safely and sustainably for the components. However, I started looking for options because I wanted to read eBooks on the MacBook Pro while lying on the couch or in bed. So after a short research, pure laziness led me to two solutions:

There are one or two older apps on the Internet that can be rotated to the screen or downloaded on the iMac or MacBook. However, the otherwise hidden function can also be tickled out of the Apple system using a key combination. To do this, proceed as follows (note the instructions after the list): 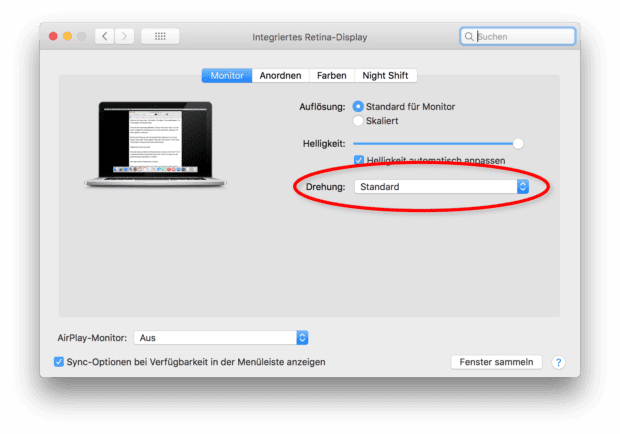 Tips for solving problems with this procedure

When I used the above instructions for rotating the MacBook screen, the first problem arose: the screen went black and there was no trace of the mouse pointer. If this happens, there are two ways to solve the problem: either switch the device off with the power button and then on again - or connect an external monitor. I did the latter (on the 2012 MacBook Pro with a Thunderbolt to HDMI cable), which resulted in the Apple laptop's display showing something again. And that was actually the picture rotated by 90 degrees.

Another little tip: after a restart or after switching the computer off and then on again, the display is still rotated. On the macOS loading screen, the image jumps and registration and use are only possible depending on the selected degree of rotation. In the system itself, however, you can turn the display back using the steps mentioned above.

As mentioned above, there are also little helpers in software form that have been programmed by developers to rotate the screen display under macOS. One of those apps is Display Rotation Menu by Mage Software (Download here). The 82 kb small app sits as a symbol in the menu bar after opening and offers the following options for the internal display and connected monitors (also note the information here): 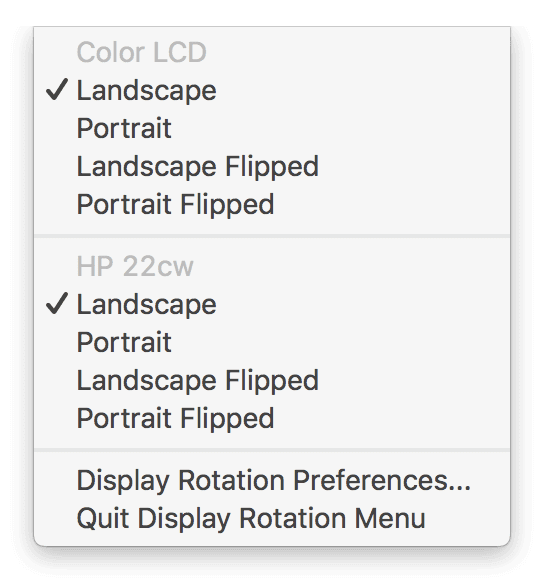 Recommended reading: Why you should only download non-App Store apps from the developer

Advice and help with this procedure

The app Display Rotation Menu to rotate the display on iMac and MacBook is not available in the App Store, but has to be downloaded from the developer's website. Therefore, when the downloaded file is called up, the system could get stuck because the app is not considered to be trustworthy. To run it anyway, click on the in the menu bar Apple menu (), then on System settings ... and then on Safety. General-Rider should now be able to see the note on the Display Rotation Menu app. Click on Open anyway, then everything works as intended. 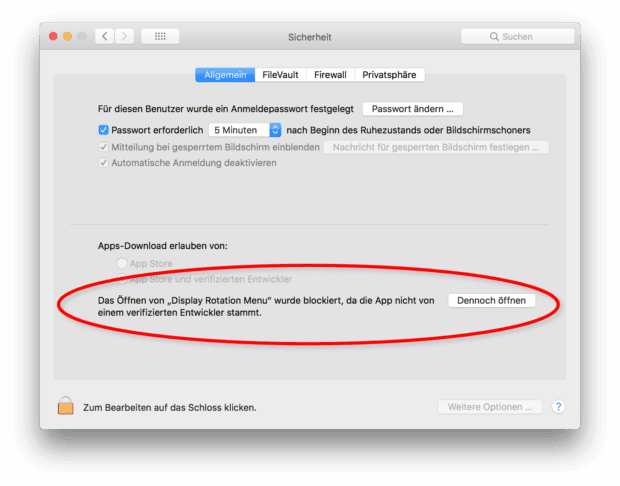 An important note at the end: Even when using the app, the iMac and MacBook screen / rotate display can end up with the screen simply going black. In addition to connecting an external display / monitor, there is a much better solution than a hard reset: the key combination cmd + alt +ctrl + 0. The combination of command, option, control and zero (alternative names) brings you back to the normal "landscape" view from every selected rotation of the display. 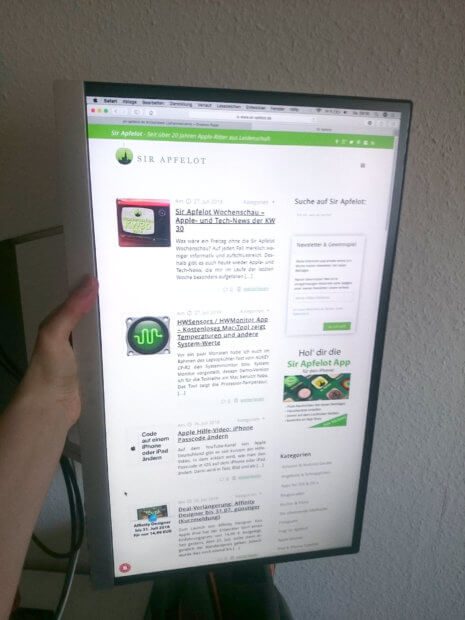 Monitor as a newspaper replacement? This is only good in the long run if it is fixed or mounted: D

Conclusion on the iMac and MacBook screen rotate / rotate display

If you also want to rotate the display of the permanently installed displays in the Apple computers of your choice under macOS, then you now have two solutions. The first requires a monitor or a hard reset for troubleshooting. The solution to the problem with the second solution is simply pressing four buttons at the same time, which is much easier. Whatever you do - now you can be lazy on your MacBook and read eBooks (or watch films) lying on your side: D