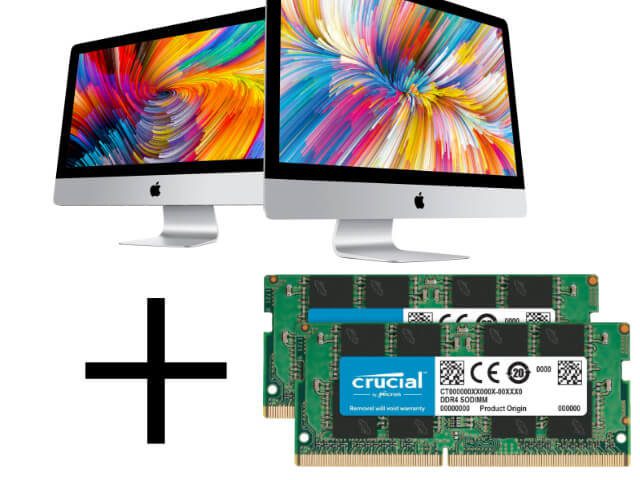 A reader recently asked me which Apple iMac I would currently recommend to buy. My recommendation is the Apple iMac 5K with Retina display and Fusion Drive from 2017. However, most retailers only find this in the version with 8 GB RAM, which I personally think is too little memory. You can of course also buy it directly from Apple and order the version with 16, 32 or 64 GB of RAM. But the latter costs 1.680 euros more. Then upgrade yourself! How and by what means, I'll show you in these instructions - you can also find a video with step-by-step explanation here;)

Upgrade the iMac Retina 5K 2017 memory (RAM) and create up to 64 GB of RAM. Here are the step-by-step instructions and a video from YouTube.

Which RAM bar can I use?

Before you start tampering with the hardware of the Apple iMac, you have to know which RAM bars you can install. It is important to know that there are 4 slots that are factory-equipped with at least 8 GB (2 x 4 GB bars). If you want the maximum RAM of 64 GB RAM, then use 4 x 16 GB bars. These not only have to be SO-DIMMs (Small Outline Dual Inline Memory Modules), they also have to meet these criteria:

The individual steps for upgrading memory on the 27-inch Apple iMac from 2017 are super-easy. Anyone who is not exclusively gross motor predisposed and has a bit of instinct will definitely manage it. The only tool - besides the hands - is a slotted screwdriver or other flat tool to press a button. Furthermore, nothing has to be screwed on or otherwise disassembled.

So if you have checked your (new) Apple computer for functionality and it works as it should, then the new memory bar can be installed. Proceed as follows:

Here you can find the points outlined above again as a video. The YouTube video from user Oli shows how to remove the power cord, open the flap, remove and insert the RAM bars and reassemble everything.