In the Shadow of the Moon: new time travel thriller on Netflix

Time travel films fascinate me again and again. "In the Shadow of the Moon" is currently causing knots in the brain on Netflix, because - so much can be revealed - it's not just about leaps in time, but also about the direction in which time is running. You can find an English trailer for the film here on Youtube and the full movie here at Netflix.

A brief glimpse into the plot ...

I don't want to spoil now, that's why there is only a short version of the initial plot here: The police officer Thomas Lockhart is an avid copy of a patrol officer and hangs himself in a series of murders in which the victims die of bleeding from ears, eyes and mouth. The suspect is quickly found with the help of videos. However, the persecution kills her and the case is closed for the time being. 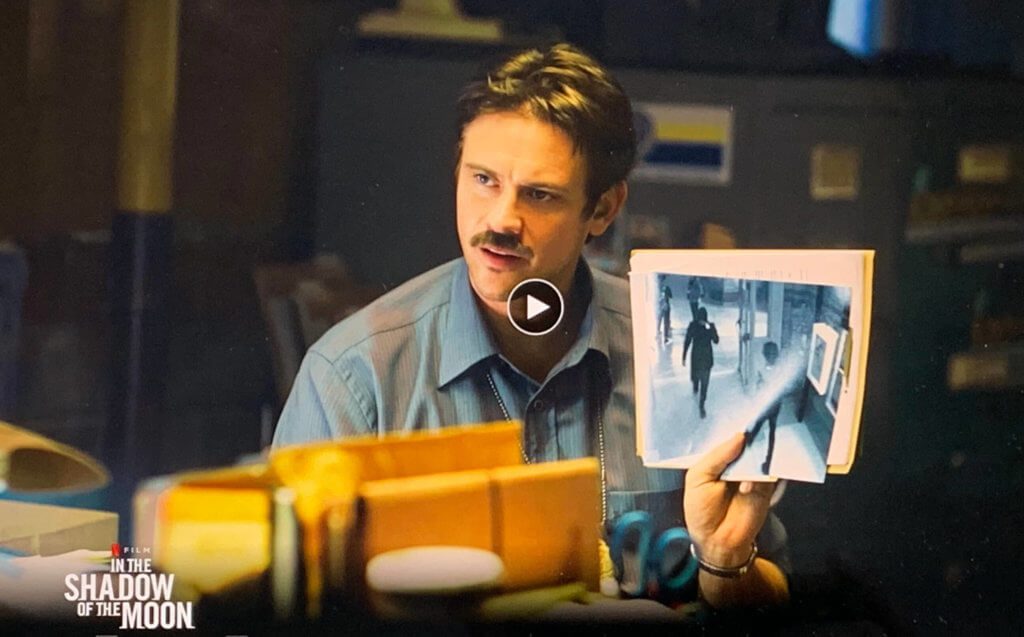 Exactly nine years later, however, murders with the same cause of death happen again and the suspect Rya is seen again, who is obviously not dead after all. For a short time, another scientist appears in the homicide department who babbles about the blood moon and a connection between the series of murders and his experiments, but is not taken seriously by the police - basically a situation that most scientists should be familiar with - see climate change. ;-)

I find the scientist's explanation funny here, because somehow you have to find an "explanation" in the film for the strange behavior of reality. He argues that the blood moon has an increased electromagnetic activity, which enables things or people from "another room" to come into our room for a short time. Well, let's ignore this half-hearted explanation, because the story is otherwise quite entertaining.

Now the thing starts, because the film jumps again and again for another nine years, since the exciting things always happen at the time of the blood moon.

Not only does it look like old Dexter, it is! Unfortunately, his role in this film is far less humorous.

From my point of view, the film is a useful mixture of serial murder crime and time travel scifi. I was surprised to see good old Dexter actor Michael C. Hall again. Who the series "Dexter"Haven't seen from 2006 and is not afraid of blood and thrilling thrillers, he should take a look at the series.

But back to "In the Shadow of the Moon": It is well structured and has some aha-effects when you notice that things you have seen in the past can be explained by actions in the future. The ending is not necessarily predictable either, which I find very pleasant in such films.

Only the end - which is already satisfactory in terms of the story - seems a bit strange in the implementation, because at the end the film explains with a narrator and flashbacks what the point of time travel was. That gives a bit of the feeling that the director didn't feel like thinking about how this could have been conveyed with pictures. Here he disappoints Director Jim Mickle unfortunately something. But he did a great job for the rest of the film.

I made the film very worth seeing and was delighted to have found something about time travel again. The film doesn't have as many breathless moments as it does Looperwhich I find extremely good, but I would no doubt watch it again. In the IMDb "In the Shadow of the Moon" only got 6,2 out of 10 points, which I don't think much, but even Looper only got 7,4 - absolutely incomprehensible! ;-)

Which time travel films can you recommend? I would like to put a few more of them on my watchlist and look forward to tips from you.