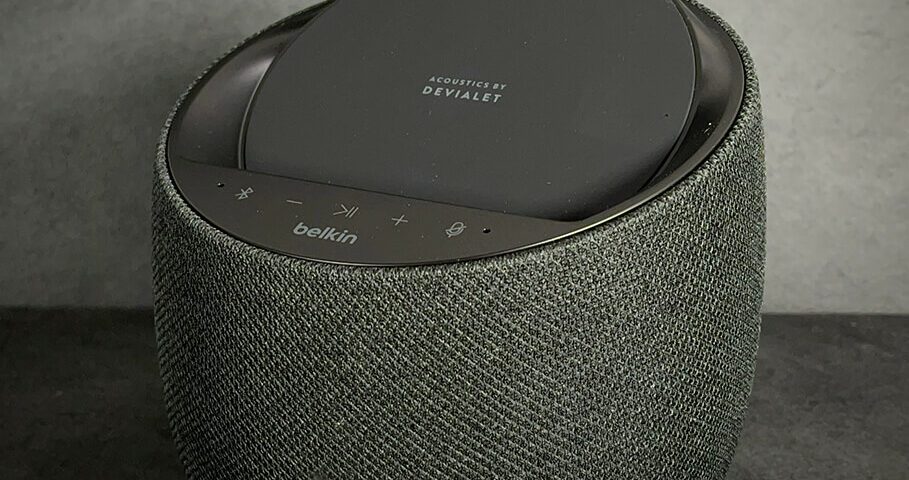 I have to admit, when I first heard about Belkin with the Soundform Elite When I launched a smarthome speaker, the first thing I thought about was great sound. Belkin is better known to most as a manufacturer of iPhone, iPad and Mac accessories, and I had never seen a speaker from the brand before.

Devialet is responsible for the sound

I think it was a smart move by Belkin the maker Devialet for the audio part of the Belkin Soundform Elite. This brand, in turn, may be familiar to some people from the speakers Devialet Gold Phantom Wireless, Phantom Reactor 600 and Phantom Reactor 900that have to be absolutely impressive in terms of sound when you read the reviews in various tests. At the same time, they are also in a different league in terms of price than all loudspeakers that I have been able to test so far.

So I am all the more pleased that with the Belkin Soundform Elite I have now got a piece of Devialet technology to the test. 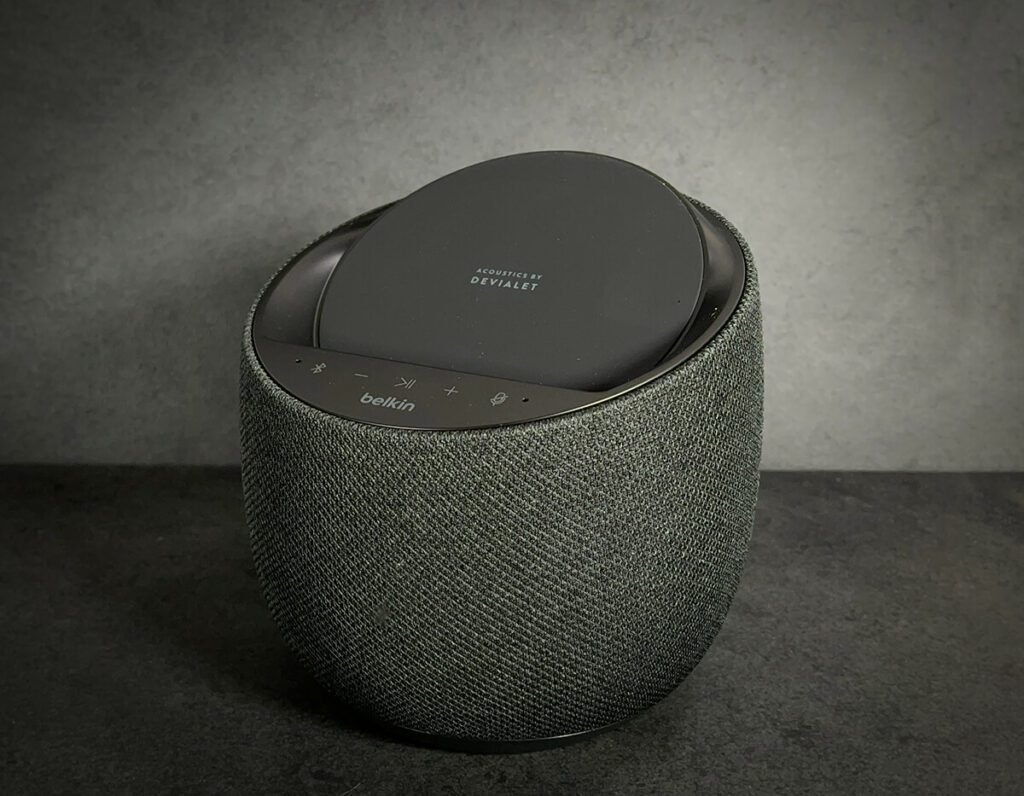 The Belkin Soundform Elite is definitely a small design piece that sounds pretty good too.

I think, just because of the comparable price and since many readers have an Apple HomePod, I would like to compare the sound with this device.

The Belkin Soundform Elite does not support HomeKit or Siri, but at least you can charge your iPhone in the Qi charging tray. For this reason, I also find the speaker interesting.

How it performs in a direct sound comparison with the large HomePod (not the Mini!), I will describe below.

The Belkin loudspeaker was made available to me for two weeks to test. However, there was no condition or payment associated with it. Anyone who reads my tests regularly will know that I rate products very critically and - if something is cheese - I also advise against a product. You can be sure that I won't recommend a device just because the manufacturer made it available to me as a test. 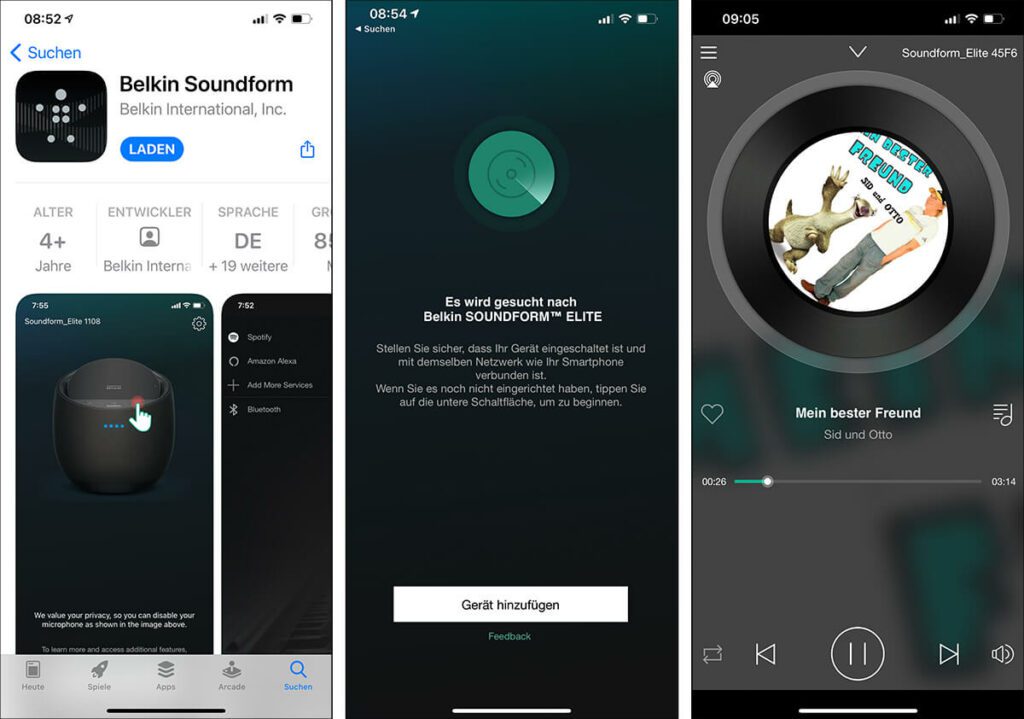 A Belkin Soundform app is available from the App Store to set up the speaker. For setup, the Belkin app wants access to Bluetooth and WiFi.

As always, I would like to deal with the technical data of the device (almost) right at the beginning of this article:

Loudspeakers with Qi charging dock - always a matter of taste

Perhaps one or the other still knows the loudspeakers that were previously offered around the iPhone. You had boxes with a 30-pin connector so that you could - and had to - clamp your iPhone directly into the loudspeaker. With the switch from 30-pin to Lightning, you had a music dock that could no longer accommodate a current iPhone and was therefore relatively meaningless. From my point of view, quasi electronic waste.

Fortunately, these concepts are now obsolete and manufacturers offer wireless music transmission, but you can still find speakers here and there, such as the Soundform Elite, with a space reserved for a smartphone. 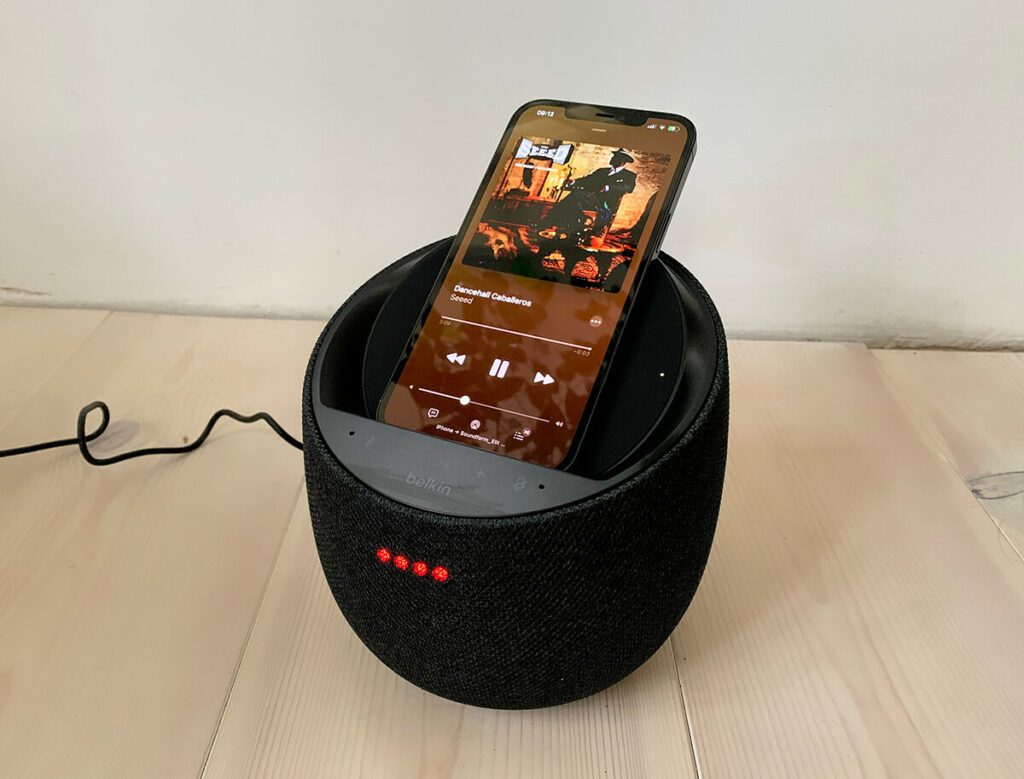 The iPhone 12 Pro Max in the Qi charging dock of the Belkin Soundform Elite - wireless charging and listening to music work fine together (Photos: Sir Apfelot).

In this case it is a kind of shelf that doubles as a Qi charging pad. You put your iPhone in the top of the speaker and it charges while you use it.

The "problem" is that the speaker always looks a bit strange when there is no iPhone in the shelf upstairs. I think it seems like something is missing there - which is actually the case. Everyone has to decide for themselves whether they like it or not. On the other hand, it is very practical in everyday life that I can quickly insert the iPhone up there to supply it with power. You can see: pros and cons ... as with everything in life. 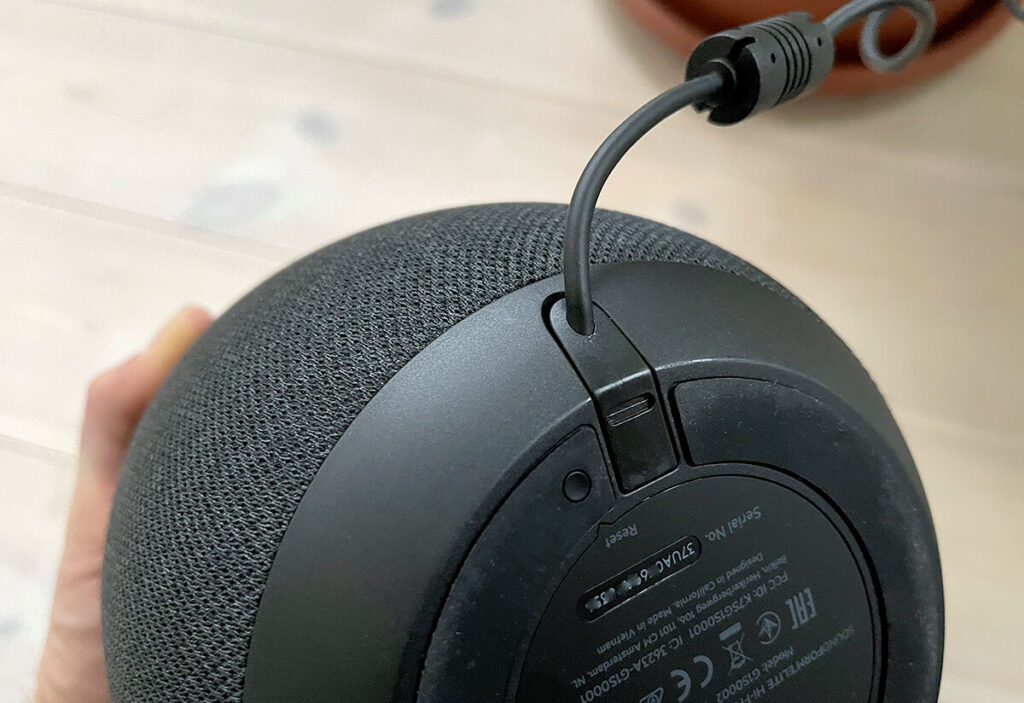 The reset button is located on the underside for resetting. You can also see how well the power cable fits into the shape of the speaker.

Optics and design of the Soundform Elite speaker system

I think the round shape is very successful. The HomePod is also not intrusive to me because of the cylindrical shape of the housing and fits well into almost any room.

Belkin's Soundform Elite is similar. It's elegant, but reserved when it comes to optics. It looks great on the desk, but can also find a place in the kitchen or living room.

The dock on the top is built in so discreetly that it doesn't look very annoying if there is no iPhone there. Nevertheless, I would personally like a model that doesn't have a shelf for the smartphone.

The processing of the Belkin Soundform Elite was definitely not saved. Everything here looks very valuable and even the power plug has been designed so that it fits into the rounded base plate. 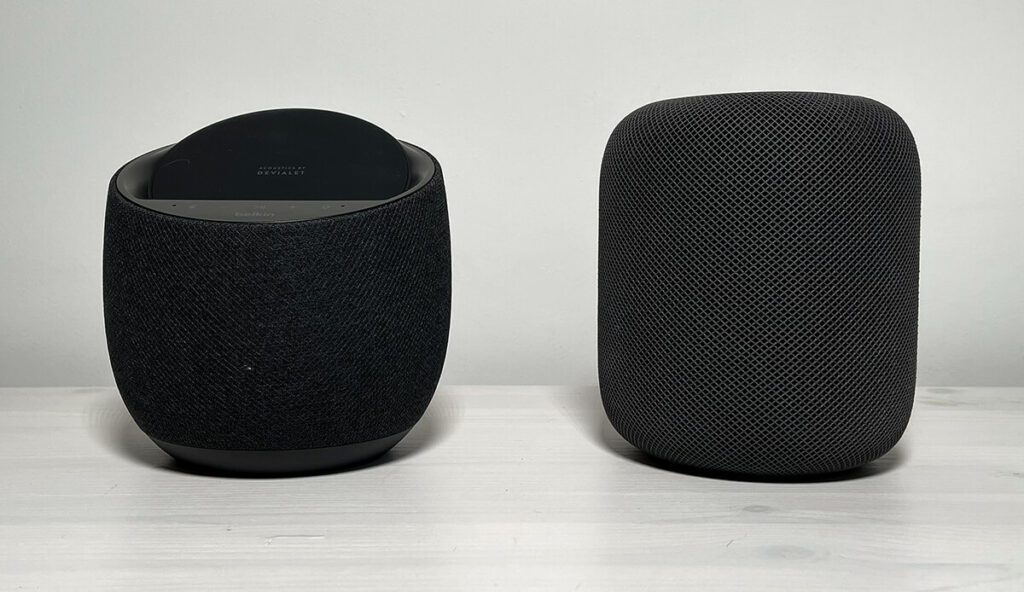 The audio comparison of the Belkin Soundform Elite shows that its sound is very close to the Apple HomePod (Photos: Sir Apfelot). 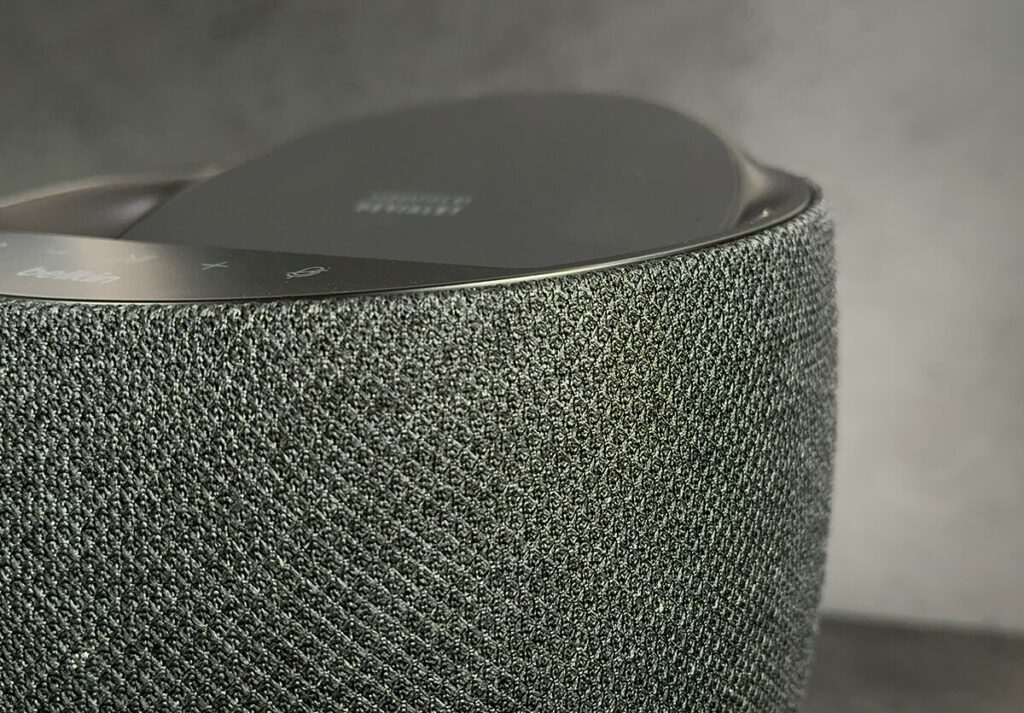 The fabric covering makes the Belkin Soundform Elite absolutely suitable for the living room and I even like the pattern more than the pure black that you find on the HomePod.

The sound of the Belkin Soundform Elite compared to the HomePod

As already mentioned, you will find Devialet drivers and Devialet audio technology in the Bluetooth jukebox. That alone is enough for many hi-fi friends as a guarantee that the device will get decent sound.

I once put the HomePod and the Soundform Elite next to each other and switched from one to the other while listening to music and also heard both in parallel - thanks to AirPlay 2 that's no problem.

My findings: There are minimal differences, but actually they sound quite similar. When it comes to bass-heavy music, the HomePod should be a bit ahead, as it has a room-filling sound.

However, if you switch to songs by Adele or other musicians, where the voice is in the foreground, or if you like to listen to classical music, then the Belkin Soundform Elite offers the clearer sound, as it gives a little more in the middle frequency spectrum than the HomePod.

But it would be wrong to say that the Belkin Soundform Elite has a weak bass, because it has a very crisp and clear bass thanks to the double woofer. I would just say that the HomePod sounds more like pressing the loudness switch, while the Soundform Elite sounds a bit cleaner and clearer.

It is always difficult for me to put this subjective sound perception into words, but I hope you have roughly understood what I mean. 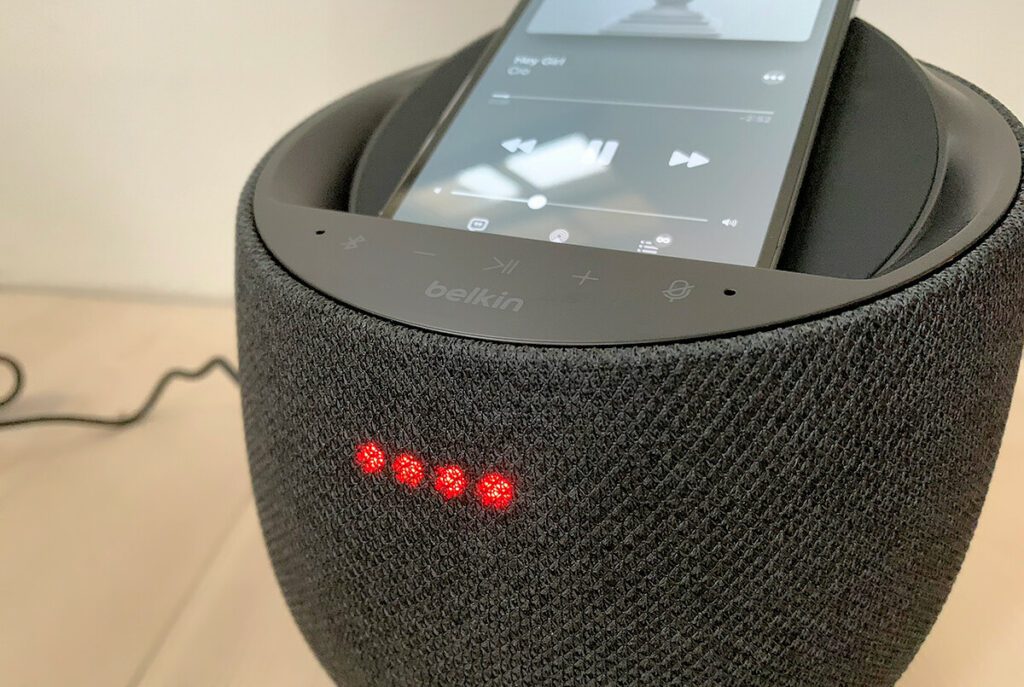 The LEDs indicate the status of the speaker and which to signal between different colors and different states.

If I had to decide which speaker to use, my tendency would still be for the HomePod. The advantages of being a HomeKit bridge, integrating with the Apple TV and being able to receive Siri commands weigh very heavily on me.

However, if you rely on Alexa anyway and have nothing to do with HomeKit, you can get the Belkin Soundform Elite without hesitation. The sound is great, it has an Alexa integration and can also charge the iPhone.

The price-performance ratio is absolutely okay in my opinion. I will definitely miss it if I have to put it back in the box and send it to Belkin in a minute.

If you want to check out the Belkin SoundForm Elite, you will find it here at Amazon.