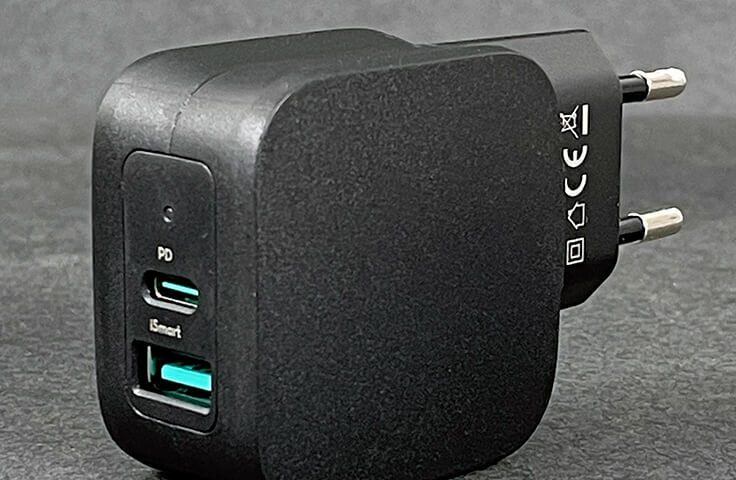 Lately I have been seeing a lot of USB-C power supplies that I have received for testing purposes. It is currently a small mini power supply from RAVPower with a USB-C and a USB-A port. It's about that RP-PC144 with 30 watts Overall performance, which the smaller sibling of the 65 watt RAVPower power supply (RP-PC133) that I was only able to try recently (here to the test report).

Note: The power supply was provided to me by RAVPower free of charge, but this did not affect my assessment of the device. 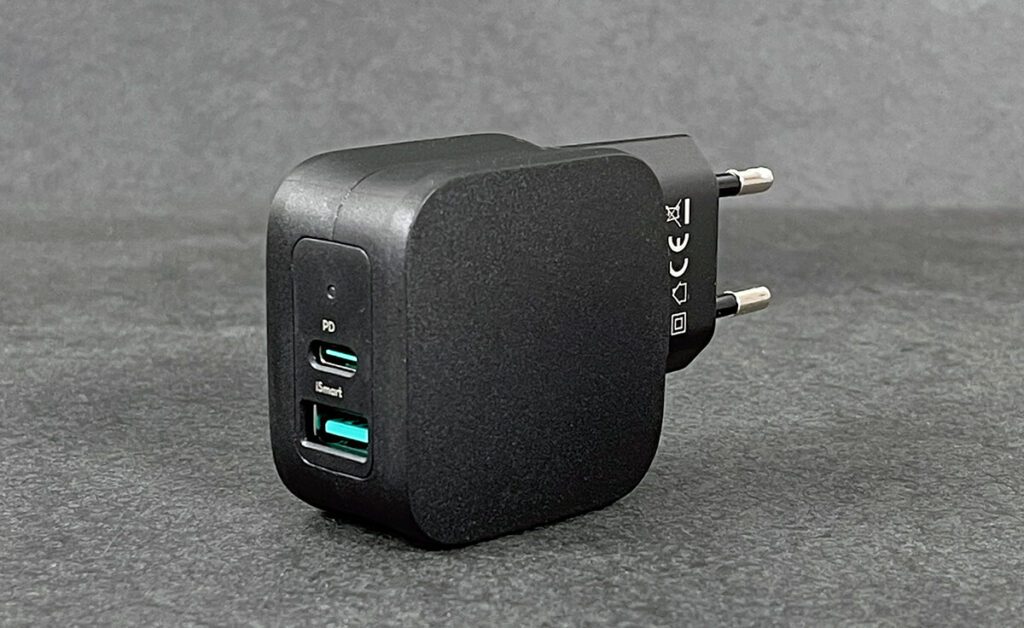 This review is about the RAVPower RP-PC144 USB-C power supply with USB C PowerDelivery and USB A QuickCharge (photos: Sir Apfelot).

Here you can find the technical specifications of the RAVPower power supply:

Here is an excerpt from the data sheet or the operating instructions for the RP-PC144 power supply unit.

As already mentioned, I had also tested the larger model of the power supply. Since it is only slightly larger than the RP-PC144 in terms of its construction, it makes sense to make a comparison.

Both devices have a USB-C and a USB-A output and are therefore relatively identical. From my point of view, the difference lies primarily in the area of ​​application, which I would now like to explain in more detail. 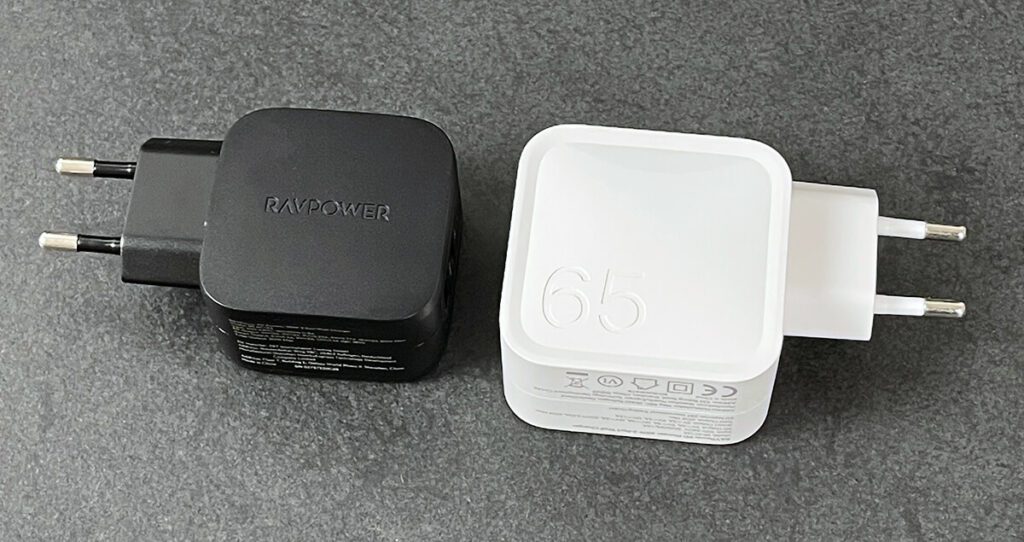 The 65 watt model (RP-PC133) In my opinion, it is especially useful for owners of MacBook Pro and iPad Pro models. The smaller RP-PC144 with only 30 watts only gets further if you have one of the new Apple Silicon MacBook Pro devices. And even these charge quite slowly with the small power supply unit. For this reason, as a MacBook owner, you should rather use the RP-PC133, which I do here in the test have.

If you have an iPad Pro and maybe an iPhone, you should come with it the small 30 watt model (RP-PC144) be adequately served. It can charge the iPad Pro via the USB-C port and at the same time supply an iPhone with power via the USB-A port. You could only charge faster by using both devices via USB-C PowerDelivery charges, but neither model offers this option.

Workmanship and quality of the RAVPower RP-PC144

But let's get back to the power supply, which we are actually talking about here. The RAVPower RP-PC144 is small, light and, with 30 watts, also has a decent output if you take its size into account. The workmanship seems robust to me and nothing about it looks rickety or "cheap".

Visually, the power supply unit is not a special feature, but with its black color it fits into the range of standard power supply units. Only people who would like to have a white model because it goes better with the Apple charging cables are left with nothing here, but at the bottom I am linking the two 65 W and 90 W models that are available in white. 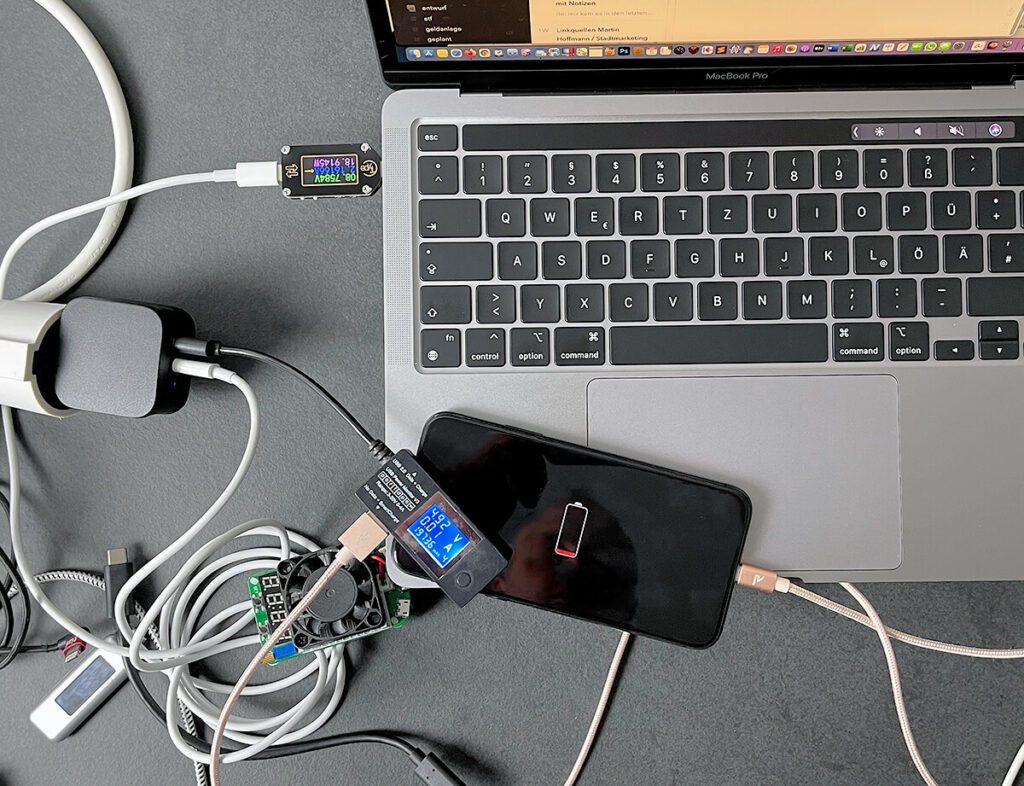 When measuring, there is always some chaos on the table. In addition to the RAVPower power supply, MacBooks, iPhones, iPads, power banks and USB multimeters are always flying around on the table (photos: Sir Apfelot).

Test: my measurements on the RAVPower power supply

I did some measurements with the RP-PC144. The first thing I always check with the power supplies is the standby power consumption. Amazingly, I measured a value of 0,0 watts here, because my measuring device cannot measure such low power. This is impressive in that I've never had a power supply that didn't use at least 0,2 or 0,3 watts. 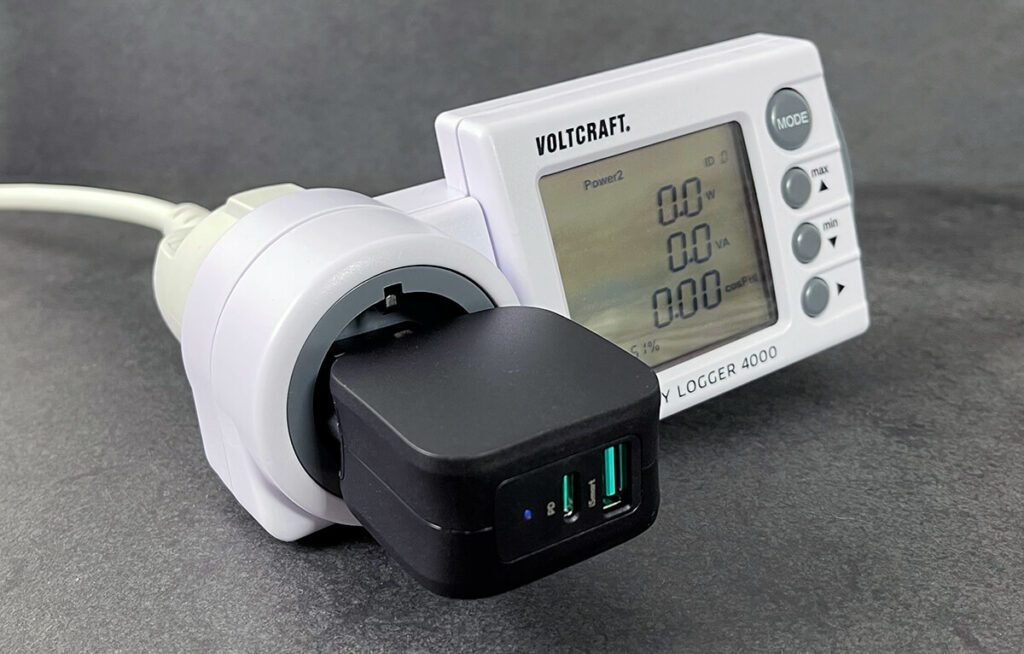 The stand-by power consumption is not measurable for me with the RAVPower power supply unit, because my measuring device, which is actually specially designed for stand-by currents, cannot record it.

The next test was charging my 13-inch Apple Silicon MacBook Pro. I had it with my proven unloading technology processed until the battery level had shrunk to approx. 50%.

Then I plugged it into the RAVPower power supply (left the USB A port free) and charged it for 10 minutes. Next I plugged my iPhone XS completely empty into the USB-A port and charged the MacBook Pro M1 for another 10 minutes. Here are the results of the two measurements: 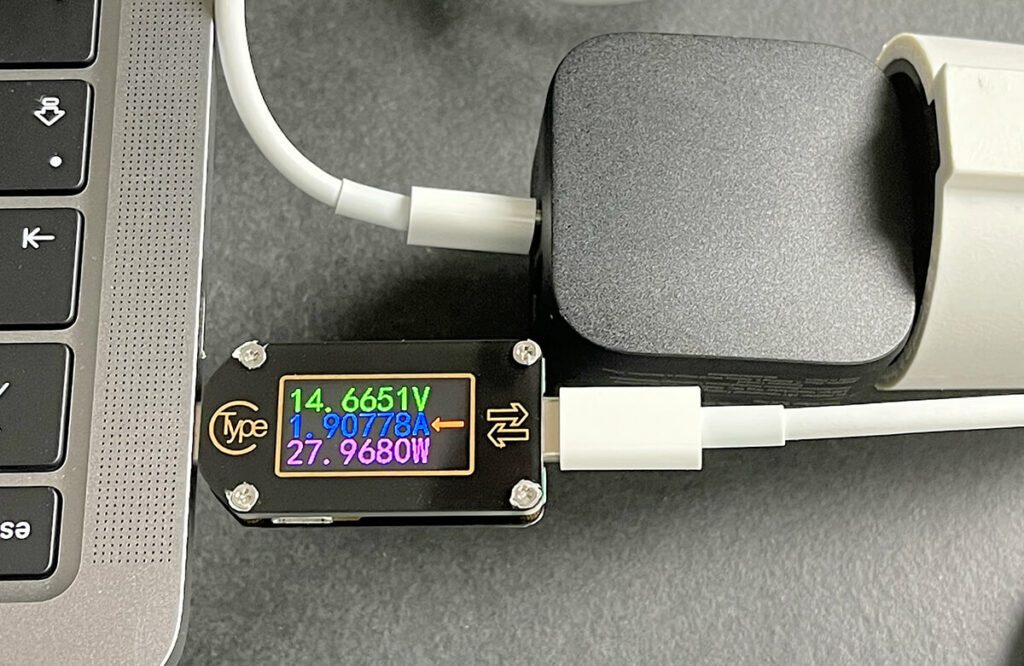 If I just connect my Apple Silicon MacBook Pro to the power adapter, it charges with about 28 watts and thus gets about 10% more battery capacity every 5 minutes - even while I'm working on it. 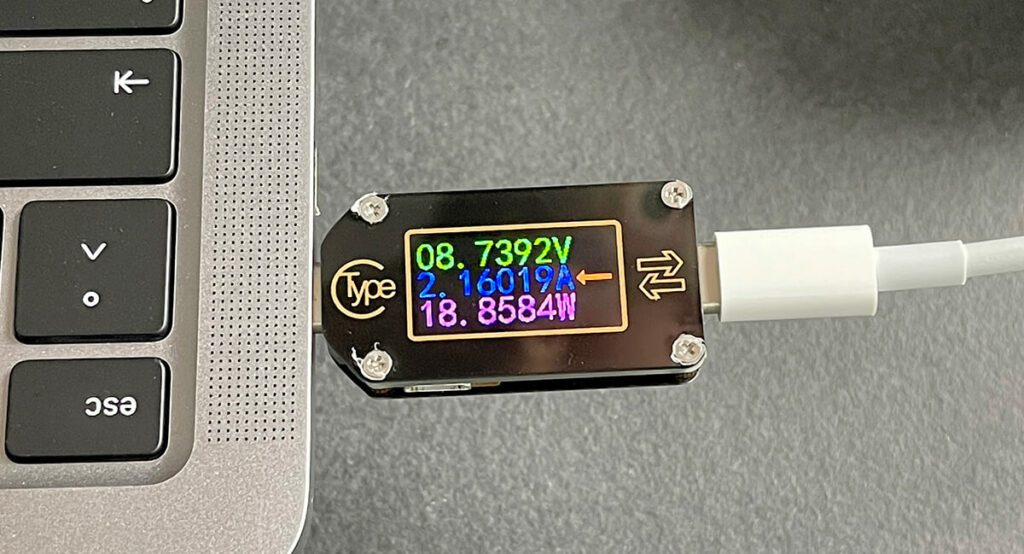 As soon as the USB-A port is also occupied, the charging voltage at the USB-C port drops to 8,7 volts and you only get 19 watts of power.

USB Power Delivery switchover when USB A is occupied

If you only use the USB C port to charge a MacBook Pro, the device charges with almost 28 watts (14,6 V * 1,9 A). However, as soon as you additionally charge a device via the USB-A port, the charging voltage at the USB-C port drops to 8,7 volts, so that we only get 19 watts of power for the MacBook Pro.

The good news: Even if I charge the iPhone XS and my MacBook Pro (M1) while they are running, the MacBook Pro charges slowly. So you can use the power supply for Apple Silicon Macs.

For Intel Macs, I would definitely use a more powerful power supply, as these models require significantly more power than the Apple Silicon Macs. 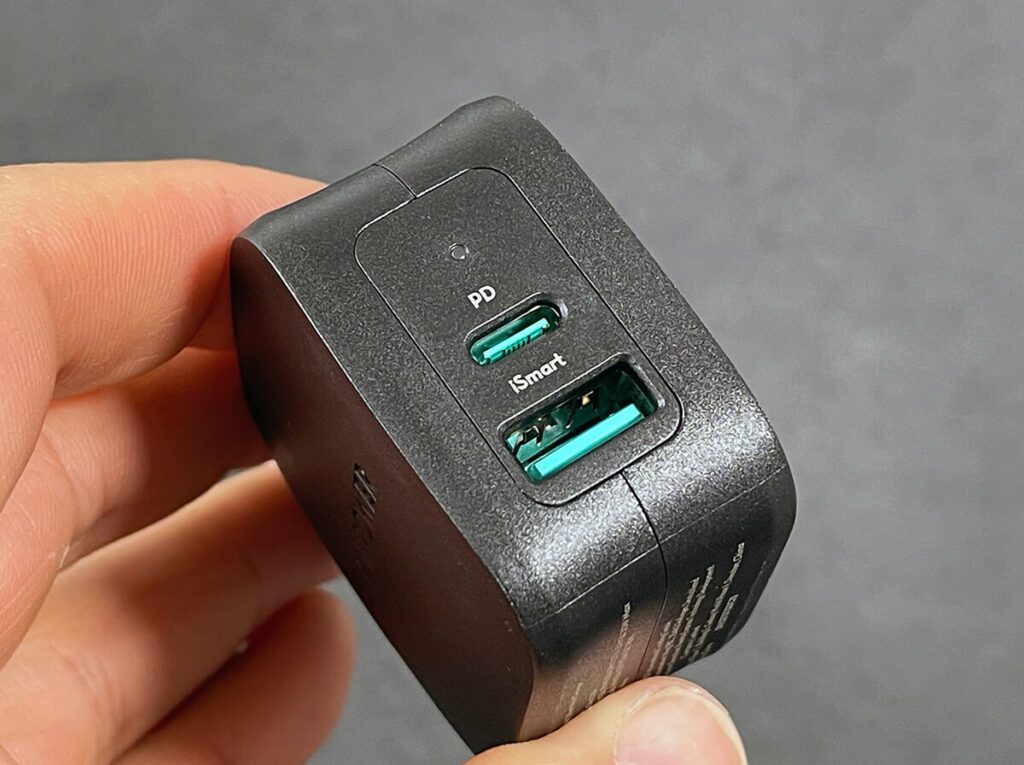 The RP-PC144 is small and handy and offers two charging ports that offer enough power for tablets and smartphones (photos: Sir Apfelot).

I also noticed an interesting thing during the measurements. Although the M1 Macs are very energy efficient, they still use a lot of power to charge their battery when it is empty (but this happens very rarely).

When I connected the MacBook Pro (M1) with a battery level of approx. 50% to the larger RAVPower power supply unit (RP-PC133), it took 58 watts directly to charge.

The 65 watt RAVPower power supply can also supply 20 volts for USB PD and also offers 2,9 amps of current. The MacBook Pro (M1) can use more power, but ultimately it also charges at a reasonable speed with smaller power supplies. 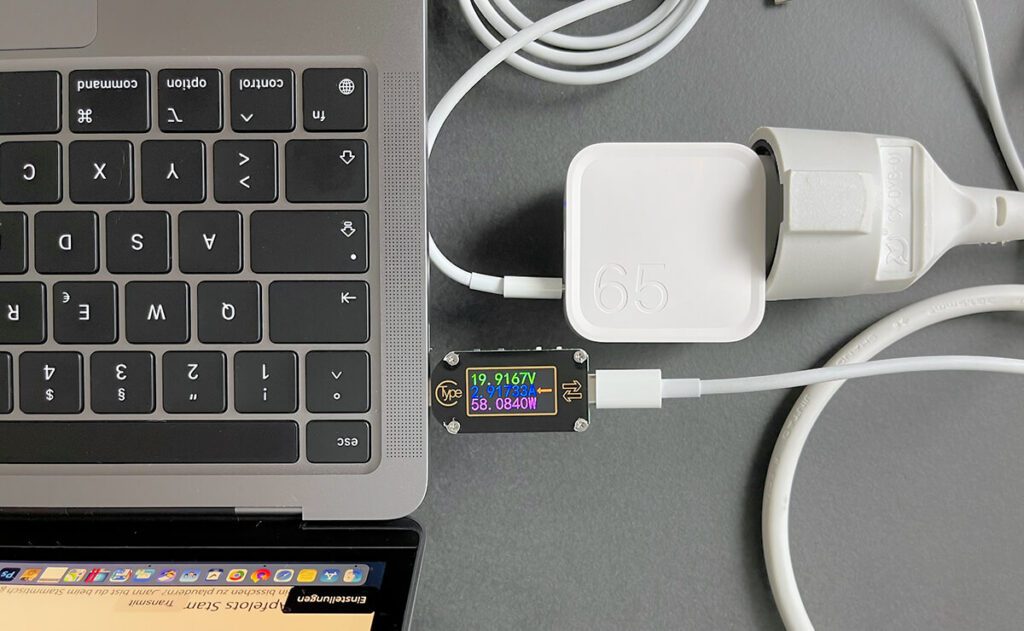 If the power supply is explicitly for a MacBook Pro, I would prefer to use the 65 watt device from RAVPower, as it charges my M1 MacBook Pro almost twice as fast as the small 30 watt power supply (photos: Sir Apfelot).

Maximum performance at the USB-A port only via Quick Charge

According to the technical data, the RP-PC144 can deliver up to 18 watts at the USB-A port. You only get this out if you plug in a device that supports Quick Charge with 12 volts (instead of the usual 5 volts). This is what Samsung Galaxy models do, for example, but iPhone and iPad models rely on fast charging via USB-C power delivery and cannot query the maximum power at the USB-A port.

However, this is not a big problem if you don't want to fill your iPhone halfway in 30 minutes, but can manage with 40% full per 30 minutes. After about 1,5 hours, the iPhone is fully charged even at the USB A port, so I don't see a big problem here. 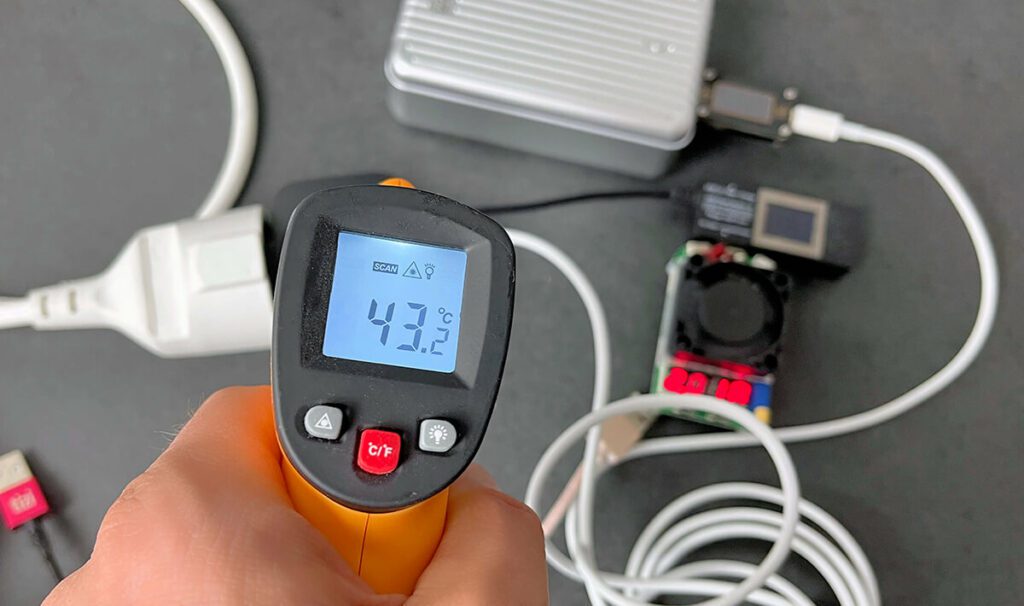 The warmest spot that I could find after 10 minutes of full load was around 43 ° C, with the temperature dropping to 20 ° C towards the edge.

To check what the name of the RAVPower power supply is, I used both ports and finally accessed 32 watts of power over more than 10 minutes. After the time had elapsed, I used my infrared thermometer to check the name of the housing in different places.

The hottest spot I could find was around 43 ° C, but right next to that point the temperature dropped so we're just above 20 ° C at the other corners. There is no point where you can actually burn your fingers.

The heat development is completely within limits and even if you should charge at maximum power for a long time, you don't have to worry about overheating. 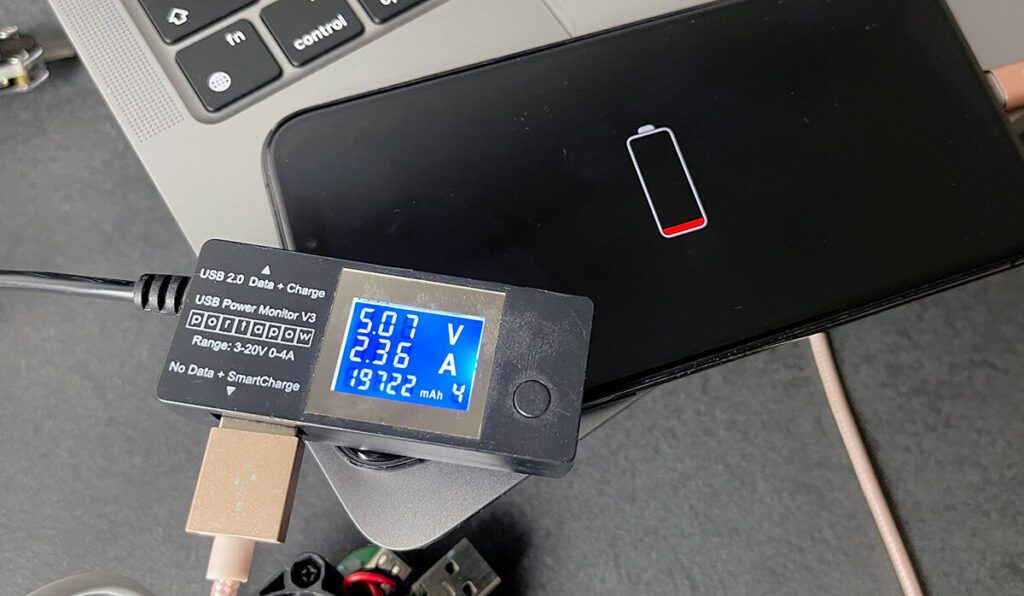 My completely empty iPhone XS charges the power supply with 5 volts and 2,3 amps, which is a decent charge. With USB Power Delivery over USB C, however, it would get even more power (Photos: Sir Apfelot).

Conclusion: the RAVPower RP-PC144 is perfect for smartphones and tablets

With 144 watts, the RAVPower RP-PC30 is not really suitable for charging MacBook Pro models with an Intel chip. In the case of the new Macs with the M1 chip (Apple Silicon), we are still in an area where you can say that it works well, but you have to reckon with about twice the time when charging that when charging with a 60 Watt power supply would reach.

I see the RAVPower RP-PC144 more as a power supply for smartphones and tablets. An iPad Pro and a large iPhone 12 Pro Max charge it with a total of 30 watts of power without any problems. With the support of USB Power Delivery on the USB-C port you can also charge Apple iPhones and iPads particularly quickly at this port.

If you are interested in the RAVPower power supplies, I have linked a few options on Amazon for you:

If you absolutely need a white power supply, you can choose the RP-PC133 or the RP-PC128, as these are the only models available in white.