Inateck MercuryBox in the test: waterproof Bluetooth speaker for outdoor use

For a few weeks now I have been testing an Inateck Bluetooth speaker: the "Inateck MercuryBox" with the model name BP2101. The mobile loudspeaker works with Bluetooth 4.0 and offers a fast pairing when it is switched on and low power consumption during operation, so that according to the manufacturer, battery runtimes of up to 15 hours are possible. The range of the Bluetooth connection is approx. 10 meters (without obstacles). 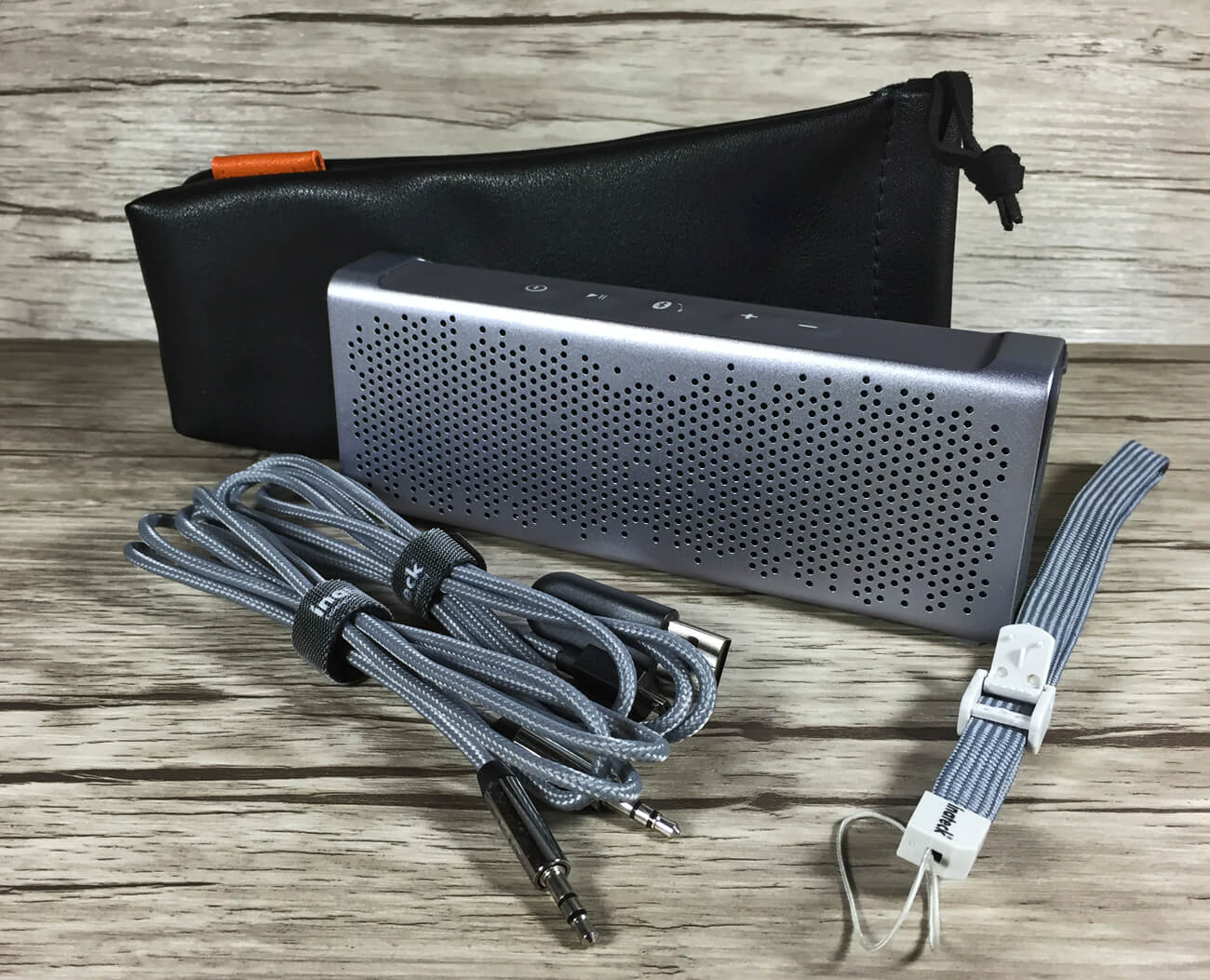 The scope of delivery of the Inateck MercuryBox BP2101 Bluetooth speaker is quite extensive and also includes high-quality, sheathed audio and charging cables as well as a bag made of synthetic leather (photos: Sir Apfelot).

Technical data of the Inateck BP2101

Here is a brief summary of all the important information about the mobile Bluetooth speaker from Inateck:

My first test on devices of this type is always quite simple: unpack and try to get it going without instructions. I already have some experience with mobile Bluetooth boxes (see Jawbone Big Jambox, Terratec Mobile Boost, Avantek Magic Cube and other test reports), so that everything runs as usual with the Inateck: To pair it, you switch it on and keep the power button pressed for a few seconds longer until the display on the Bluetooth button on the box flashes. A new device called "Inateck MercuryBox" will appear in the Bluetooth menu on the iPhone. You select this to pair the mobile BT speaker with the iPhone. As soon as this is done, the music is played back via the Inateck box.

External appearance: robust and suitable for outdoor use

Once you have unpacked the Inateck BP2101, you should be surprised by the exterior, because the speaker is very robust and valuable despite the price of less than 50 EUR. The majority of the case consists of approx. 1 mm thick aluminum, in which plastic inserts have been built. However, all edges, corners and surfaces that could be affected if the portable loudspeaker should fall are made of aluminum, so that the loudspeaker is also ideally suited for camping or other outdoor activities. In my case, however, it is used more "indoor" and therefore only has to endure the "rough" handling of my children. ;) 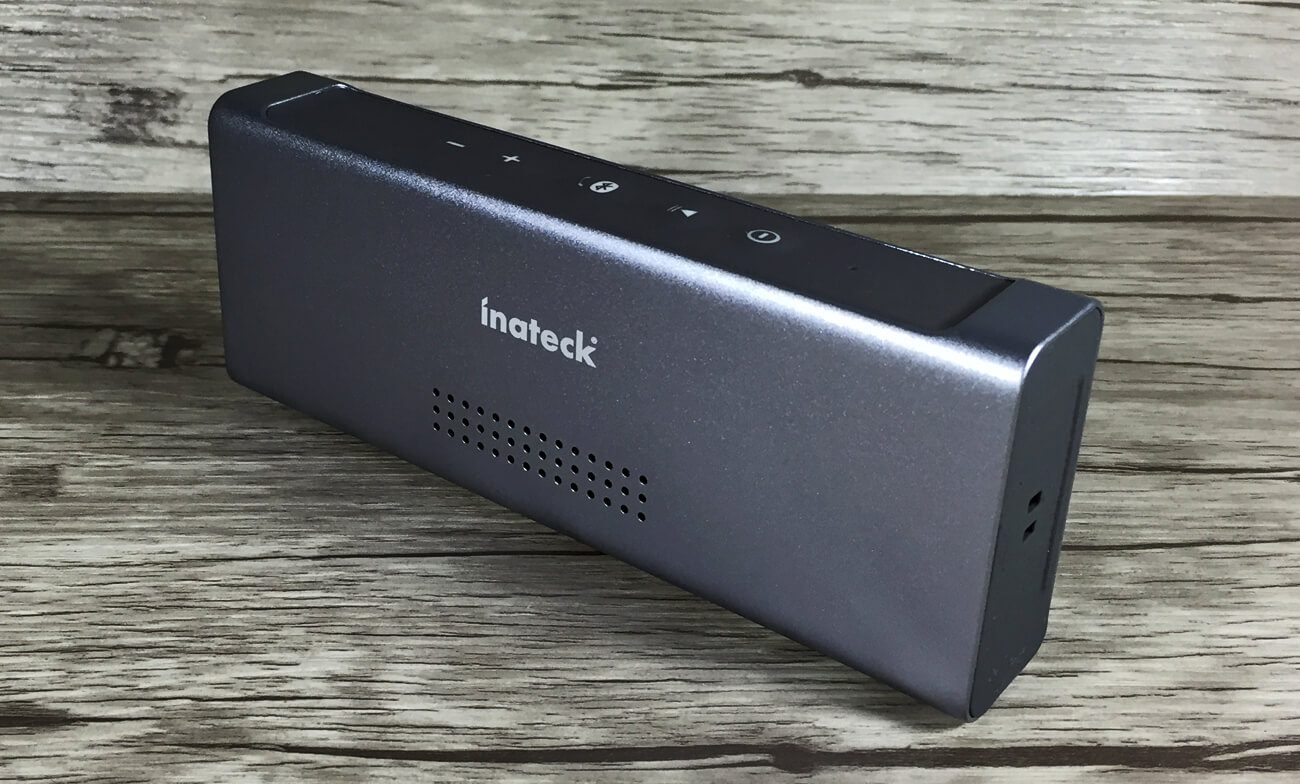 The back of the Bluetooth box has a few ventilation holes, which, however, are also subject to IPX5 certification and do not affect the water resistance.

Personally, I think the design and the materials used are very successful. In my opinion, it would be justified to call it a "design bluetooth speaker". :) Due to the aluminum, which is the seamless cover of the box, the box fits perfectly with most Apple devices: MacBook Pro, MacBook, iMac, iPhone and the like usually have a high aluminum content and are design-wise really tasty. 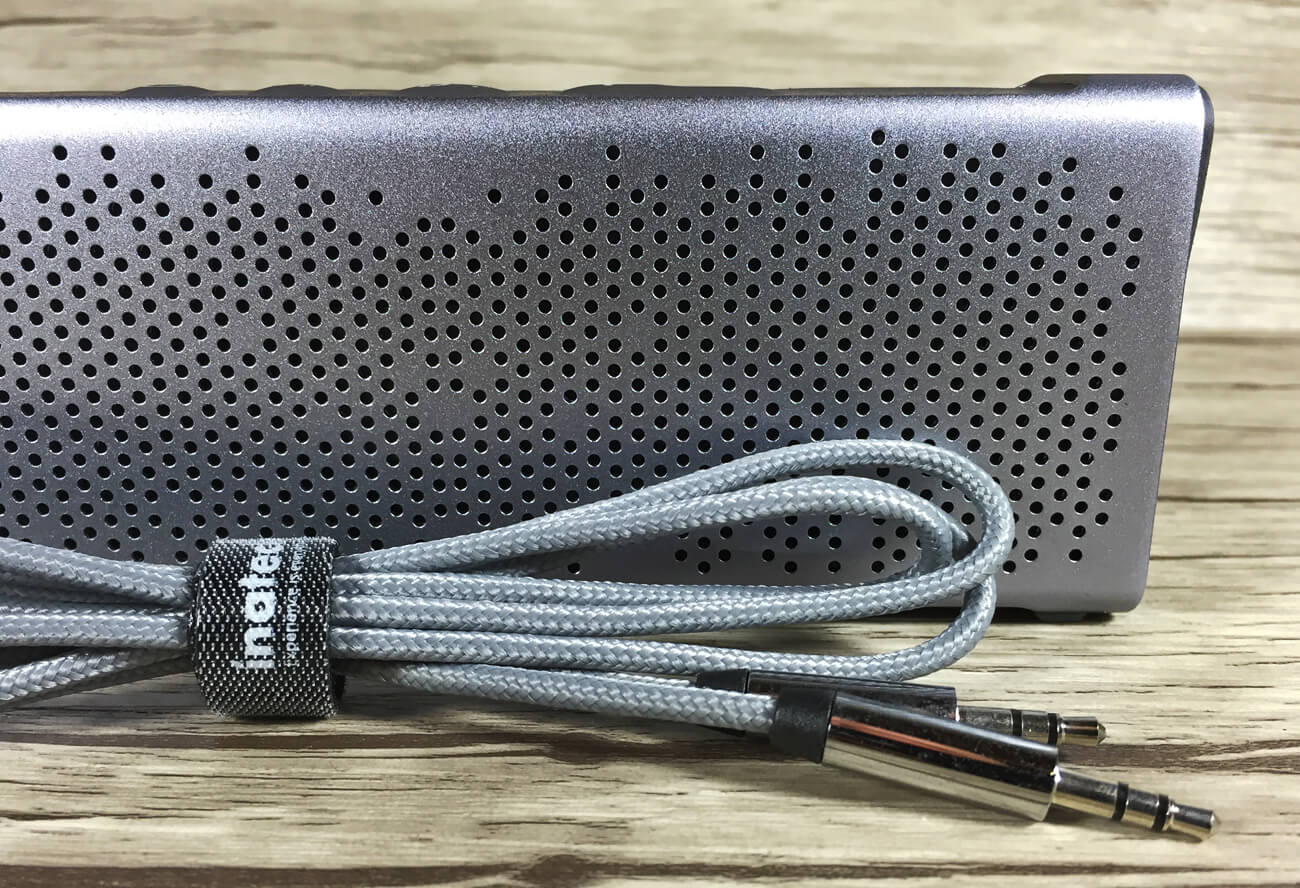 High-quality, braided audio cables and the attractive front of the Bluetooth speaker show the quality that Inateck strives for in development. The Velcro cable ties are an extra that greatly improves transport in the synthetic leather bag.

A special feature of this BT speaker is the IPX5 certification, which means that it can be exposed to a (not too strong) jet of water from all directions. This means that you can easily take it with you to the beach, in the shower or even on the boat.

How waterproof is the waterproof Bluetooth speaker from Inateck? The Sir-Apfelot water test with bread board and tap shows: the IPX5 certification is justified. ;-)

However, the manufacturer expressly advises that it should not be immersed in water. The reason is probably that the rubber flap that covers the charging and audio connections does not permanently seal against the water pressure under water. In my test in the shower and under the faucet (see photos), however, it held everything. 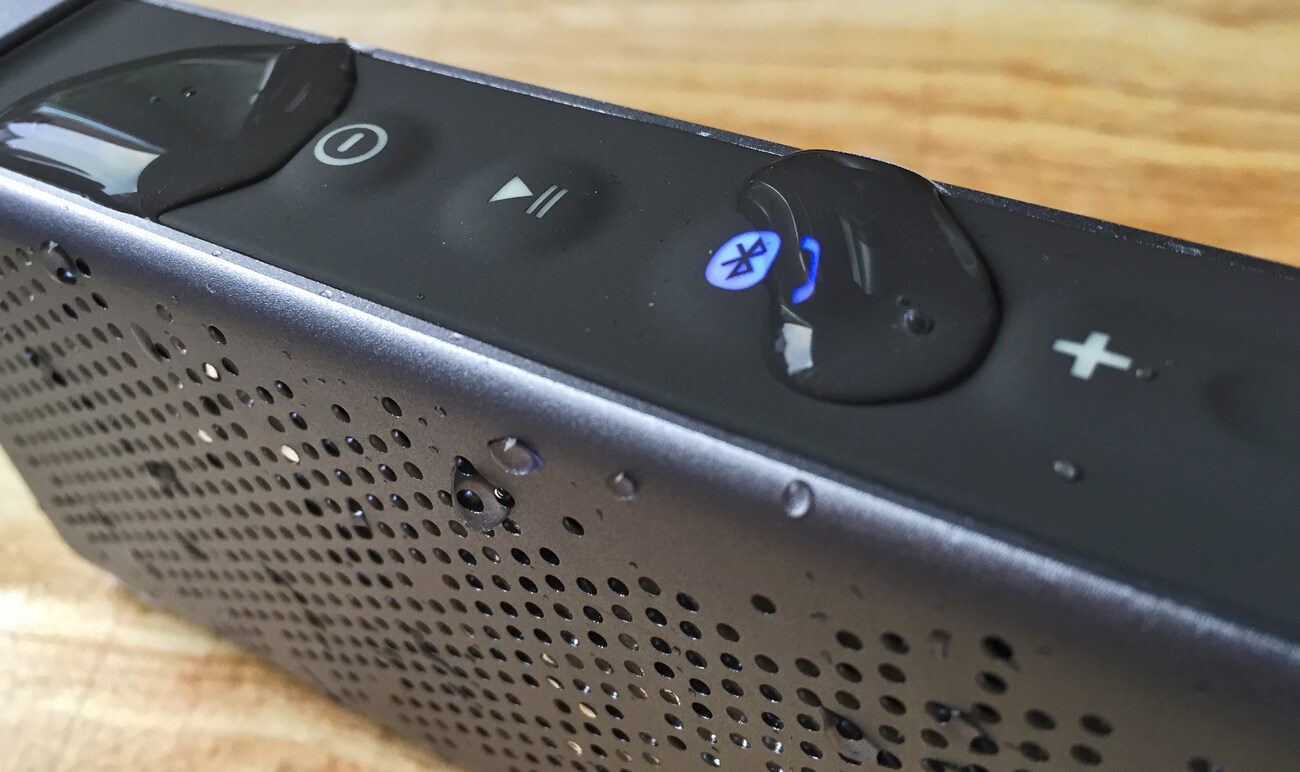 The controls of the Inateck BP2101 are completely waterproof and work even if there is still water on the buttons.

Just a hint: If you place the loudspeaker in such a way that the water can run into the small openings for the loudspeakers, the sound will be very flat until the water has completely drained off again. The sound of the box is not permanently damaged.

Practical: the battery level display in the iPhone

In addition to the Bluetooth symbol, a small battery also appears in the bar on the iPhone display, which shows the battery level of the Inateck Bluetooth speaker. This is very helpful with most Bluetooth devices, otherwise you cannot tell when the battery is running low. The Inateck MercuryBox BP2101 even has a red LED on the box that lights up when the charge is nearing the end - even more practical because it is very noticeable. :-)

In my test, the loudspeaker easily managed 10 of the 15 to 10 hours runtime suggested by the manufacturer on one charge. Although I mostly use it for audio books and less often for loud music.

The sound: convincing for this price range

In my opinion, the sound is always the most important criterion when evaluating portable Bluetooth speakers. Here, however, I think it's important to clearly define the price segment in which you are operating. The Inateck MercuryBox is priced below the 50 euro mark - that's why I think a comparison made with other boxes in this price range is fair. Of course, a Bose Soundlink Mini or a JBL Charge makes a stronger bass, but these candidates also cost three or four times as much and are also larger than the Inateck loudspeaker.

In the range of 50 EUR, the Bluetooth speaker from Inateck is definitely in the upper league in terms of sound. The sound is balanced and only overdrives if you turn it up really high (volume of the box to maximum and volume of the iPhone to maximum). To achieve room volume on my iPhone, all I have to do is turn it up fully and then set about 1/4 to 1/3 the volume on the iPhone. Then you can still work well with the music - phone calls are no longer possible at this volume. This gives you a rough estimate of how loud you can make the small Bluetooth box.

A tip at this point for more bass that applies to all small portable speakers: it is best to place the speaker in a corner or 20 cm from a wall or on a shelf. This increases the bass (works with every box) and you have a little more volume with the small "roaring cubes".

The Inateck Bluetooth speaker "MercuryBox" also impresses with its beautiful design: here a reflection in the Apple logo of the MacBook.

Hands-free kit - nothing for me

Actually, I didn't want to discuss the speakerphone in the box in more detail. On the one hand I am not interested in this feature because I never use it and on the other hand it was so bad in my only test that I had to switch off the box after 10 seconds in order to make "normal" calls to the person I was talking to. Apparently I was so quiet that the other person barely understood me. This could have been a one-time effect or it could be due to something else.

I just want to mention it here, but don't say anything bad about the box. If you like to read other opinions, you will find some reviews with positive statements about the hands-free function here at Amazon.

Operation of the Inateck MercuryBox

The operation is relatively simple and intuitive. The following buttons can be found on the top of the box:

The control elements of the Inateck Bluetooth box are easily accessible. The small opening for the microphone can also be seen on the far right.

The On-off switch is also highlighted with a red LED, which either indicates when the battery is low or flashes to indicate that the box is still being charged. When it has finished charging, this LED goes out.

Play pause button you can of course do what you expect: stop and start playback.

The Multifunction button on the other hand, has a little more in store: it can be held longer during operation in order to restart pairing mode. When a phone call arrives, you can answer it by pressing the multifunction button and end it by pressing it again. In addition, the button has a blue LED behind it, which flashes when the box is in pairing mode and which lights up continuously when a device (such as the iPhone) has been successfully paired with the BT speaker.

In my rating, I really have everything in the back of my mind: the low weight, the slim, elegant design (very handy), the simple operation, the low price and the good sound, which in my opinion definitely belongs to the upper class of small and cheap Bluetooth boxes heard for a price under 50 euros. 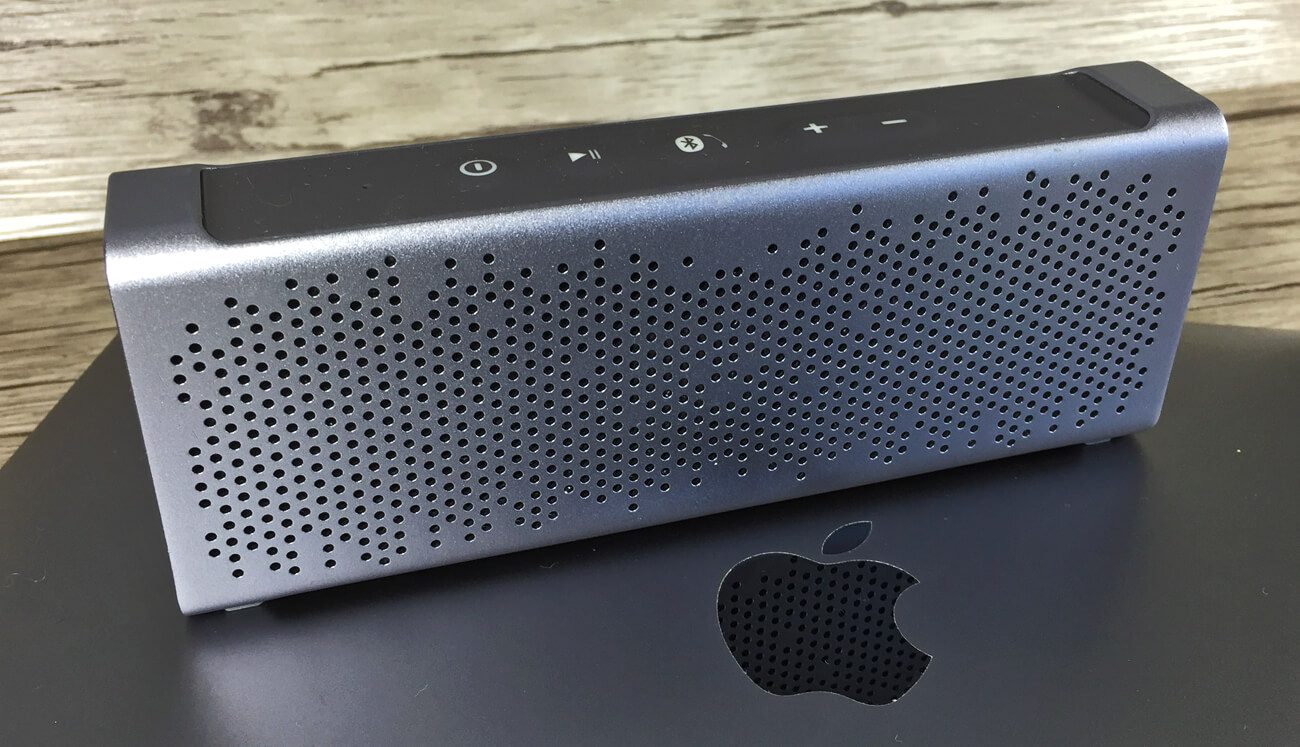 The Inateck BP2101 on the MacBook - a good duo, both in terms of design and sound.

Personally, the sound convinced me, but didn't knock my socks off, as I've heard a few different Bluetooth speakers and also know what larger and more expensive mobile BT speakers sound like. But of course this is in the nature of things: larger speakers usually have more resonance volume and therefore a fuller sound. The small Inateck BP2101 brings out a lot when you consider its size.

I would say the speaker is definitely a recommendation if you are looking for a good, portable Bluetooth speaker with a long battery life for 40 to 50 euros - it comes with an extremely successful design and a waterproof version. So perfect for the day at the lake or on the beach or simply for the shower, the kitchen or the terrace!

If you want to have a look at other customer ratings and current prices of the Inateck Bluetooth speaker, click the button to go directly to the Amazon product page: