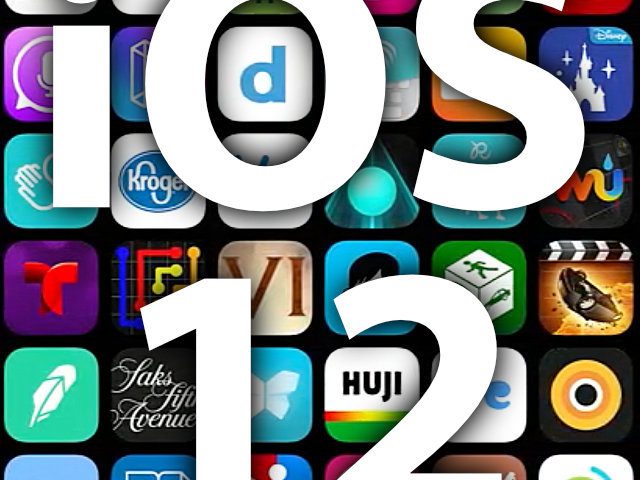 The kick-off keynote of the took place yesterday at 19:00 p.m. local time Apple WWDC 18 took place, at which around 6.000 developers were on site in San Jose. "Today is all about software," said Tim Cook after his introduction to the event - and it was like that. New devices like the iPhone SE 2 or new MacBooks were not presented. There was information about the new iOS 12, which you can download from autumn on your mobile Apple devices (up to the year of publication 2013). What this brings you, I have summarized for you in the following.

At yesterday's Apple June keynote, which introduced WWDC 2018, it was, among other things, about iOS 12. I have summarized the new features that come with it on the iPhone and iPad.

iOS 11 and the outlook for the future

After Tim Cook's traditional JuneKeynote opened Craig Federighi, Apple's senior vice president of software development. Among other things, he stated that iOS 11 is currently installed on 81% of compatible devices. In comparison: the current Android version can be found on around 6% of compatible smartphones and tablets. Federighi also commented on user satisfaction; for iOS 11 it is 95%.

The new iOS 12 should make people even more satisfied, as the performance can be doubled on average. For this purpose, the CPU should be fully used directly when tasks arise and then relieved more quickly. So far it has been slowly increasing the load and slowly released again. That puts more strain on the battery than the new type of use. This was highlighted especially for the iPhone 6 Plus - the following figures from practice:

An important change in iOS 12 will certainly be the "Grouped Notifications", that is, the grouped notifications on the start screen. These can be collected by app or service as well as by topic (news, apps, gaming, sport, etc.). They can be viewed, called up or removed as a whole group individually by tapping and swiping. This gives you a better overview on the lock screen and allows you to process notifications faster.

Augmented Reality is in the foreground

As expected, with iOS 12 there will be a stronger focus on Augmented Reality (AR). For this purpose, Apple has even developed a new file format in cooperation with PIXAR: USDZ. USDZ is supposed to bring scenes and objects into small files and be optimized for content sharing. By the way, another partner for the application of AR on iPhone and iPad is Adobe. As Abhay Parasnis, Vice President and CTO of Adobe, explained, there is now the support of USDZ in the Adobe Creative Cloud as well as the possibility to adjust files and objects integrated in real time on mobile devices.

Examples of the AR application on the iPhone and iPad

The app is called “Apple Measure”. Cupertino, which is intended to measure objects with the iPhone camera. Craig Federighi demonstrated the application, admittedly not a new concept, on a suitcase and a picture in a picture frame. With the latter, the rectangular shape was recognized directly, the sides were measured and the results were listed and displayed.

We saw another example of AR on the iPad last year: games. With ARKit 2, however, these should be even more extensive and applicable to multiple users and viewers. Apple introduced a game where players could shoot building blocks into buildings. Then came Martin Sanders, Director of Innovation at LEGO. He showed how you can expand real LEGO sets via AR, play with friends, build a semi-virtual city with characters and quests and even save them for later.

"This year we're taking photos even better," said Federighi when he was back in office. The search for specific images is extended in iOS 12 by automatic assignments and corresponding suggestions (places, activities, objects, events, people, etc.). Search terms such as actions (surfing, sailing, hiking, riding) or the like are also included. The new "For You" tab shows highlights, suggests loops of live photos and the sharing of pictures.

Not only the sharing, but also the people to share with are displayed. If you follow the recommendation, pictures are automatically highlighted at the recipient who can be sent to the sharing party - this is useful if, for example, you were at the same event. All of this should be safe thanks to end-to-end encryption and local machine learning.

Not only can you take photos with the camera, but since last year you can also use Animojis. These seem so popular that four new ones have been added: Ghost, Koala, Tiger, and T-Rex. The audience at the keynote at the start of WWDC 2018 was much more enthusiastic about the so-called "Memojis". A memoji is an emoji that you can design yourself - so you can create a virtual face as an image of yourself and send it. Oh, by the way: Animojis and Memojis can now stick out their tongues: P

Siri is also getting an update that will surely seem more useful to many than Memojis. With "Shortcuts", self-selected commands can be combined with actions, locally as well as in the smart home and in all apps. For example, you can use drag and drop to set Siri not only to turn on the radio in the car when “I'm going home”, but also to turn on the heating / air conditioning at home. Messages can also be sent faster. Siri also suggests preconfigured messages from iOS 12, for example if you are late for an appointment.

With “Suggestions”, Siri should also benefit more from local machine learning - and so do the users. For example, if you always use a certain app at the same time, turn on the radio, order food or coffee somewhere or the like, the action will be suggested to you on the start screen after repeating it several times. The actions can then be carried out in a shorter way directly from there.

Group FaceTime is finally here - with up to 32 participants!

For a long time, not only developers, but also users wanted it to be possible to make video calls in FaceTime with more than one person. The video conference is possible on Apple devices via "Group FaceTime" under iOS 12. A group call with camera use can even be started for all participants directly from a group chat in Messages. Up to 32 actors are possible in Group FaceTime - they are displayed as thumbnails on a bar at the bottom of the screen. The last speakers appear large above; the biggest one who is currently speaking. You can also tap individual users to lock them in place.

Media literacy is a catchphrase that concerns not only children and young people, but also many adults. Apple also seems to know this and is offering new functions for monitoring and evaluating cell phone and tablet usage on the iPhone and iPad from iOS 12:

News on iOS 12 has new functions and Stocks, Apple's stock app, has also been revised. There are now graphs in it that show the value development of individual papers over the course of the day. In addition, news and apps are linked so that you can view relevant business news directly in stocks on the share or the stock exchange.

There is an update for Voice Memos that recorded memos and other voice snippets are now synchronized via iCloud and are therefore directly available on the iPad and Mac. “IBooks” becomes “Apple Books” and also offers new functions for reading books and listening to audiobooks. Car Play was also briefly mentioned, which has received a really important innovation: third-party navigation apps will also be permitted in the future.

Summary: this brings us iOS 12

Apple has once again worked hard on the mobile operating system for iPhone, iPad and iPod Touch. From autumn onwards, you can upgrade to better performance, grouped notifications, more augmented reality, expanded photo functions, new Animojis and the new Memojis as well as Group FaceTime, new Siri functions and options for curbing excessive use of the devices and others Bring improvements. What is your opinion on iOS 12? Are you looking forward to the new features or has Apple forgotten something very important? Feel free to leave a comment on the topic!