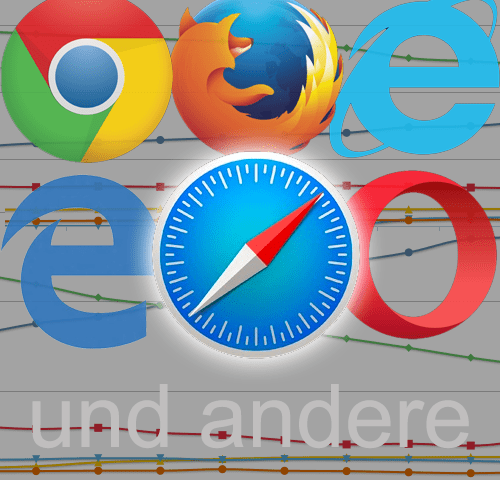 Browser for viewing Internet content are sometimes a bit of a controversy; which one has the best performance, which one works best with the operating system used, which one has the most / best extensions? Etc. I once researched a few figures on the current market shares of Internet browsers and reasons for the corresponding figures - and I don't want you to see the number of users of Sir-Apfelot.de withheld. Of course, these also have their reasons.

Currently the latest numbers are up NetMarketshare.com those that could be collected up to October 2016. Compared to the previous months, for example, the popular browser Firefox catch up a little and also Microsoft Edge is increasing in small steps in terms of the number of users. The biggest differences are in the old Microsoft browser, the Internet Explorer, and with the Google Browser Chrome noticeable. As early as March, Chrome overtook Internet Explorer, which was slowly becoming obsolete. In the overall picture, the number of users also decreases from Safari. All others fluctuate in their share, but have remained below 2% since June.

A clear change is emerging, at least in the browsers that are in vogue on PCs. Image Source: NetMarketshare.com (click to enlarge)

Browser user numbers can be seen in relation

Of course, it's worth taking a look Number of web browser users only if this is comparative. The pure distribution of percentages at a given point in time is less effective. Therefore, in the following I would like to compare the market shares from October 2015 with October 2016. To do this, you first get a graphic and then a corresponding table:

Microsoft's offer also contributed to the change in the number of Internet browser users; IE disappears while Edge doesn't offer much. Chrome is taking advantage of the moment. Image Source: NetMarketshare.com (click to enlarge)

Causes and reasons for constant change

There are many reasons for the redistribution of browser market shares. If we take a look at the two Microsoft browsers, one of them - namely Edge - didn't even exist until July last year; and the other should be sawn off successively. However, Chrome replaces Internet Explorer far more effectively, as you get significantly more plug-ins and add-ons for this browser. Edge, on the other hand, was only released for extensions in the middle of this year. At the beginning of November 2016 there were just 16 of them - and not even AdBlock is among them. Firefox, the former pioneer, can be personalized well, but the performance is not always right. Safari does so “badly” in the overview because there is no differentiation between PCs and Macs.

Which browsers do visitors to Sir-Apfelot.de use?

Let's look at a representative number of 45.000+ sessions on this blog that have built up in the past, then we can determine a good average. For example, you can see that Chrome and Firefox are doing well; and Chrome has the edge. 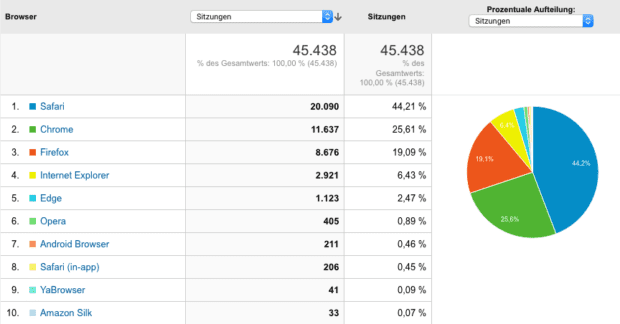 The largest share, namely 44,21% in total, falls on safari. This is not surprising as this page is an Apple blog. Who with Mac, MacBook, iPhone, iPad or another Apple device accesses it, it will most likely do so via Safari. On the other hand, I find the relatively large number of calls via Internet Explorer astonishing;)

Conclusion on Internet browsers and their number of users

If you just want to call up websites and do not want to personalize your browser and are not afraid of advertising and other hurdles, you probably use Edge or another browser that is not yet completely user-friendly. Apple fans are sure to count on Safari. Firefox and Chrome are very customizable and offer passable performances depending on the application. So it always depends on the use and the user - per se, no perfect browser can be identified for everyone. So despite all the possible disadvantages, I would like to highlight one last thing, for example Edge is the only browser with which you can access the Streams of Apple events can follow live ...