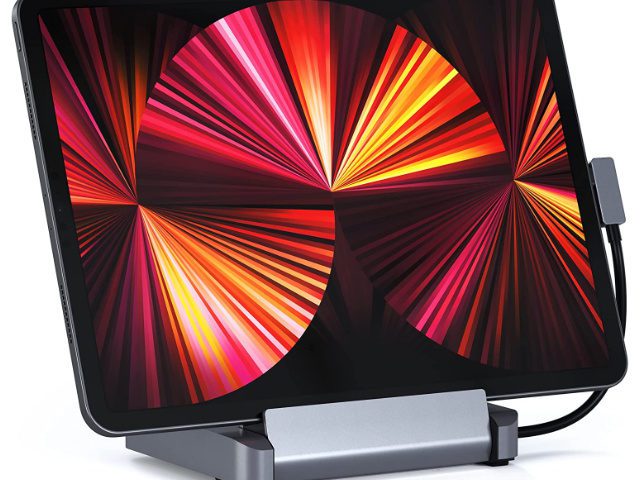 For the Apple iPad Pro with USB-C connection, Satechi has a really well-rated USB-C hub with various connections. In addition to a USB-C connection with Power Delivery for charging the battery with up to 60 watts, you get one HDMI, USB-A, audio output via 3,5 mm jack, SD reader and microSD reader on the dock. In addition to the iPad Pro, you can also use the gadget on the Apple laptops MacBook Pro and Macbook Air with Thunderbolt 3. In addition, it should work on devices from Microsoft, Samsung and Google. At Amazon you can order it with Prime Shipping.

This iPad Pro Dock from Satechi not only offers you 6 connections for various output devices and storage media - you can also use it on the MacBook Pro and MacBook Air in addition to the Apple tablet.

Satechi Stand & Hub made of aluminum for the Apple iPad Pro

Thanks to these accessories, you can elevate the Apple tablet and tilt it slightly backwards so that it is easier to use with a mouse and keyboard. In the base are the individual connections that can be used if you connect the hub to the iPad Pro with a USB-C cable. Particularly practical for mobile use: You can fold the frame to better transport it from one place of use to the next. Thanks to its compatibility with current models of the MacBook Pro and MacBook Air, it can also be used more extensively. 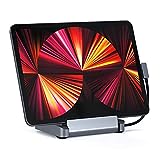 Cheaper alternatives BYEASY than 7-in-1 solutions

Back in June, I introduced you to two iPad Pro docks from BYEASY, each with seven connections. In addition to the same ones as mentioned above, there is also a second USB-A port. There is a dock where the iPad is roughly level with the ground. In the other model, it is raised and can also be inclined in different ways. Both models are cheaper than the Satechi model; they only cost around 60 euros. You can find more about the iPad Pro Docks from BYEASY and the links to the product pages with Prime Shipping from Amazon in this post from June.