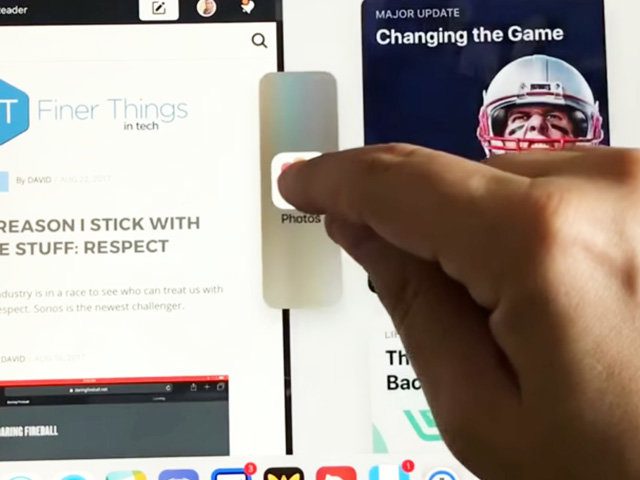 The mobile operating system Apple iOS 11 will be with the new iPhone 8 according to the upcoming September keynote also rolled out for the iPad (Pro) and brought there with the Dock (known from macOS), Split View, Slide Over and "One-Handed Multitasking" with some interesting new features. If you want to know in advance how you can use your workflow in the new iOS 11 for iPad can improve, then the corresponding short instructions from Apple and other great YouTube videos will help you. Do you want examples? Well, then I've summarized a few for you here.

The new functions and settings under iOS 11 on the Apple iPad (Pro) are explained to you in various YouTube videos. Here we have picked out two of you and linked a playlist with further explanations.

The new functions of the mobile Apple operating system for 2017 and 2018 are intended to increase the operation, multi-tasking and all in all the user-friendliness of the iPad. With the appropriate peripherals, such as an iPad keyboard, you have a replacement for Mac and MacBook - especially when traveling and on vacation. Also ideal for Travel blogger.

Here is a video from Curved that shows you not only the dock and features such as slide over and split video, but also other setting options and accessibility features in iOS 11 for the iPad:

Here is another video that mainly deals with "one-handed multitasking". So if you only have one hand (free) to operate the iPad, this will be much easier with iOS 11:

In order not to drag out this article unnecessarily and to increase the loading time with a lot of videos, I have put together a playlist with videos on iOS 11 for the iPad Pro on YouTube. This contains on the one hand the two advisory videos already contained in this article and on the other hand the clips published by Apple. These are as usual short and aesthetically structured. You come to the playlist with the video instructions for iOS 11 on the iPad with this link.

Apple iPad Pro mid 2017
The current iPad Pro is 10,5 inches in size, has 4GB of RAM, multi-touch and soon the new iOS 11 (as an update, will still be delivered with iOS 10). Order your new iPad Pro today and you will soon benefit from the great functions in the mobile Apple operating system iOS 11.
Buy it at Amazon Price includes VAT, plus shipping costs (updated: 14.09.2022 at 13: 56 clock)

1.004 Reviews
Logitech multi-device keyboard
Do you want to use the iPad, iPhone or another mobile device as a mobile Mac / PC? Then this USB and Bluetooth keyboard is ideal. You can pair it with Mac and PC, but also with iOS and Android devices. So you also have the opportunity to work on the move and be even more creative than just touch input. Top: a device holder is already integrated!
74,94 EUR
Buy it at Amazon Price includes VAT, plus shipping costs (updated: 14.09.2022 at 13: 56 clock)
-