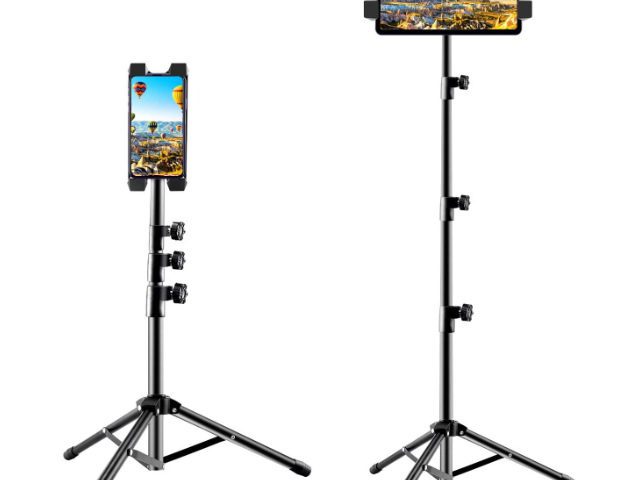 With an iPad tripod it is possible to mount the Apple tablet at different heights. This can be necessary if it is to be used for photos or videos. But it can also be useful for a video conference to install the iPad at eye level and in a straight line. Last but not least, Apple iPads can also be used for exhibitions or as information screens. In the following you will find various examples of iPad tripods and tripod heads that can be screwed onto an existing tripod and into which the iPad or iPhone is clamped. Do you have other favorites than those shown below? Feel free to leave a comment :)

iPad tripod: With a tablet tripod or tablet tripod head you can set up the Apple iPad, among other things. The iPad can then be used for photography, video recordings, video conferences, as an info screen and more.

If you look for iPad tripods, you will find a wide variety of models and designs. Some are suitable as iPad stands for placing the tablet on the tabletop. Proper tripods, which are similar to those for cameras, offer three legs and a clamping mechanism for the iPad - and sometimes also for the iPhone. So if you want to use both devices on one tripod, then these models are definitely something for you. In the following I have included an Amazon bestseller list for iPad tripods for you. This updates itself automatically, so that in a few months or years this post will not only consist of links leading into the void.

Two months ago I introduced you to a smartphone tripod head with which you can attach various smartphones to an existing camera tripod. Here you can find all information and the link to the product page: Smartphone tripod head with best reviews and discount. But there is also one and the other iPad tripod head, in which you can clamp tablets and then attach them to a camera tripod. For this purpose, these tripod heads have a corresponding quarter-inch thread that fits onto tripod screws. Here's another bestseller list from Amazon that updates itself: