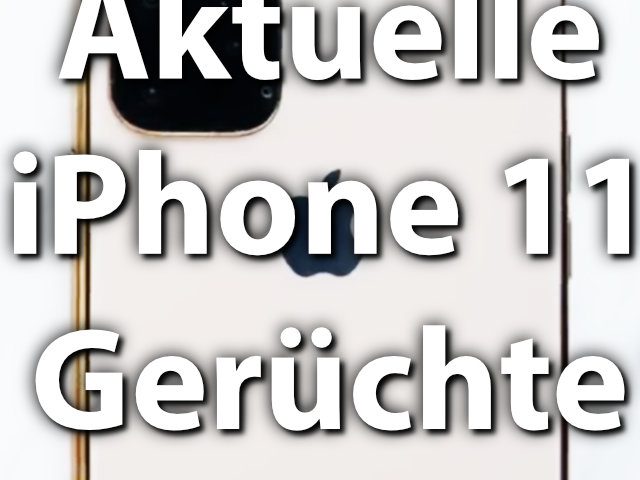 In September 2019, Apple will again hold a keynote, which iPhone fans in particular are looking forward to. Because in addition to the in June at the WWDC19 keynote announced operating systems and perhaps other hardware such as Apple Watch, MacBook, iPad and Mac, there will be new Apple smartphones again. The rumor about the name is known: Apple iPhone 11. But the Apple iPhone 11 rumors go even further: appearance, technical data, price, release date and much more. In the following I have summarized the current assumptions, analyzes and assumptions about the upcoming smartphone from Cupertino.

Apple iPhone 11 rumors - current reports and analyzes of the iPhone XI indicate a new camera, a better battery and new touch features. Details and forecasts for 2019 and 2020 can be found here!

In total there should be three new iPhones again in autumn 2019; the models iPhone XI or 11, iPhone XI Max or 11 Max and iPhone XI R or 11R. The official model names have of course not yet been determined - when it comes to analyzes, assumptions and rumors about the new iPhone 11, this name is often used due to the consecutive numbering (with the omission of 9, whereby for some the XR represents the iPhone 9) .

Anyway, no miracles are expected from Apple this year, not even all-too-sensational innovations. With regard to the camera, there will probably be a triple camera in the two more expensive models, and a duo camera in the budget model (each on the back). The notch on the front should remain, which indicates the retention of Face ID. All in all, no big design changes, no big surprises.

Rumors about the iPhone 11 camera

For the camera or the cameras of the new iPhones, the assumption is that the individual lenses and the LED flash will be placed in a square bump (protruding part). It almost looks like there's an Apple Watch display on the back of the smartphone. Otherwise, the design will remain with the predecessors X, XS, XR and Co. The triple iPhone camera could be a standard, a telephoto and a wide angle lens. Photos and videos (up to 4K) with it would certainly be impressive.

Accordingly, some innovations are to be expected in iOS 13 for the camera app as well as for recording modes and for post-processing. Apple had at the Introducing iOS 13 in June already announced new features for video editing on the iPhone. The new features of the Apple iPhone 11 will continue to be played primarily “under the hood”. A new A13 chip, maybe a more powerful battery (also for Apple Arcade) and so on.

With the new iPhone models this year there will be no technical revolution, no overwhelming wow factor and nothing really trend-setting for the industry. The changes, adjustments and innovations in hardware and software will only justify a preference for this phone over its predecessor when buying a new one. So far, there are rumors that have persisted:

Compare with iPhone 3GS and iPhone 4

Some people who are concerned with the upcoming iPhone generations compare the models for 2019 and 2020 with the iPhone 3GS from 2009 and the iPhone 4 in 2010. Now, ten years later, the upcoming iPhone 11 should be the last of its kind again before Apple comes along with numerous new features and USPs next year. Because some of the points mentioned above (120 Hz display, Apple Pencil support, USB-C) may not come until 2020. Details can be found in this video, among others:

The date for the iPhone 11 release can already be determined by rumor and alleged leak. Because how at this point is shown in Japanese and English, the sale of the new iPhone is expected to start on September 20, 2019. This is a Friday, which fits in well with Apple's sales concept for the last generation of iPhones. The smartphones can usually be pre-ordered a week in advance; that would be Friday, September 13th, 2019. The September keynote could therefore take place on Monday or Tuesday, i.e. on September 9th or 10th. Wednesday is excluded because of 9/11.

Rumor about the Apple iPhone 11 price

How many dollars or euros should the new iPhone models cost? There are various assumptions and rumors about this. How the price is designed, especially among the three models, will again depend on the camera and the internal memory. It is speculated that the iPhone 11 will start at $ 999 and 999 euros, respectively. The iPhone 11 Max is correspondingly more expensive because it has a larger display and housing. The iPhone 11R could even start at $ 749 or around 750 euros. We won't find out what the official iPhone 11 price will be in euros until next month.

The new iPhones won't usher in a new age in terms of design, display, and many of the iOS features. The new iPhone models will "only" show a camera update, some changes in the features, better overall performance and perhaps a more powerful battery. Everything else will show in September 2019 when the new models are presented at the iPhone keynote. What do you all mean? Have I forgotten something? Feel free to leave a comment on the topic!