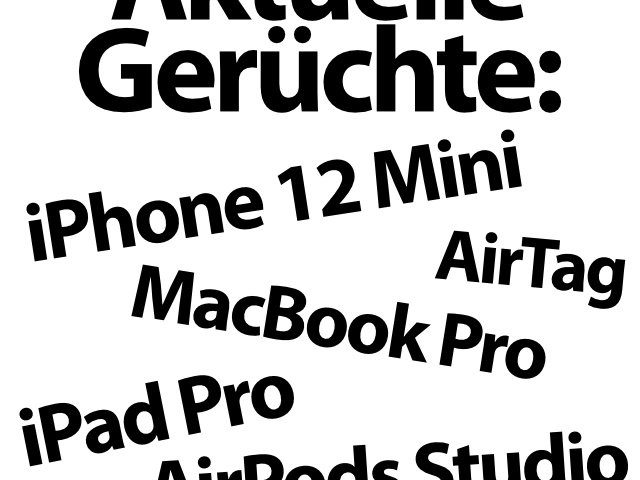 On September 15 took place the annual September keynote instead of Apple, only without an iPhone. Now there are rumors about the upcoming Apple timeline, the products to be expected and their specs. In this post you will find the latest speculations, leaks and speculations. These come from leak accounts on Twitter, MacRumors and other sources, among other things. I have linked them to the individual contents.

What will Tim Cook and his team introduce to us in October and November 2020? Probably the iPhone 12, AirTag, AirPods Studio, HomePod Mini, new models of MacBook Pro and iPad Pro and a lot more.

iPhone 12: four models to be released on October 13th?

An “iPhone 12 Mini” is currently being discussed, which could be the model with a 5,4-inch display. Both the iPhone 12 and its Pro version should have a 6,1-inch display. The screen diagonal of the iPhone 12 Pro Max should measure 6,7 inches. As in the previously presented 4th generation iPad Air An A14 Bionic Chip will probably also be built into the new smartphones. A lot more seems to be since week 21 to be established.

Like MacRumors here. with reference to a Tweet reported by Jon Prosser, but the storage capacities should differ from the previous reports. So there should be the following selection of internal memory for the individual models:

In addition, Prosser writes: "Event on October 13th, as I mentioned earlier“(Freely translated). Apple has not yet confirmed the date for the October 2020 event. However, many consider it safe. Just like the rest of the line-up (see below).

With regard to the technical data of the iPhone 12 Pro Max, there is also speculation about the camera sensor, for example under this tweet by Max Weinbach. Among other things, it is claimed that the sensor should be 10% larger and that image stabilization should be implemented via the sensor.

More products in the Apple timeline for "late 2020"

It says in one Tweet of the Twitter account Komiya that the new iPhones as well as the tracking accessories called AirTag will be presented at the October event. The AirPods Studio will also be presented in October, but only by press release.

A new MacBook, a MacBook Pro and an iPad Pro can then be expected as part of a separate November event. As an addition was added in the thread: "HomePod Mini could be in the October event, but I'm not sure“(Freely translated).

Due to the coronavirus pandemic, the Summer Olympics planned for 2020 had to be postponed to 2021. The sports competition in Tokyo should, if you can trust the leaks from @ L0vetodream on Twitter, be accompanied by Apple with country-specific wristbands for the Apple Watch. Here do you see the tape for Japan; here. that for Denmark.

Summary of the rumors for the Apple timeline