Last week Apple did presented the four new iPhone models. A charger or power supply unit is not included with any of these. If you want to buy an iPhone 13 and don't own a suitable charger with a USB-C connection, then you will find the right selection here. You can buy the examples shown on Amazon with Prime Shipping so that they can get to your home quickly.

The Apple iPhone 13 and iPhone 13 Pro are delivered without a power supply unit. Here you will find USB-C charger recommendations with up to 100 watts of power. You can also use this charger with the iPad, MacBook Pro / Air and other devices.

Both that iPhone 13 (mini) as well as that iPhone 13 Pro (Max) just bring a USB-C to Lightning cable and short, printed instructions. In order to charge the battery of Apple smartphones, a charger must already be available - or you have to buy one. Of course, Apple offers its own solution for everyone who does not yet have a USB-C power supply. The Apple USB-C Power Adapter with 20W power costs at Amazon currently 19,76 euros instead of 25,00 euros. It is suitable for using the quick charge function that has been around since the iPhone 8 and iPhone X. You can use it to charge the 13 series by up to 30% within 50 minutes.

Charger for iPhone, iPad and Co.

If you want to charge several devices with your new charger, then of course a multi-port power supply is the right choice. An example would be the UGREEN 70774, which not only offers 65W power, but also three USB-C and one USB-A ports. With it you can charge the iPhone, the iPad, the camera, the flashlight and much more at the same time. The charger is equipped with Power Delivery 3.0, Quick Charge 4.0+ and other standards. You can of course also use it for Android smartphones and tablets. Besides, it is compatible with the MacBook Air and MacBook Pro. There is currently a 5 euro discount voucher on the product page. 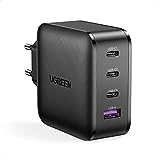 But maybe you're looking for an even more powerful power adapter to power the MacBook and charge both the iPhone 13 and the iPad, iPad mini, iPad Air or iPad Pro at the same time. A good choice here would be a 100W power supply - for example the UGREEN 40747. This also offers three USB-C and one USB-A port. Fast charging is possible via Power Delivery and Quick Charge. In addition, as with the previous chargers for iPhone 13 and Co., the individual devices only use as much power as they need. So you don't have to worry that “too much” electrical energy will be smuggled in and something will be damaged. 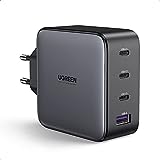 Chargers from Anker: Good power supplies with up to 65 watts

I would have liked to recommend a few more manufacturers to you, but for some this is no longer possible. Because although I personally have had very good experiences with AUKEY chargers (as well as with other devices), this manufacturer has flown from the Amazon site. If you want to look around the current range of well-known and unknown manufacturers, then I recommend the following Amazon bestseller list for USB-C chargers with 100W power. This updates itself automatically and always shows the currently best-selling and best-rated copies.