iPhone 7 (Plus) waterproof and dust-resistant according to IP67 - what does that mean? 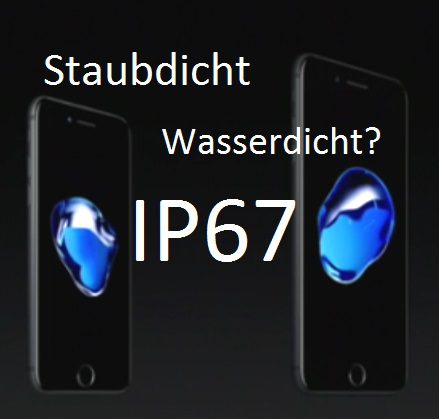 On yesterday's Apple Keynote, on which, among other things, the iPhone 7 and the iPhone 7 Plus were presented, it was said that the new Apple smartphones according to IP67 water and dust resistant are. But what does this combination of characters mean; What "protection class" is this? In this little article I would like to briefly explain to you what is behind IP67 or the IEC standard 60529. First of all: the new iPhone 7 is not an underwater camera!

Protection classes such as IP67 indicate protection against foreign bodies

At Wikipedia you can find another, and better, explanation: "The degree of protection indicates the suitability of electrical equipment (for example devices, lights and installation material) for various environmental conditions, and also the protection of people against potential hazards when using them. " (Source)

The IEC standard 60529 or DIN EN 60529 describes the Degree of protection through housing. The iPhone 7 and the iPhone 7 Plus are so characterized by their special housings water-repellent and less susceptible to dust. The special nomenclature of the protection class (IP67) indicates the degree of protection. If the first code number were 6 instead of 0, then there would be no protection at all. The 6, however, is the highest value and means "dustproof".

iPhone 7 and iPhone 7 Plus: IP67 degree of protection disassembled

The iPhone 7 and iPhone 7 Plus are dustproof and water-resistant according to IP67. But what does that actually mean?

In a nutshell, IP 67 can be broken down as follows:

In principle, the heading is wrong here, because it is not "waterproof" in the "technical" sense, but rather "water-resistant". So it doesn't mean that you should go underwater with it for a long time. But the typical fall into the toilet, which has already cost many smartphone lives, should now be easily put away by the iPhone 7.

What does "water-resistant" mean in practice?

In everyday life that means that a Fall into the pool (as given as an example on Apple's keynote) should not be a problem, the iPhone is quickly rescued from the water. Splashing water shouldn't be a problem for the iPhone 7 and iPhone 7 Plus at all. Also one Depth charge, as in this video, shouldn't harm the new Apple smartphones:

The new iPhone cannot be used as an underwater camera. For this, the second code would have to be at least an 8; but better still a 9, which means "protection against water at high pressure". However, the new models from Apple are now a bit better and safer in everyday life - this was certainly also achieved by omitting the jack connection on the iPhone 7 (Plus) ... a step that I welcomed very much anyway. ;)