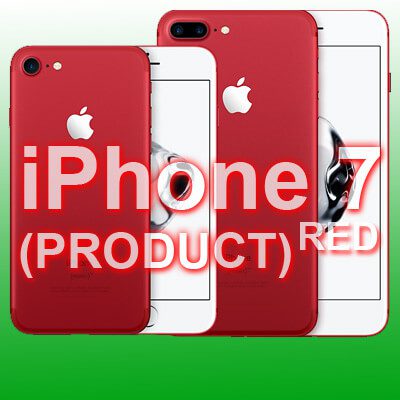 The iPhone 7 and iPhone 7 Plus will be available from today Red Nose Day 2017 in the special (PRODUCT)RED ™ Edition in red. Apple donates part of the proceeds from the sale of the red iPhone 7 models to the Global Fund to support HIV / AIDS programs. There are no other significant changes besides the new color. The iPhone 7 models have the same features as the regular editions and cost just as much.

In addition to other products and Apple accessories, the current flagship is now also available Cupertino in red. On the specially set up for the RED partnership Information page Apple says about the red product range:

"We have been supporting HIV / AIDS programs with our (RED) partnership for 10 years. They provide advice, tests and, most importantly, medication to prevent HIV from being transmitted from a mother to her unborn child. So far we have more than 130 million US dollars from sales of our (RED) productsDollars collected. Now flet's run the iPhone 7 (PRODUCT) RED™ Special Edition. Every purchase takes us one step closer to a generation without AIDSmore like."

Starting today, Friday, March 24, 2017, 16:00 p.m. Central European Time, you can order the red iPhone 7 models from Apple or buy them in the store. Technical data of the devices can be found in the article on Keynote 2016. These are the current prices:

The website of the Apple Online Store with the Special Edition iPhone 7 models you can find here.

In addition to the new features of the iPhone 7 / Plus, there is also something new to discover with the iPhone SE and the iPad (entry-level model with 9,7 inch display). Because with the SE smartphone from Apple you now get double the memory for the same price; the iPhone Air 2 has been completely overhauled and is now simply available as an iPad with new specs. You can find details on this in the corresponding Yesterday's article.