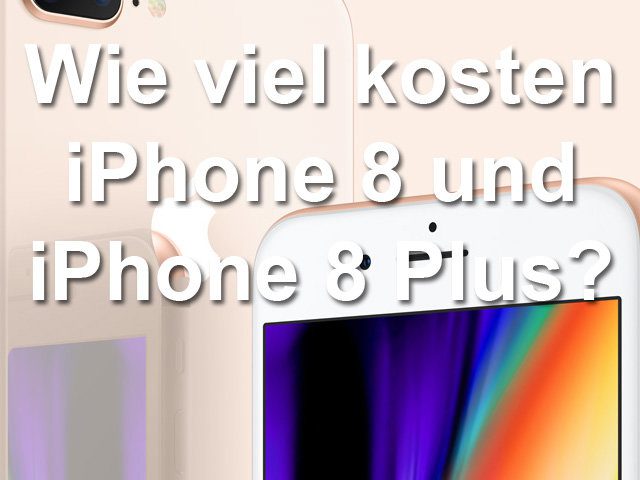 In addition to the “One More Thing” for 2017, the Apple iPhone X, there was also that at this year's September keynote, which took place for the first time in the new Steve Jobs Theater iPhone 8 and I baked the 8 iPhone Plus to marvel at. In addition to technical details that I told you yesterday in the Keynote summary you will want to know very quickly how much the iPhone 8 and iPhone 8 Plus cost. What is the price for the new Apple smartphones? I'll tell you in this post;) For comparison, I've also included prices from other models ...

How much do iPhone 8 and iPhone 8 Plus cost? What is the price for the new Apple smartphone models? You can get answers and a comparison here!

iPhone 8 (Plus) price: this is how much the smartphones cost

The new “regular” Apple smartphones, the iPhone 8 and the iPhone 8 Plus, do not significantly break the previous price range for cell phones from Cupertino. The iPhone X is significantly more expensive in comparison with its two memory versions. But this is also due to the new technology that is in it and the 5,8 '' OLED Super Retina display. Without making a long preamble, I would now like to focus on the iPhone 8 and iPhone 8 Plus models. Their prices are as follows:

Price comparison with other models from Apple and Samsung

If you want to classify the costs for the new Apple smartphones in the current environment of the high-end devices on the market, then you've come to the right place. For a complete overview, I have put the prices of the iPhone 8 models and other current iPhones in addition to the competition from Samsung in an overview:

I have already linked the summary of the Apple September Keynote 2017 above. There you will find further data and technical details about the iPhone 8 and iPhone 8 Plus, along with the price and information about the iPhone X, Apple Watch Series 3, Apple TV 4K and so on. If you want to read more about the new Apple iPhones, look at pictures, data sheets and so on, or want to pre-order them, then you can of course do so at Apple.com do.

By the way: You can pre-order the Apple iPhone 8 and Apple iPhone 8 Plus from this Friday, September 15, 2017. The new smartphones from Cupertino will then be delivered from September 22, 2017. The iPhone X, however, can only be ordered from October , Deliveries will go out from the beginning of November.