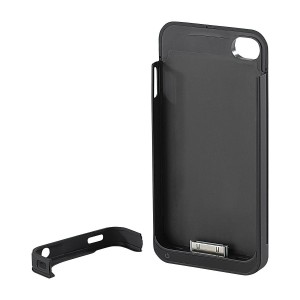 The idea is as simple as it is ingenious: you simply connect an iPhone protective cover to an additional battery, which ensures longer runtime when you are on standby or surfing. But as always, there are some who tackle the problem and few have a very good solution. The Callstel cover did its job so well that it even received an award on Apfeltouch.net. But now first to the technical details, which are not unimportant with an additional battery: The protective cover is equipped with a battery that delivers 1.400 mAh. According to the manufacturer, an iPhone 4 / 4s (and this is the only case that "fits"!) Can be used in standby for up to 240 hours or you can make calls for up to 5 hours longer. Impressive numbers, in my opinion. The protective cover also has an on / off switch that can be used to activate and deactivate the power bank. 4 LEDs, which are built into the case, provide information about the charge status of the reserve battery.

An additional feature is the small folding foot that can be folded out on the back of the iPhone case. This means that the iPhone is perfectly positioned horizontally on the surface and you can, for example, watch films in landscape format. I couldn't find out whether the small base also offers enough stability for portrait mode.

In the Customer ratings on Amazon the battery protective cover comes off well - with almost exclusively 5 stars, customers rate the functionality and the appearance of the cover very well. According to a customer statement, the battery is enough to recharge a completely discharged iPhone 4 / 4s to 85%. Another reported a full charge (100%) with the battery. So you can assume that it is somewhere in between when you buy this battery cover.

Customers also positively rate that the appearance of the case is quite high-quality and is based on the iPhone design. This makes the iPhone appear thicker than normal, but you can't see a power bank in the case. The micro-USB port alone, through which the additional battery is charged, suggests that it is more than just a "thick" case.

Incidentally, the statement in an evaluation that you have to charge the power bank and iPhone separately is not correct. When you hang the battery with the iPhone on the charging cable, the iPhone is first charged and then the additional battery in the Callstel cover.

If you want to get the protective cover, you can order on Amazon. But it should be pointed out again that it is NOT compatible with the iPhone 5. Here you will have to wait a little longer until the manufacturer has finished the version with the Lightning connector.