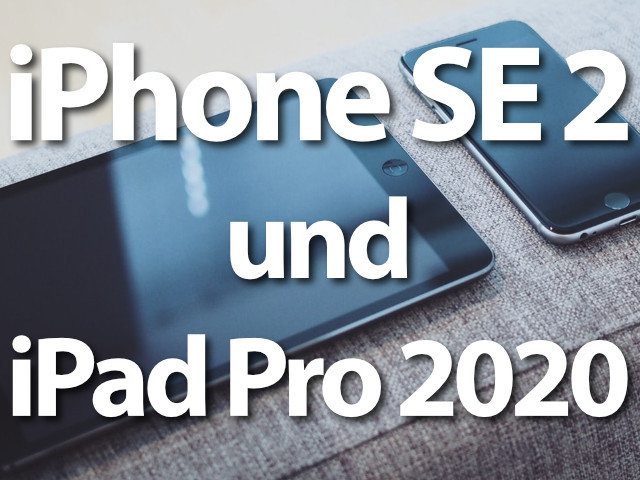 The rumors of a new budget iPhone and an iPad Pro with a 3D sensor have intensified more and more in the last few weeks and months. At the moment, more and more reports and predictions about these devices are appearing again, including from industry professionals Ming-Chi Kuo. His Apple product announcements often hit the bull's eye, so it's worth taking a close look at. In this post I have therefore summarized the latest information, rumors and leaks about the iPhone SE 2 and the iPad Pro with two cameras and a 3D sensor. These two devices could hit the market in the first or second quarter of 2020.

The iPhone SE 2 or 9 with 4,7 inch display, A13 chip and Touch ID could appear in early 2020. The same goes for the new iPad Pro with 2 rear cameras and a 3D sensor with time-of-flight technology. Most of the rumors come from Ming-Chi Kuo and Mark Gurman.

As I said, the following data is based on rumors, leaks and analyzes by Apple expert Ming-Chi Kuo. The IT analyst has good contacts in the supply chain of the manufacturers behind the Apple devices. Therefore you can give his information, which is a.o. TechRadar and MacRumors are listed, trust to a certain extent.

The following information could therefore be the technical data of the "iPhone SE 2" (maybe also "iPhone 9" or another name):

New budget iPhone should be reminiscent of iPhone 8

The budget iPhone that may appear in March 2020, the name of which will probably no longer have anything to do with SE, should be optically based on the iPhone 8. In addition, some hardware decisions on this device were made less for its modernity and more for a cheaper price. Touch ID instead of Face ID, only up to 128 GB of memory, no 3D Touch, a reduced number of cameras and so on - all those who update from the old SE, 6 or 6s to a new iPhone with the latest chip should be addressed here want. And that for not too much money.

It has not yet been said whether there will be major changes in terms of the display, unlocking (Face ID?) Or other features on the front of the device. However, the iPad Pro, which should also come on the market in early 2020, should have two cameras on the back instead of just one. In addition, a 3D sensor is to be installed that can measure distances using time-of-flight technology (TOF) and thus scan objects in three dimensions. More information about TOF cameras is available at Wikipedia ;)

The new optical systems could serve to better implement augmented reality apps and AR tools. In addition to the statements made by Kuo in an investigation paper by TF International Securities, this also emerges from the statements made by Mark Gurman at Bloomberg. In the corresponding post that you here AR headsets and glasses are also mentioned, which are due to hit the market in 2022 and 2023. So everything points to a completely new range of products, which will be ushered in from next year via the "old" types of equipment.

All iPhone users who are attached to their small but now quite old devices can get a new alternative with the new iPhone SE 2 (or iPhone 9?). If you have more money left over and also enjoy AR applications, you can look forward to the iPad Pro 2020. This means that applications that run on the AR headset / AR glasses can possibly be tested and developed in the next few years. It will be exciting in the next few months for both everyday users and tech freaks;)