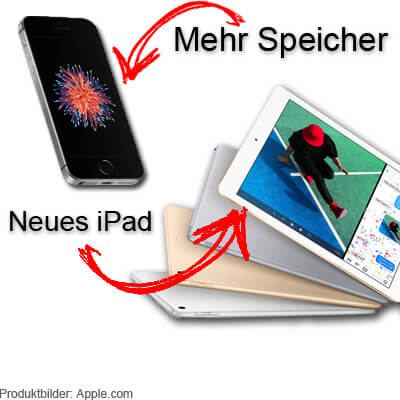 Apple is now offering the iPhone SE with twice the storage space, but at the previous price; and the entry-level model for tablets, the iPad Air 2, has been completely overhauled once and is now offered simply as the “iPad”. I have summarized the details, important technical data and prices for you.

iPhone SE with double memory and new iPad with A9 processor - the new Apple offers from March 24, 2017.

iPhone SE: double the storage for the same price

The Apple iPhone SE comes with a 4 inch retina display, a fast A9 chip and a 12 megapixel camera on the back. The M9 coprocessor ensures fast sensors and therefore unique operation - at least if you don't want to operate the old-fashioned way by typing. Movements, acceleration, GPS, Siri: everything is possible, everything can be measured. With the camera, recordings are also in 4K resolution possible; these can also be edited directly on the iPhone SE. Basically, as Apple fans, you have known the smartphone for a long time, it's not new. Only the now doubled memory makes the phone more attractive (can be ordered from March 24, 2017, 16 p.m.):

The new tablet from Apple, simply called iPad, has a 9,7 inch retina display, an A9 chip, iOS 10, a Touch ID fingerprint sensor, an 8 megapixel camera and an HD Facetime camera, and up to 10 hours of battery life many more great specs. By the way, up to 866 Mbit / s can be downloaded via WLAN connections for streaming films and other web applications. With LTE it is up to 150 Mbit / s. You can also find details about the new iPad on the Apple website. Here, too, the release is on March 24, 2017, at 16:00 p.m.:

What do you think of the revised models of iPhone and iPad? Is the impulse to buy these Apple devices now greater on your part? Feel free to leave a comment on the topic :)