Instead of iPod Nano and Shuffle: iPod Touch and HomePod in the Apple Shop 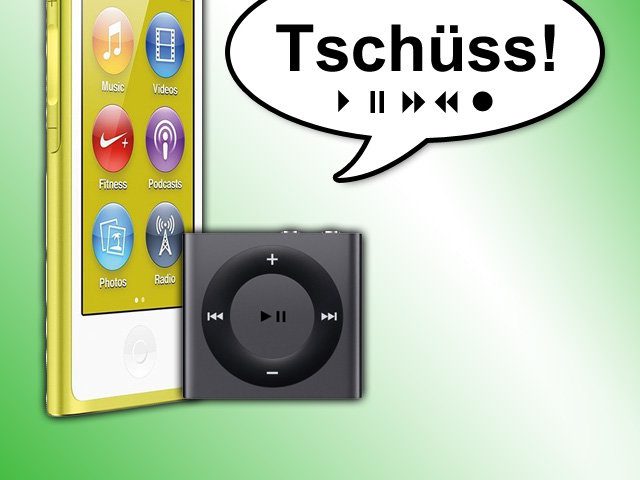 Apple has said goodbye to the iPod Nano and the iPod Shuffle in its online shop. You can no longer buy the two iPod devices via the official Apple website. The iPod Touch remains the only model in this line of products; Apple continues to focus on the presentation of newer items such as the HomePod and music accessories (EarPods, AirPods, etc.). Here is some current information on Apple's music offering.

The iPod Touch is still effectively advertised in the Apple Store. iPod Shuffle and iPod Nano have been withdrawn from the range. The future belongs to AirPods, HomePod and Co. (Image source: apple.com)

Apple says goodbye to the Nano and Shuffle iPod models. Recently, the technology giant made Cupertino the two models taken from its official website. As opposite 9to5mac.com has been confirmed, the products will not be further developed and will probably soon be withdrawn from Apple's own trade. Remaining stock in electronics stores and at Amazon as well as used copies from the corresponding sources are of course still available.

7th generation nano model in yellow
The Apple iPod Nano with 16GB storage in yellow. Also available in blue, green. Silver, space gray and purple. Thanks to Bluetooth, it can also be used with Bluetooth headphones and Bluetooth speakers. Tests on different speakers can be found here in the blog!
Buy it at Amazon Price includes VAT, plus shipping costs (updated: 16.09.2022 at 22: 06 clock)

Shuffle model with 2GB storage
Plenty of space for songs and up to 15 hours of battery life. Simple operation and VoiceOver function, which names artist, song title and playlist at the push of a button. Optimally compatible with iTunes.
Buy it at Amazon Price includes VAT, plus shipping costs (updated: 16.09.2022 at 22: 06 clock)

The 6th generation iPod Touch with an A8 chip, M8 motion coprocessor and the Metal interface for developers who want to bring graphically demanding apps to the iPod Touch is also currently available in the digital Apple Store and in official stores. Most of the advantages of iOS (apart from telephony and mobile Internet) can be used with the device: music, films and series from iTunes, apps and games from the App Store, videos and photos with an 8 megapixel iSight camera (up to 120 fps at 720p) and much more. Messenger can also be used via WLAN.

Touch model with 32GB memory
The Apple iPod Touch with 32 for lots of music, films and series, photos, videos, apps and games. Mobile entertainment system based on the latest Apple technology. With iOS, camera, WiFi and more.
Buy it at Amazon Price includes VAT, plus shipping costs (updated: 16.09.2022 at 22: 06 clock)

On the German version of apple.com you can't find the HomePod yet. The English version of the Apple website has been (for a long time) such an information page here. There you will find all currently available information about the new loudspeaker from Apple, the Siri, deep learning, the supposedly best sound experience in rooms and many other advantages.

Adaptation of the audio output to the room structure with the Apple speaker, which will be (partially) available from autumn. (Image source: apple.com)

On both the English and German websites, Apple also offers a selection of speakers and headphones in the Music category. Of course, this also includes them Apple AirPodswhich were ridiculed after their launch and are now being celebrated by users. The two models of the Bose SoundLink Revolve.

Music in the Apple universe

Who is a bit with the Story of Apple und mit Steve Jobs in particular, he quickly realizes that music has always been an important topic at Apple. The link between acoustic art and the Cupertino company has probably reached its climax in the form of the iTunes service.

In combination with the iPod and mobile devices such as the iPhone and iPad, Apple wanted to make music always available and "tangible" for its customers; or at least accessible with a few finger gestures. Not least with the AirPods and the HomePod, Apple shows that music still seems to be a big topic in the company even after Steve Jobs. Even if 2017 means: Goodbye iPod Shuffle and iPod Nano!