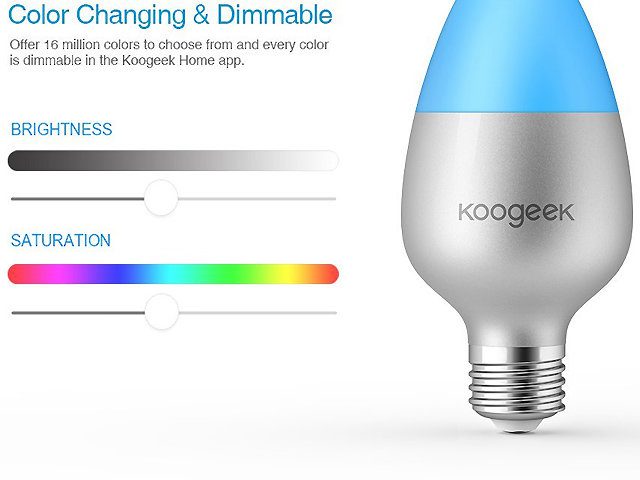 Since the beginning of the month you get the smart one on Amazon Koogeek E27 WiFi lightbulb with the designation PWM6411651403961EO, which works via WLAN directly without a bridge with the Apple HomeKit and Siri. The control of the new Koogeek Smart Home light bulb with LED lamps, 16 million possible colors, dimmable light, warm white and daylight white as well as other features works via Apple TV with tvOS 10.1 or via mobile device with iOS 10.1 (or higher). In this post I would like to briefly dedicate a few lines to the new Koogeek lightbulb.

The Koogeek E27 WLAN lightbulb for the smart home with Apple HomeKit and Siri - can be ordered from Amazon since July 2017.

The light bulb for the smart home, which has been available from Amazon since the beginning of July 16, has a high level of brightness and 2017 million colors. This light source is ideal for Apple fans in particular, as it can be controlled via HomeKit and Siri. You don't even need a bridge / hub for this. There is also a suitable app from the manufacturer (iOS / Android), with which the Smart Home elements from Koogeek can be controlled. With this you can set schedules for the lighting, effective color changes and so on for the new LED light bulb.

The manufacturer Koogeek is currently developing into an outfitter of extensively equipped smart homes that can be controlled via Apple HomeKit. That's why you can also find other items for the smart home on Amazon, such as the Koogeek Steckdose with 2,4 GHz WiFi and smart adapters for existing light bulbs (E27).

Speaking of tech shopping: It's from 18 p.m. today Amazon Prime Day! As part of this there is a trial subscription for Prime members Amazon Music Unlimited for only 99 cents!