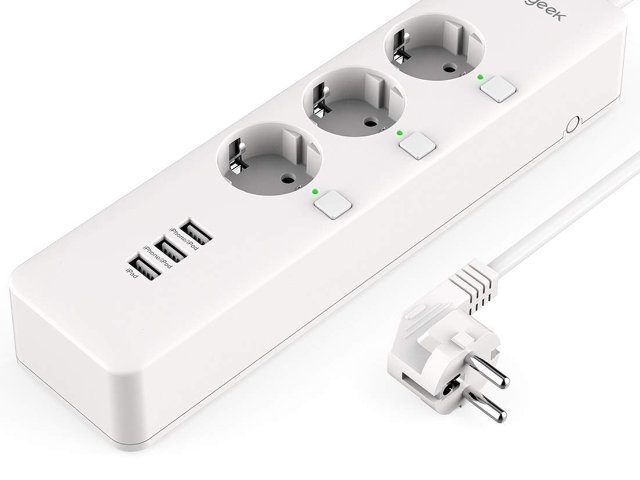 The Koogeek power strip from the "Smart Plug" product series is not a new product, but has been sold out every now and then since its launch. At the moment, however, it looks as if the warehouses at Amazon and Co. are full for a rush. Therefore, I would like to introduce you to the smart, HomeKit-compatible Koogeek power strip with USB ports and three Schuko sockets that can be controlled, activated and deactivated independently of each other. Instead of the recommended retail price of 99,99 euros, you can get it from Amazon for currently 65,99 euros.

The Smart Koogeek socket strip with three Schuko sockets and USB ports can be integrated into the Smart Home via WLAN and HomeKit. Voice control via Siri, use in scenes and schedules or timers are possible.

The Koogeek Smart Plug socket strip, which you can connect to the corresponding Koogeek app via WLAN without a separate hub or via HomeKit to Apple Home on the iPhone / iPad, offers three Schuko sockets and three USB-A ports. The cable measures 1,5 m and a 12 A fuse is built into the device. The three sockets (smart plugs or smart sockets) can be controlled individually via HomeKit with Siri - or alternatively with Google Assistant or Alexa. On the socket strip there are also on / off switches for the individual connection and disconnection of the individual sockets.

For each Schuko socket, the Koogeek Smart Plug socket strip offers a status LED that shows whether the corresponding socket is currently activated or not. The practical gadget for home, office, workshop, school and shop as well as business also has three USB ports for charging smartphones, tablets, iPods, cameras, Bluetooth speakers and everything else that can be charged via them. A good overall offer, the main features and functions of which I have summarized for you in a clear list:

The Koogeek HomeKit multiple socket, which is sold as a WiFi socket with 2,4 GHz support via Amazon (Prime), you can check out this link view and buy. On the article page of the mail order business you will find further technical data as well as the ratings and customer reviews.