An external fan for the mobile computer, a so-called laptop cooler or notebook cooler pad, is useful if the device often heats up noticeably. This is the case, especially in summer, in a heated apartment, in a warm office and when used on a bed or couch - almost always. I carried out a laptop cooler test for you and compared the CPU temperatures of an Apple MacBook Pro and a Windows laptop with and without a cooler. My conclusion with regard to the framework conditions can be found below.

The MacBook Pro on the AUKEY CP-R2 with four fans, two USB ports and a controller for the fan.

For the test I used the AUKEY CP-R2 laptop cooler; When using it, I tried to exhaust the devices used and thus to provoke the highest possible temperatures in the main processor (CPU). I compared the measured data with the values ​​of the CPU measurement without a laptop cooler (the computer was on a wooden table top). The data comparison took place with an Apple MacBook Pro (Mid 2012) and a Lenovo G550, which I have been using since 2010.

The notebook cooler / laptop cooler from AUKEY has four fans that are supplied with electricity via USB directly from the computer. For this, the device itself offers a second USB port, so that effectively no slot is lost. The four fans can be switched on and off individually; In addition, the performance can be regulated. The frame can be tilted (feet on the underside) - and on the other hand, the laptop can also be set up with a stand function, which is ideal for working on the desk and with an external keyboard.

Back of the laptop cooler test: ventilation is running, blue LEDs light up and the notebook is cool;)

Previews to the test

In the following I have listed a few points that could be important in the run-up to the data presentation. When using a cooler for the notebook and the associated assessment of the device, particular attention should be paid to the room or ambient temperature. But without further preamble, here are my comments:

The experimental setup is very simple: I first put the Apple MacBook Pro / Lenovo notebook on the desk with a wooden board (low thermal conductivity) and ran a lot of processes under macOS 10.13 or Windows 10 at the same time. After logging in, after apparently reaching the maximum temperature (usually after around 12 minutes) as well as after two minutes and after five minutes after closing all programs / processes, I saw the CPU temperature. I did the same thing again with both computers on the AUKEY laptop cooler with metal grid (high thermal conductivity).

Since I equipped the two computers with different software and designed them for different tasks, different programs and processes were used to push them to their limits and thus to high temperatures in the CPU. Here are a few examples - keep in mind that this enumeration of simultaneous processes may be a tired joke for many computers today; But I have tested with "old" devices:

Data on the Apple MacBook Pro used and the system in the laptop cooler test.

Technical data and details of the Lenovo laptop with Windows 10 used.

Programs for measuring the CPU temperature

There are apps for Mac OS X / macOS as well as Windows in its various versions with which you can read the load on the system, the processors, hard drives, the graphics card and the like. A standard value when reading out such data is also the CPU temperature. An app for the menu bar of macOS is simply called "System Monitor". You can download the demo version free of charge from the developer: bresink.com - the full version is available in the App Store:

For Windows, I can recommend the free “Core Temp” app, which conjures up the temperatures of the CPU or, individually broken down, the values ​​from the cores of the processor onto the taskbar. This means that you always have an overview and know when to switch on the laptop cooler. The download of Core Temp is available from CHIP, among others. A little hint: when installing, make sure to remove the ticks and approvals for additional software - CHIP I want to turn on some accessories ...

The system monitor can be set up individually so that you can see the values ​​you need on the menu bar.

Here the app window with the monitors on the menu bar of macOS.

Core Temp is a clear tool that can be used to measure the CPU temperature in Windows computers.

The temperature values ​​of the CPU cores are conjured up on the taskbar.

Measured values ​​- now it's getting serious!

Now we come to the measured values ​​that I recorded with the named software on the two systems. You can understand the laptop cooler test through the previous statements; hence, without further ado, here are the numbers:

It definitely makes a difference whether you use the laptop on the table or on a special, ventilated and actively ventilating / cooling device. The Lenovo notebook has shown itself to be much more cooperative despite the plastic cover. Why? Because there the CPU fan sucks in air from below and releases it to the side. Both are supported by the AUKEY laptop cooler. With the MacBook, the cooling is realized through the side slots - the cooler mainly supports the heat dissipation on the underside of the device case, but does not actively ventilate the hardware inside - quite a disadvantage of the beautiful Apple design ...

Another notebook cool test in summer?

If I don't forget, I'll repeat the measurements again on a warm summer's day with similar framework conditions. Then the ambient or room temperature should be higher - and this will show whether the AUKEY CP-R2 laptop cooler can confirm its effectiveness. After the first test, however, I can confirm this. In addition, the gadget is well suited for ventilating the laptop and raising its display even without activation.

The AUKEY CP-R2 laptop cooler is always available from Amazon. At times, however, it is not in stock either. Therefore, in addition to the test product, which was made available to me free of charge by AUKEY, I am also giving you other models (the smaller, mobile cooler pads with three or two fans): 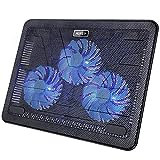 AUKEY CP-R1 with 3 fans
This Notebook Cooling Pad does not have a stand function, only the two small folding feet on the underside. Ideal for on the go and cool thanks to the blue LED light!
Buy it at Amazon Price includes VAT, plus shipping costs (updated: 9.09.2021 at 01: 30 clock)

According to its name, a laptop cooler works to ventilate the computer on it and thus cool it down faster. I did not go into further detail here on the design and structure of the accessory products for laptops and MacBooks. You can see everything on the Amazon pages. However, if you have any questions or comments that are not dealt with there or here in the review, please leave a comment :)