Learn to program: give away an Arduino set for Christmas 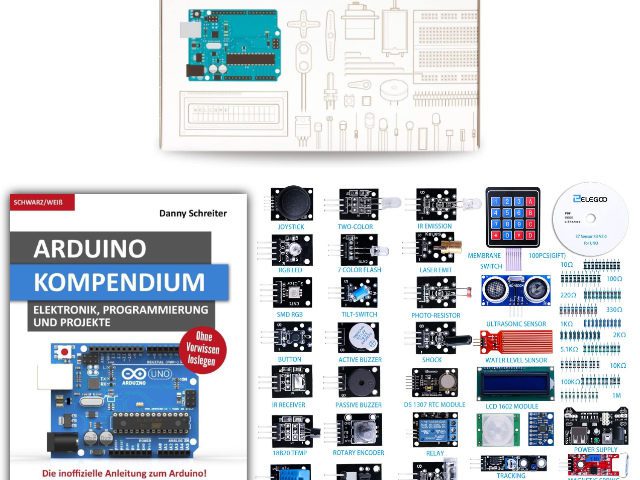 The Arduino board and the components that can be combined with it are ideal if you or someone around you wants to program a device with sensors. Your own alarm system, an automatic system for watering flowers, a weather station with automatic data transmission or a remote-controlled car - with an Arduino you can build different things and learn to program at the same time. In the following I have put together a set of starter kit, sensor and display components and a compendium in book form. You can use it to realize your first projects over the Christmas period or give someone a nice gift :)

Do you want to learn to program or build a device with sensors? Or do you want to make it easier for someone to start their inventor career at Christmas? Then the Arduino board, the sensor kit and the book with explanations and projects are a good idea.

Buy and give away the official Arduino starter kit

The official Arduino starter kit contains the most important elements for all beginners, above all of course the Arduino board. With the more than 100 elements contained in the package, the first projects can already be implemented. A project book in German is also included for this purpose. As you can see from some reviews on the Amazon product page, this is not translated that well and also contains a few technical errors. That is why I would pack this set in a Christmas present, mainly because of the hardware, and include the compendium presented below with a comprehensive introduction and various practical examples that can be recreated.

The Arduino starter kit is a good place to start. But if you take a closer look at the scope of delivery, then the great indication of "over 100 individual parts" is put into perspective. Because most of them are cables, resistors and lights. Of course, they are important and necessary in various combinations for the projects, but tinkering and programming is not really varied with them. If you want to give away the Arduino for Christmas, you can also pack the ELEGOO 37-in-1 component set for more variety and long-term interest. Various sensors, but also an LCD display, loudspeakers and the like are included. 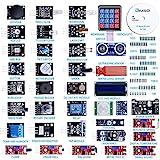 ELEGOO Upgraded 37 in 1 sensor module kit Compatible with Arduino IDE with instructions for ...
Buy it at Amazon Price includes VAT, plus shipping costs (updated: 23.01.2022 at 15: 00 clock)

The "Arduino Compendium" by Danny Schreiter has been published by BMU Verlag and contains the basics of electronics and programming. The imparted knowledge is consolidated through the practical projects also described in the book. So that you can learn everything from scratch, there is an introduction at the beginning with the history of the microcontroller and the creation of the Arduino. There are also basic chapters for hardware and software. After explaining the inputs and outputs (both digital and analog), the first project follows. Then more knowledge and more projects come along. You can take a look at the book on the product page.