Learn to program: give away a Raspberry Pi set for Christmas 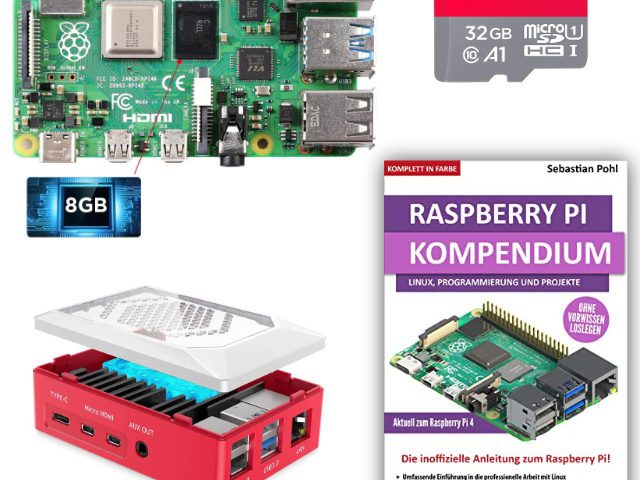 The Raspberry Pi 4 is a very compact, but very powerful mini-computer. The finished Raspberry board, which you can buy for your own expansions, programming projects and the like, offers many opportunities for tinkering and learning to program. Therefore, it can be a good Christmas present for people around you who are interested. In this post I will introduce you to a starter kit and a book that goes with it. This set is suitable as a gift as well as for yourself if you've always wanted to deal with the Raspberry Pi.

Abbreviation for items with Prime Shipping:

Learning to program and realizing your own projects - this is possible with the Raspberry Pi 4 in the all-in-one set and with the right book for the basics and first projects. Ideal in a set as a Christmas present.

The expandable kit consists of a Raspberry Pi 4 (Model B) with 8GB of RAM and 32GB of storage on a microSDHC memory card. Two USB-A ports and two micro-HDMI ports are available for connecting input and output devices. The power supply is regulated via a power supply unit with a USB-C connection.

The ARM processor offers 4 cores, a 64-bit architecture and 1,5 GHz. Chips for WLAN (dual-band, 802.11b / g / n / ac) and Bluetooth 5.0 are also installed. There is also a Gigabit Ethernet connection. A jack connection is available for audio output. The housing has the necessary cut-outs for everything. Fans are also included. 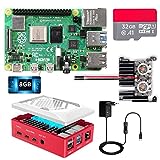 The "Raspberry Pi Compendium" by Sebastian Pohl comes from BMU Verlag and offers all the information you need to get started and your first projects with the mini-computer on 516 pages. After an introduction with the history and the previous models of the Raspberry Pi, there is an overview of the available accessories. Then it continues with the setup, whereby the usable operating systems (Linux distributions) are discussed.

This is followed by a separate chapter on Linux, followed by explanations about programming with Python. It continues with explanations on the subjects of electronics, display elements, displays and LEDs. As with the Arduino, various components can be added and used on the Raspberry Pi. It continues accordingly with chapters on sensors and actuators. The book concludes with more than 10 projects that can be imitated.

What can you build / program with the Raspberry Pi?

With the right knowledge and a little patience, a wide variety of devices and electronic aids can be tinkered with the Raspberry Pi. From the automatic watering system for the houseplants to the remote-controlled car to the smart control element for the smart home, everything is possible. You can also use it to build streaming boxes for the television or projector, although a Fire TV Stick would probably be cheaper here: D With a search on the Internet you will find numerous possible uses and learning projects for the Raspberry Pi. Have fun!