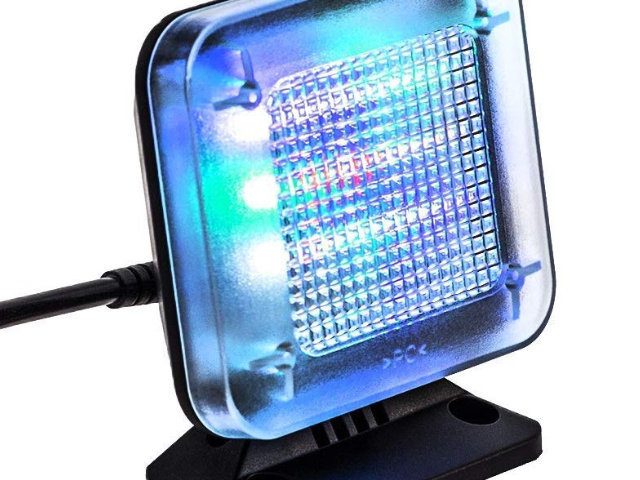 With an LED TV simulator you can simulate the light of a television in an energy-saving manner when you are absent, so that possible intruders think that someone is at home. Such a fake television set as burglar protection is cheap, has low consumption thanks to LEDs and is even offered by manufacturers from Germany at a reasonable price. In this post I will introduce you to a model that is primarily rated as good and very good on the Amazon product page.

An LED TV simulator serves as a fake television and thus as protection against burglary. Equally suitable for holidays, Christmas, New Year's and the night shift. Images: Amazon

There are numerous videos on YouTube in which TV simulators with LEDs are demonstrated and tested. One that also shows the view from outside the house is from a US YouTuber. Here is the video with a test device that is similarly offered as a fake television by the German company mentioned above.

The fake TV from Kobert-Goods serves as protection against break-ins, as it creates a light simulation with color changes that looks like TV light from outside the house. The dummy television has 12 LEDs and 3 programs. Curtains or curtains on the ground floor are also worthwhile, as otherwise you can see by looking into the window whether a television is actually running or whether such a device is being used;)

Fake televisions as protection against break-ins
Modern burglar protection with energy-saving LED lights. Keeps burglars away when you are on vacation, spend the evening or night away or are simply afraid of a break-in. The consumption is less than 3 watts, there are several programs with 4 or 7 hours running time from dusk.
23,99 EUR −3,00 EUR 20,99 EUR
Buy it at Amazon Price includes VAT, plus shipping costs (updated: 14.09.2022 at 12: 56 clock)

Functions and programs of the LED fake TV

The LED TV simulator can be adjusted to different needs and applications. On the back of the device you will find a switch that enables four modes:

Another advantage of the device is the shipping from Germany and the invoice with VAT. In addition, according to the supplier's product description, there is a customer service in German. However, I don't think you need a lot of help with such a simple device. But if it is faulty or if it arrives damaged, you can at least count on support.

Even more security: SecaCam HomeVista trail camera in the test

On Amazon product page you will not only find the LED TV simulator, which is used as a fake television to protect against burglary, but also a number of customer reviews, customer pictures and ratings. A total of 80% of the feedback falls to a full 5 stars; 14% are still positive for the device with 4 stars. Here is a useful comment from a detailed review as a partial quote:

[...] In any case, this device has EVERYTHING I was looking for: several switching options (4 or 7 hours of operation after dark and simply CONTINUOUS operation). Continuous operation can be used with a timer or, for example, with a controllable socket (via WLAN), which was important to me. But this device also just turns on when it gets dark in the room ... Fantastic! Of course, this ensures that it does not always switch on at the same time. [...]

Fake TVs as burglary protection - your opinion on it?

What do you think of this type of burglary protection for vacation, travel or night shift, for fearful people and the holiday home that has been empty for a long time? Do you use an LED TV simulator or do you think that is not a good idea? Feel free to leave a comment on the topic!