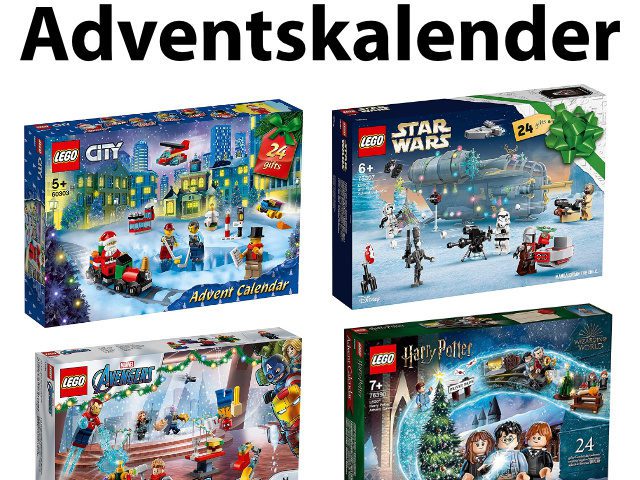 In preparation for Christmas, it is always nice to have an advent calendar that prepares a little bit every day for the big day. Regardless of whether you call it Christmas Day, Tree Day, Gift Festival or something else, the Advent calendar can generate anticipation in any case - and that for young and old. LEGO is the epitome of fun for games and collecting across generations. Accordingly, you will find various LEGO Advent calendars for 2021 in this guide. There is something for both city collectors and franchise fans; there are advent calendars from Harry Potter, Star Wars, Avengers and more.

Selection with Prime Shipping: Get an overview here

You can find a selection of the LEGO Advent calendars for 2021 here. LEGO City, Star Wars, Avengers and Harry Potter can then be played at Christmas. In this guide you will find different years of the anticipation calendar.

LEGO City is a well-known and popular set series among the many offers of the terminal blocks. At Amazon you can get different versions of the urban development advent calendar with Prime shipping. That 60201 September from 2018 offers a Santa Claus and a Christmas tree as well as various other figures, companions, a dog, a snowman and, last but not least, a drone. The anticipation calendar in the is a bit more homely 60235 September from 2019, with a fireplace, grandfather clock, reading chair and the like. The LEGO City Advent Calendar 2021 in 60303 September is relatively balanced and offers different things.

In addition to large sets such as the Death Star or the Millennium Falcon, LEGO Star Wars also offers smaller sets, collectible kits and figures. Advent calendars have also been part of the range for several years. In the current LEGO Star Wars Advent Calendar 2021, i.e. the 75307 September, even baby Yoda is there. Further references to more recent films are also included. There are other mini versions of spaceships, robots and scenes as well as various characters as LEGO figures in the 75245 September from 2019 as well as in 75213 September and in 9509 September.

Even if the main series of books and films have long been completed, there are still many fans of Harry Potter. Accordingly, there is still a lot of merchandise to do with the magician and his adventures with Hermione and Ron. In addition to older Advent calendars, you can also find a LEGO Harry Potter Advent Calendar 2021 with Prime Shipping on Amazon - it is that 76390 September. It is also Christmas-festive 75981 September from 2020. If you want to re-enact Christmas in the great hall at Hogwarts, you can 75964 September from 2019.

Another fan base that can be made happy with a LEGO advent calendar likes to watch superhero films. The Marvel Avengers can also be put together with different sets of clamps and thrown into new adventures. During the Advent season, this is possible with building blocks behind 24 doors. There is not yet a very large selection. However, the LEGO Avengers Advent Calendar 2021 will be available as a 76196 September guided. If this is currently out of stock, you can also use other sets such as 76125, 76191 and 76190 place in self-made advent calendars;)